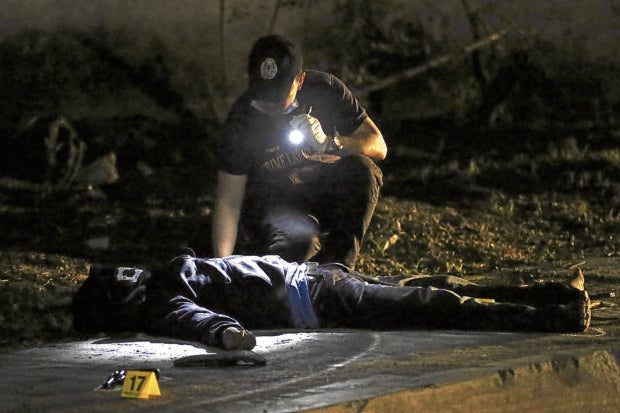 A police investigator inspects the body of a suspected victim of extrajudicial killing. (INQUIRER FILE PHOTO)

MANILA, Philippines — The Philippine National Police launched on Monday its end-game strategy in the war on drugs but used infinity as the program’s symbol to signify an endless and continuous fight against the drug menace.

Health Secretary Francisco Duque III graced Monday’s launch in Camp Crame of the Anti-Illegal Drugs Operations through Reinforcement and Education or Adore, which would primarily focus on addressing narcotics or substance abuse as a “chronic but treatable medical condition.”

Gen. Dionardo Carlos, chief of the PNP, said that Adore was the latest campaign plan for the PNP’s Double Barrel Finale version 2022.

“We would like to have the end-game strategy for this administration by completing the double barrel that we started in 2016,” he said, referring to Adore as a multifaceted reinforcement and education-based strategy.

Carlos committed Adore as an illegal drugs end-game strategy that would be undertaken through the “rehabilitation, recovery and wellness and reintegration of the more than 1.2 million that surrendered” as well as through continuing antinarcotics operations.

He explained that the use of the infinity symbol only meant that anti-illegal drug operations would be continuous.

“To our mind, the best strategy to win the seemingly endless drug war is to counter and conquer the same with continuous implementation of anti-illegal drug programs combined with an endless collective effort of law enforcement agencies, countless interventions from the community and stakeholders, and most importantly the undying mission to protect and serve our people,” he said.

Drug war review goes on until Duterte steps down – Guevarra