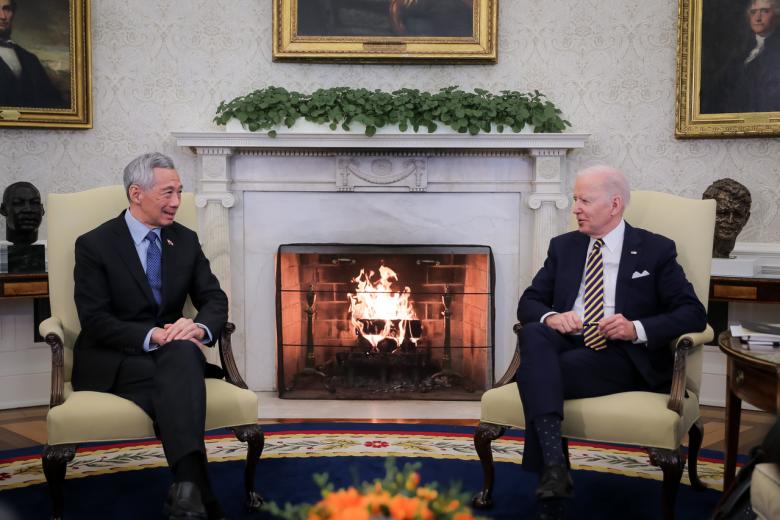 WASHINGTON — The war in Ukraine has implications for the Asia-Pacific, said Prime Minister Lee Hsien Loong at a joint press conference with United States President Joe Biden on Tuesday (March 29).

“There are potential flashpoints and contentious issues in our region too, which, if not managed well, could escalate to open conflict,” said PM Lee, who is on a working visit to the US.

“Countries with interests in the region need to pursue all efforts to settle disagreements through peaceful means so that we can avoid reaching a point of no return,” he added, without specifying any countries.

The two leaders met for an hour at the White House, and afterwards strongly condemned the attack by Russia on Ukraine, now into its sixth week, at a press conference.

Said PM Lee: “The sovereignty, political independence and territorial integrity of all countries, big and small, must be respected. The unprovoked military invasion of a sovereign country under any pretext is unacceptable.”

He said that he and Mr Biden had discussed the measures taken by Singapore to constrain Russia’s capacity to conduct war against Ukraine. These include sanctions and export restrictions.

Mr Biden said Singapore’s “strong leadership in the region” made it clear that Russia’s war was unacceptable to countries in every region, not just Europe.

“Today, Singapore and the United States are united in sending a message to all nations… regardless of size or population, they are equal in their rights on the global stage,” he said.

“They have a right to sovereignty and territorial integrity and to determine their own future, free from violence and intimidation.”

The leaders, who last met in Rome on the sidelines of the G-20 summit in November last year, also discussed peace and stability in the Indo-Pacific, said Mr Biden.

“That includes ensuring that all nations in the region, including China, uphold the principles that enable a free and open region,” said the President, adding that Singapore and the US were both committed to freedom of navigation and the unimpeded flow of maritime commerce in the South China Sea.

They also urged North Korea, which has conducted missile tests in recent months, to return to negotiations and refrain from further provocations.