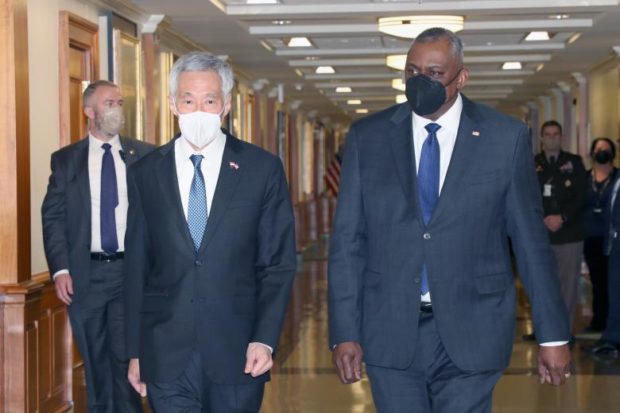 WASHINGTON — Prime Minister Lee Hsien Loong and United States Defense Secretary Lloyd Austin on Monday (March 28) reaffirmed the defense ties between their countries and the importance of America’s presence in the Asia-Pacific region.

They also discussed Russia’s attack on Ukraine, with PM Lee explaining why Singapore took the strong stance it did and Mr Austin expressing appreciation for Singapore’s position.

Mr Lee, who is on a working visit to the US until April 2, called on Mr Austin at the Pentagon, the US Department of Defence’s headquarters just outside Washington.

There, Mr Lee was welcomed by a US military honor cordon, with flag bearers carrying both the Singapore and the US national flags, and personally greeted upon arrival by Mr Austin.

“We share the belief that the US presence in the Asia-Pacific is critical to the region’s continued peace, stability and prosperity, and Singapore continues to support the US military presence in Asia,” said Mr Lee.

Mr Austin, who visited Singapore in July last year on an introductory trip to the region, said Singapore remains one of America’s most valued defence partners.

Mr Austin also called Singapore’s support for US forces “an anchor of America’s presence in the Indo-Pacific”, adding: “Our military cooperation has long helped to ensure security in the region.”

They also discussed international and regional developments, including Russia’s attack against Ukraine, as the largest military conflict in Europe since World War II enters its second month.

Singapore has imposed financial and trade sanctions on Moscow and banned certain goods, including electronics and computers, from being exported to Russia, taking a position stronger than most of its neighbours’ in the region.

Said Mr Lee: “When the conflict in Ukraine broke out, Singapore took a strong stand on principles, because for us, the principle that sovereignty, territorial integrity and national borders should not be violated in contravention of the UN Charter, is fundamental and existential.”

“(Russian leader Vladimir) Putin has greatly underestimated the world’s resolve to impose costs on Russia for its unprovoked aggression,” said the US defense chief.

He added: “Putin’s war of choice underscores the need to defend freedom, a free and open international system, an Indo-Pacific region, as well as Europe.”

Singapore and the US renewed in 2019 the memorandum of understanding regarding America’s use of facilities in Singapore, which was originally signed in 1990.

The US also hosts three Republic of Singapore Air Force training detachments, with a fourth fighter jet detachment in Guam to be established around 2029.

Mr Lee said Singapore was very grateful for the support by the US of its training detachments and exercises, and noted that the two countries have continued to work closely together amid tough global challenges over the years.

“Throughout the Covid-19 pandemic, our air and naval bases, as well as our ports, remained open to port calls, transits, maintenance and repair operations,” said Mr Lee.

“It’s important that we have US forces training side by side with so many of your crews,” the defense chief added.

Mr Lee is scheduled to meet US President Joe Biden and Vice-President Kamala Harris on Tuesday.