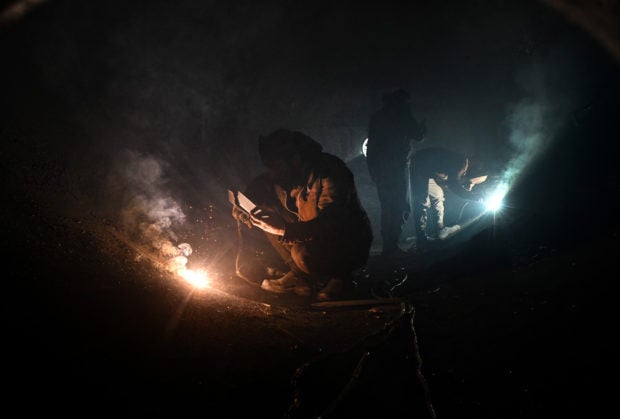 A picture shows a makeshift oil refining installation near the city of al-Bab in the north of the Aleppo province, an area of war-torn Syria that in recent years has turned into a de facto Turkish protectorate, on March 28, 2022. AFP

JOHANNESBURG — Amnesty International on Tuesday slammed “war crimes” in Ukraine, as the civilian toll continues to rise after Russia’s invasion, likening the situation to the Syrian war.

“What is happening in Ukraine is a repetition of what we have seen in Syria,” Agnes Callamard, secretary general of the global rights watchdog, told AFP.

She was speaking in Johannesburg at the launch of the rights group’s annual report on the state of human rights in the world.

“We are beyond indiscriminate attacks. We are in the midst of deliberate attacks on civilian infrastructure,” she said, accusing Russia of turning humanitarian corridors into “death traps”.

“We see the same thing here, just as Russia did in Syria”.

Amnesty’s director in Eastern Europe Marie Struthers concurred, telling a separate briefing in Paris that researchers in Ukraine had “documented the use of the same tactics as in Syria and Chechnya,” including attacks on civilians and the use of arms prohibited under international law.

Comparing the besieged city of Mariupol, to Syrian city of Aleppo, bludgeoned by President Bashar al-Assad, with the help of Russian airpower, Callamard said the rights lobby group’s “observation at this point, is a rise in war crimes,” she said.
– ‘Shameful inaction’ –

The US government last week said public information and intelligence it has collected amounts to strong evidence that the Russian military has committed war crimes in Ukraine.

A senior Ukrainian official told AFP Monday that around 5,000 people have been buried in Mariupol alone.

Russia was the main backer of the Syrian government’s in the war that erupted in March 2011.

Callamard blamed Russia’s “insolence” in the face of a “paralysed international system” and the “shameful inaction” of institutions including the UN Security Council.

“The UN Security Council would be more aptly named the UN Insecurity Council,” she said, adding it had repeatedly failed to act “adequately in the face of atrocities” in such places as Myanmar, Afghanistan and Syria.

She urged that there be no “neutrality” when dealing with Russia.

In a vote at a UN General Assembly on March 2, around 20 African countries refused to take a firm stand against Moscow in a resolution calling on Russia to ceasefire.

“Africa has a role to play,” in the rebuilding of the global multilateral institutions and systems as it has also hard hit by the impact of the conflict and the spike in wheat and fuel prices.

After more than two years of the Covid-19 pandemic, Amnesty reported worrying attacks on human rights as 67 of 154 countries worldwide introduced new legislation to further restrict freedoms “often using the pandemic as justification”.

These include Cambodia, Egypt, the US, Pakistan and Turkey.

Protests were violently put down in countries such as Belarus, Cameroon, Ivory Coast, Chad and Eswatini.

“And when draconian laws and trumped-up charges failed, governments turned to brute force,” she said, urging the lifting of restrictions that have kept hundreds of thousands of children out of school.

Meantime, as the Covid pandemic killed more than six million people worldwide, new wars erupted and unresolved ones worsened in parts of the globe.

With numbers of new infections slowing and vaccination rates up, many countries have gradually scaled back on the pandemic restrictions.

But while Covid vaccination rates in Europe exceed 70 percent, many in low-income countries are yet to receive a first dose.

“From a human rights perspective, 2021 was largely a story of betrayal and hypocrisy in the corridors of power,” Amnesty concluded on vaccine inequality.