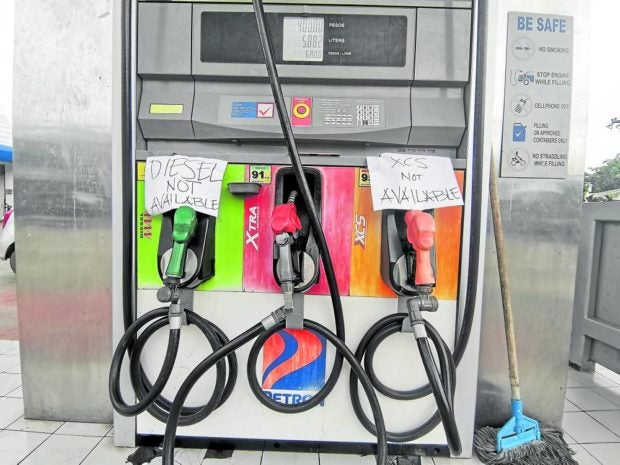 DRY PUMP Several pumps in a gasoline station in Tagbilaran City, the provincial capital of Bohol, run out of diesel on Tuesday as vehicle owners start filling their tanks on Monday night, ahead of the big-time fuel price increase this week. —LEO UDTOHAN

MANILA, Philippines — The right thing to do with the recent round of oil price increases is to suspend oil taxes, like value added tax (VAT) and the excise tax, activist group Bagong Alyansang Makabayan (Bayan) said on Tuesday morning.

According to Bayan secretary general Renato Reyes, such a move from the government is “humane” and “just,” given that the oil price increases implemented earlier neutralized the huge rollback a week prior.

“The latest rise in local oil prices neutralizes whatever rollback happened last week. The government remains intent on maintaining high fuel taxes despite the soaring oil prices and the disastrous effects this has had on the livelihood of drivers, fisherfolk and farmers. There is no decisive action on the part of the regime,” Reyes said.

LOOK: Motorists flock to pump stations in amid an impending oil price hike that would start by Tuesday morning.

Reports say that diesel prices are expected to rise by more than P5/ liter. Gasoline fuel on the other hand may increase by around P3/ liter@inquirerdotnet pic.twitter.com/jIcQm8NErD

“The most humane and just thing to do now is suspend oil taxes so that consumers across the board can benefit and regain their lost income. To allow oil prices to soar and to profit from the misery of the people is simply cruel. The people demand immediate and decisive action,” he added.

Reyes further said that the government must not earn revenues — through the said taxes — while people are suffering from the latest oil price hikes.

He also noted that the subsidies provided by the government are not enough.

“The high world prices are driven by speculation and should not be allowed to be immediately reflected in local pump prices. Consumers need to be protected,” he said.

“The high taxes on oil, particularly VAT, has resulted in windfall revenues for the government. Government earns from the misery of the people. This is patently unjust. The targeted subsidies are not enough to cover the losses suffered by the affected sectors,” he added.

Last March 16, the Department of Finance (DOF) shot down requests to suspend the excise tax on fuel products, proposing instead a P200 per month subsidy for poor families affected by the rising fuel prices.

President Rodrigo Duterte however asked DOF to find ways to increase the allocation to P500 per month.  DOF agreed, but the P500 per month subsidy would be given only for three months, or a total of P1,500 for every poor family.

However, groups have insisted that both the P200 and the P500 assistance are too small right compensate for the rising oil prices, and the chain reaction it causes to the prices of other goods.

On Monday night, a lot of motorists were seen trooping to pump stations, to have their vehicles filled up before oil prices increase.  The lower oil prices on Monday — which ranged around P65 to P75 per liter of either diesel or gasoline — were a result of the huge rollback last March 22.