DBM earmarks subsidy of P500 monthly for 3 months, or P1,500 for poor families 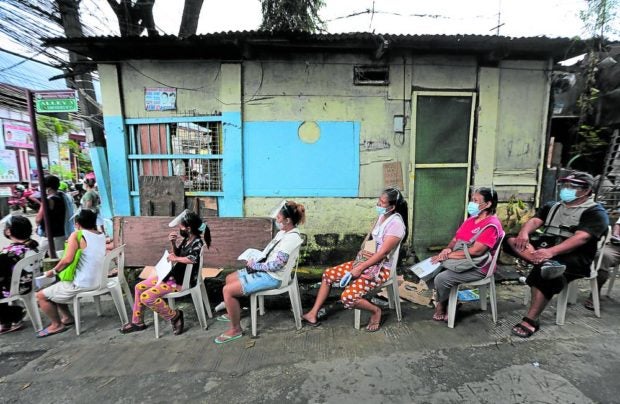 WAITING FOR AID In this file photo taken in August 2021, residents of Payatas village in Quezon City queue to receive cash aid from the government. —GRIG C. MONTEGRANDE

MANILA, Philippines — The P500 monthly subsidy for poor families is only good for three months, a Department of Budget and Management (DBM) official said Wednesday.

“For the next three months—because we anticipate that the revenues accruing from the additional collections from value-added tax (VAT) would be around that vicinity, I think P26 billion, if I’m not mistaken,” DBM Undersecretary Tina Canda said on ABS-CBN News Channel’s Headstart when asked for how long the government can provide the P500 aid.

“So, in that case, it will cover P20 billion for the three-month requirement. That’s P500 per month for three months. So, that’s P1,500 per beneficiary,” she added.

President Rodrigo Duterte earlier approved a P200 monthly subsidy, good for one year, to families belonging in the bottom half of the country’s population amid soaring oil prices.

Later, the President asked the Department of Finance (DOF) to increase the subsidy to P500 as he finds the P200 aid inadequate.

“So, naliitan si presidente (the president finds it meager), he wanted it increased. He ordered, instructed the DOF to find ways to be able to fund a P1,500 requirement for the next three months at least,” she further explained.

Beyond the three months, the government could still provide assistance if the price of oil continues to increase.

“If the price of oil continues to rise, then we will have additional revenues to cover. What we want to balance here is really the increase in the prices of oil which affect our poorest of the poor and balancing it with the appropriation or expenditure side,” she explained.

“So, hopefully, the price of oil would stabilize so that we don’t need to give financial support to our 50-percent population for the succeeding three months,” Canda stressed.

The assistance to poor families will be sourced from additional revenue from VAT of fuel products.

According to the official, the earliest time for the subsidy distribution will be in April.

After 11 weeks of consecutive oil price hikes, consumers are getting relief this week due to a rollback in the prices of petroleum products.