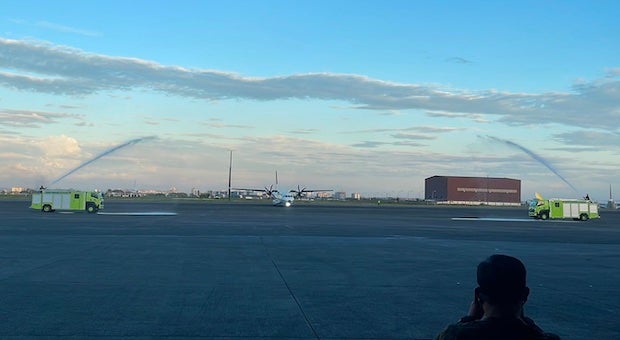 The Philippine Air Force welcomes its newest C-295 plane with a traditional water ceremony. (Photo from the PAF)

The plane arrived at Clark Air Base in Mabalacat City, Pampanga at around 5:00 p.m., according to a PAF statement.

The new plane is the first of the three C-295s that the Philippines acquired under its Medium Lift Aircraft Acquisition Project under the Government Procurement Reform Act.

The C-295s were acquired from Airbus Defence and Space of Spain.

“The 220th Airlift Wing of the Air Mobility Command will operate these aircraft which will be utilized to transport troops and equipment to various parts of the country,” the PAF said.