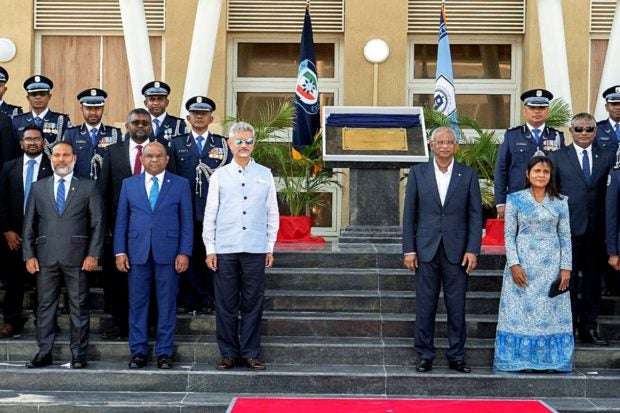 NEW DELHI — Amid the ongoing visit of External Affairs Minister (EAM) S Jaishankar to the Maldives, a Memorandum of Understanding (MoU) was signed between the Sardar Vallabhbhai Patel National Police Academy (SVPNPA) and the Maldives Police Force on Sunday to support the upgrading of police infrastructure across the archipelago.

The MoU was signed on the sidelines of the inauguration ceremony of Maldives’ National College for Policing and Law Enforcement (NCPLE) where the EAM spoke.

“MoU signed today between @svpnpahyd and Maldives Police Force will grow NCPLE’s capacities and help it become a regional centre of excellence. Will also support the up-gradation of police infrastructure across #Maldives through an additional initiative,” EAM Jaishankar said in a tweet.

“One of India’s largest grant-funded projects in the Maldives, the NCPLE will be the hub for a modern Police force in the years to come. The NCPLE will serve to strengthen the traditions of exchanges and training between the Police forces of Maldives and India,” Jaishankar added.

Jaishankar congratulated the Maldives Government and its people on the successful completion of NCPLE during his remarks at the ceremony.

“This venerable institution has left its imprint in many ways of making modern India. I emphasise that its contribution in the realm of foreign policy has been particularly strong. A score of foreign service officers have passed through its gates over the decade and currently, both the External Affairs Minister (Jaishankar) and Foreign Secretary (Harsh Shringla) have had the privilege of studying here,” he said during the speech.

India’s External Affair Minister S Jaishankar is on a two-day visit to the Maldives on March 26-27 after he got an invite from his Maldivian counterpart.

“…discussed the special partnership between our two countries that has produced so many substantive outcomes during his tenure,” he said.

The EAM also met the Home Minister of the Maldives Imran Abdulla.

Warship from Maldives with virus evacuees arrives in India

India disturbed by declaration of emergency in Maldives