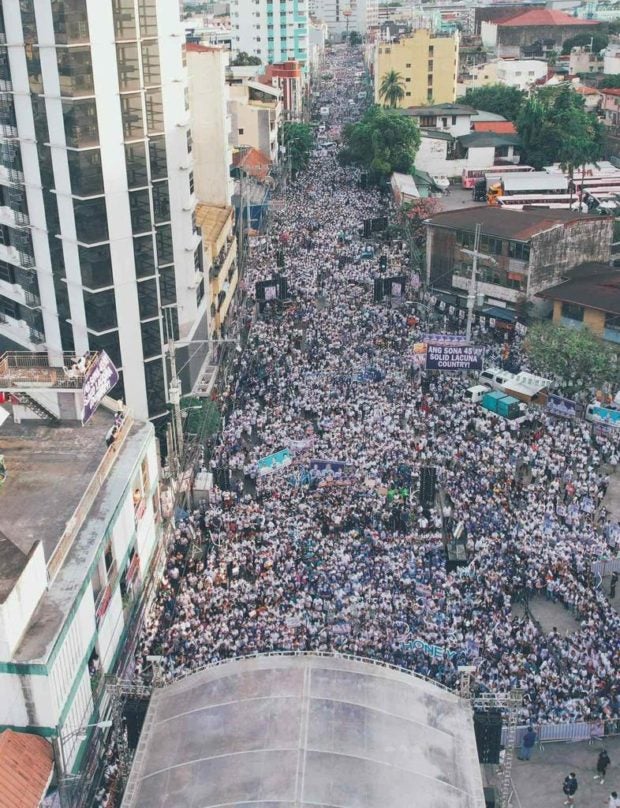 MANILA, Philippines — Aksyon Demokratiko standard bearer Isko Moreno Domagoso  assured his party mates  that he intends to finish and win the presidential race with the help of God and the support of the “silent majority” of Filipino voters.

He said this in a the proclamation rally which was attended by some 25,000 Manileños Sunday evening.

It was the the third straight day that Moreno attended a proclamation rally, this time in his home court in the City of Manila where his vice mayor, Dr. Honey Lacuna, is now running for mayor with 3rd District Congressman Yul Servo Nieto as her vice mayoral candidate.

As in Moreno’s two-day sortie in Batangas province, the Asenso Manilenyo grand proclamation rally in Manila Sunday was a crowd-drawer with an estimated 25,000 Manila residents attending the gathering on Earnshaw Street in Sampaloc District beginning 5 pm.

In Lipa City Friday, 65,000 Batanguenos waited for nine hours to see and hear the 47-year-old presidential candidate talk about his platform of governance that centers on “Life and Livelihood” and his 10-Point Bilis Kilos Economic Agenda.

In Sto. Tomas, Batangas, some 30,000 people trooped to the open area where the proclamation rally of local candidates was held. Once again, the crowd waited for Moreno to speak which was met with loud cheering and applause.

Moreno admitted that being human, it’s only natural for him to sometimes get discouraged particularly when dealing with or experiencing tough situations in life. 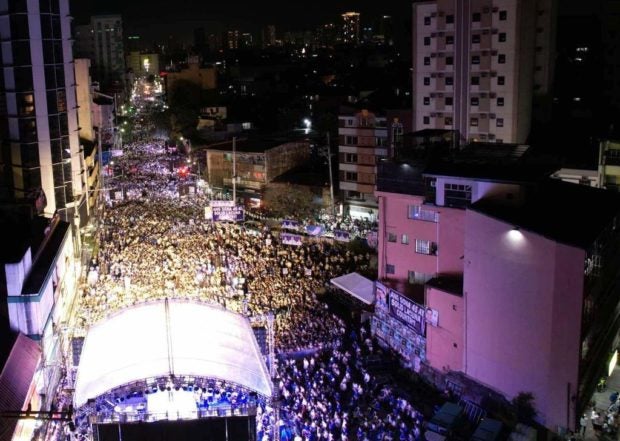 And being the father of the nation’s capital, Moreno said it’s normal for him to also seek the help of his “sons and daughters.”

During his speech which lasted almost 50 minutes, Moreno also asked their thousands of supporters to vote for Lacuna and Nieto so that the gains they have started in 2019 will continue in the next three years.

Moreno, meanwhile, did not discount the possibility of another senatorial candidate being part of their campaign sorties after former Senator JV Ejercito was among the candidates who spoke during the proclamation rally.

Asked if he was able to talk to former Manila Mayor Estrada about the possibility of his son joining them in their campaign sorties to show their appreciation to them, Moreno answered in the negative.

“Recently wala pa because of the situation of the pandemic but I’m happy he survived. It’s very painful to die that way, we know what’s going to happen next, ‘di ba? Malungkot. But, I’m happy so far from what I heard he’s okay and ito man lang eh makalingon man lamang kami kahit papaano dito man lamang sa Maynila,” he said.

When informed that it was also in Earnshaw Street that candidates of Asenso Manilenyo were proclaimed during the 2019 elections. Moreno said he is confident that Manila voters will be able to deliver the votes for the first female mayor and hopefully the first mayor of Manila to become president of the country.

“May awa ang Diyos, may awa ang Diyos. Medyo buenas kami dito sa kambal na simbahan and we did try to make it on a Sunday para hindi namin kayo maabala kasi it’s a busy street also. I’m happy that Manila is experiencing traffic again because there is commerce and jobs so, we don’t want to disturb that. That’s why we opted not to do it on the 25th but to do it today,” Moreno said.

“And, yes, it’s very symbolic for us because there is a huge success in our local party in terms of producing elected officials na binigyan ng pagkakataon ng ating mga kababayan,” he said.

Isko Moreno a ‘no brainer’ choice for Duterte supporters