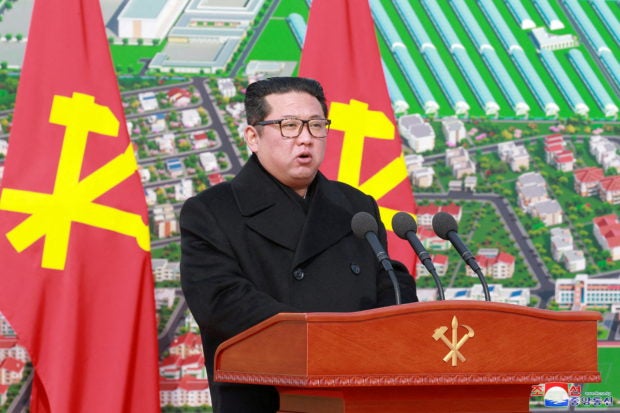 SEOUL  – North Korea will continue to develop “formidable striking capabilities” that cannot be bartered or sold for anything, leader Kim Jong Un said, according to state media on Monday, as he visited workers involved with the country’s biggest missile test.

Kim was meeting with officials, scientists, technicians and workers who contributed to a missile launch on Thursday, which North Korea said was its largest intercontinental ballistic missile (ICBM), state news agency KCNA reported.

“Only when one is equipped with the formidable striking capabilities, overwhelming military power that cannot be stopped by anyone, one can prevent a war, guarantee the security of the country and contain and put under control all threats and blackmails by the imperialists,” Kim said, according to the report.

While personally overseeing the test on Thursday, Kim said the new ICBM was to help deter any military moves by the United States, which remains technically at war with the North after the 1950-1953 Korean War ended in an armistice rather than a peace agreement.

Washington has sought to pressure Pyongyang into surrendering or reducing its arsenal of nuclear weapons and ICBMs, which may be able to strike targets in the United States.

But Kim said his self-defence force “can not be bartered nor be bought with anything” and will be held firm without the slightest vacillation despite harsh trials and difficulties.

The United States said on Friday it will push United Nations sanctions on North Korea to be strengthened over “increasingly dangerous provocations,” but China and Russia signaled opposition and instead argued for such measures to be eased.

North Korea said Thursday’s missile was the Hwasong-17, and Japan and South Korea confirmed that flight data showed the launch flew higher and longer than any previous North Korean test.

But analysts said that state media coverage appeared to be trying to pass off footage from a previous launch, and South Korea’s Yonhap news agency reported on Sunday that intelligence officials in Seoul and Washington believe the North actually tested an older and slightly smaller Hwasong-15 ICBM.