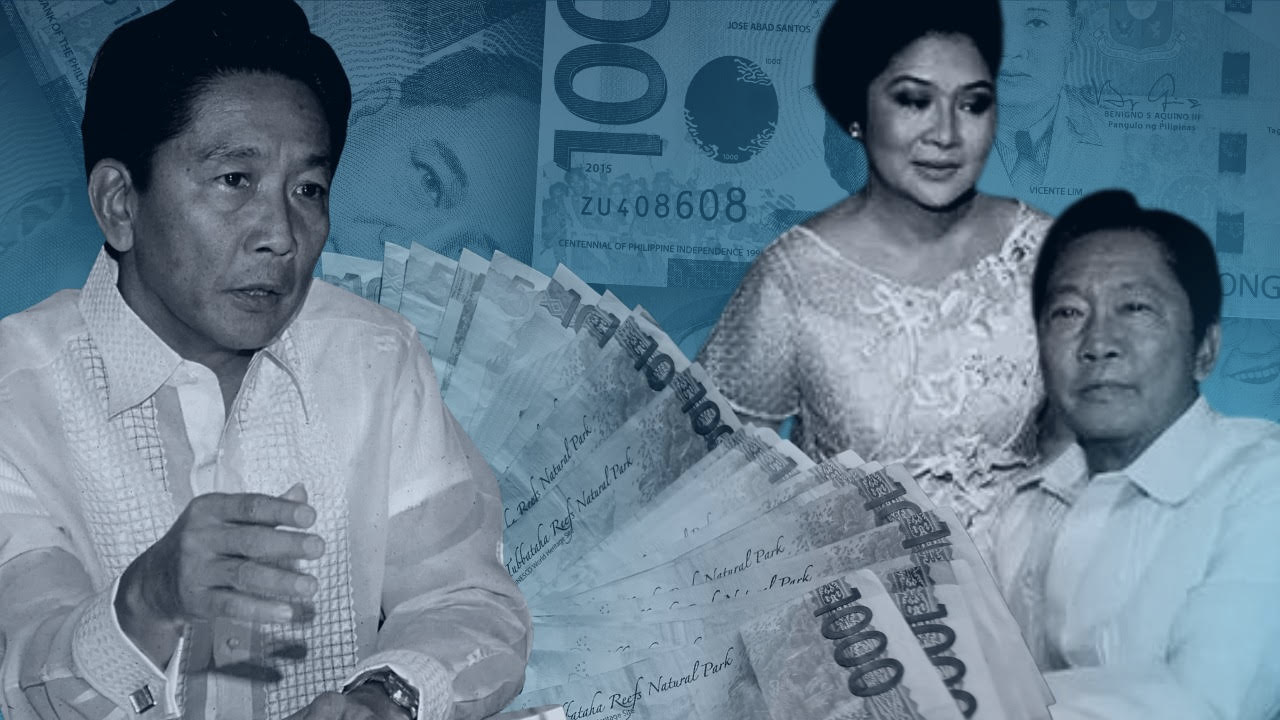 MANILA, Philippines—It would take more than one lifetime to count 203 billion but social media is now abuzz with what can be bought or done with that amount in pesos, a figure culled from the supposed unpaid estate taxes of the Marcos family which the Bureau of Internal Revenue (BIR) has confirmed that it was trying to collect.

As the COVID crisis continued to drain the country’s resources, already devoted to health care and the Build, Build, Build infrastructure program, 203 billion in pesos is simply too substantial an amount to ignore.

Two years since the COVID crisis hit, the Philippines already eased its restrictions, with the government saying that Alert Level 1 will benefit 62 percent of the economy and deliver a P9.4 billion “output” every week. Multiply that by 21 and you get about 203 billion.

This, as the government debt was expected to reach a historic record high of P13.42 trillion by the end of 2022. Last March 4, the Bureau of Treasury said the outstanding debt already hit the P12 trillion mark last January.

To cope with rising expenses for COVID response—especially to buy vaccines—the Philippine government has been resorting to borrowings, or loans, which are close to breaching the 60 percent GDP mark which international debt watchers consider as manageable.

As a result of a decline in actual revenue but a surge in spending because of the pandemic, the Philippine government had also breached its deficit records, hitting 1.33 trillion pesos in budget deficit in November 2021 alone, which nearly matched the full-year fiscal gap in 2020.

As the need for programs to ease the economic impact of the pandemic, now aggravated by the impact on oil prices of Vladimir Putin’s campaign to destroy Ukraine, the Department of Finance sees only one way to avoid economic disaster—make revenues outpace or at least equal spending. In other words, the Philippines should start living within its means. 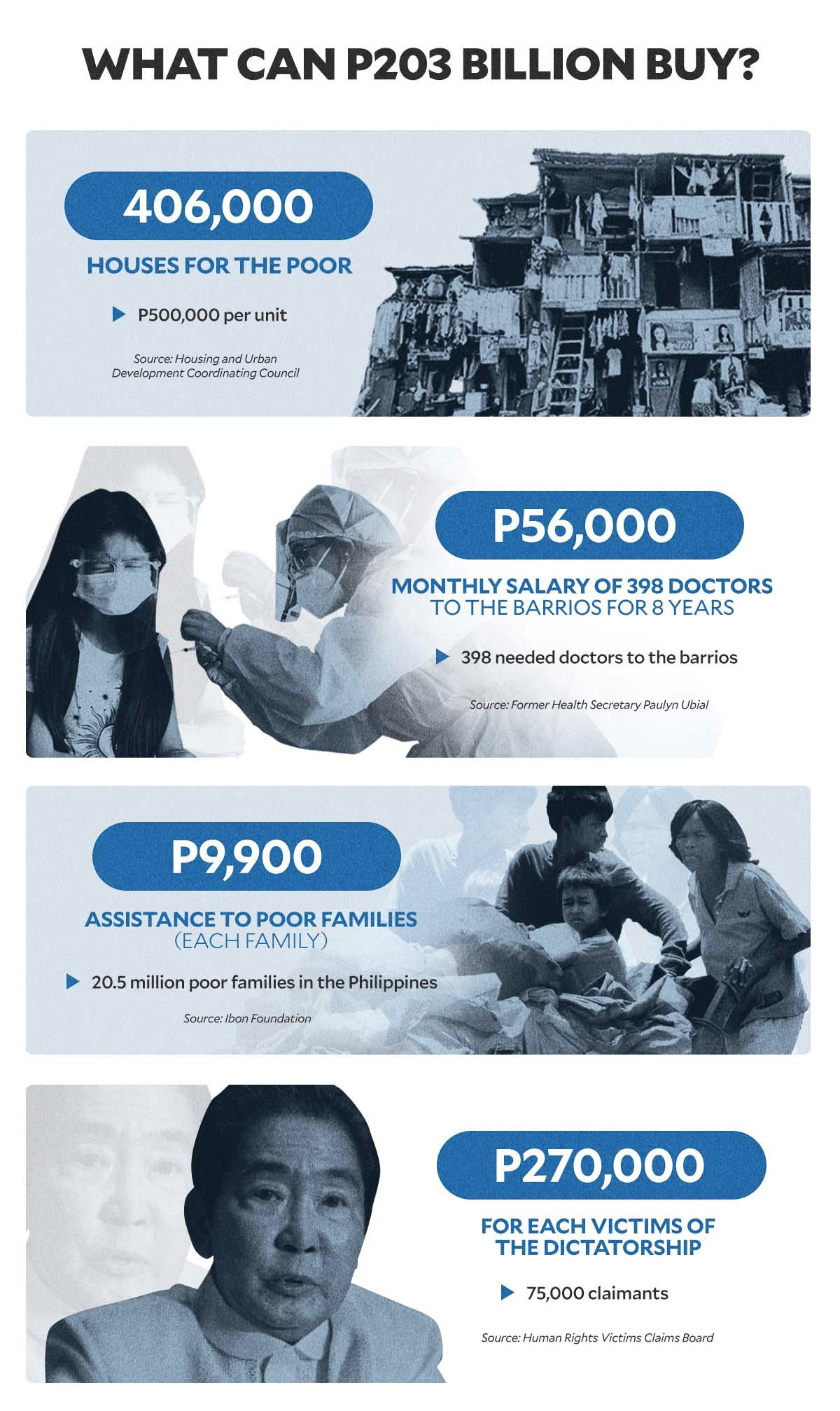 Assistant Finance Secretary Paola Alvarez told CNN Philippines last March 18 that generally, “we have been pushing the Bureau of Internal Revenue (BIR) and the Bureau of Customs to collect revenues and to look for sources of revenue.”

This was her response when asked about the unpaid P203 billion estate tax of the heirs of the late dictator Ferdinand Marcos. She said, however, that she was “not privy” to how the BIR has been handling the tax collection issue involving the Marcoses.

Ernest Ramel, chair of Aksyon Demokratiko, the party of Manila Mayor Isko Moreno, who is seeking the presidency, asked the BIR to demand payment from the Marcoses.

The BIR, through Commissioner Caesar Dulay, responded last March 14, saying that the bureau did send a written demand to the Marcoses on Dec. 2, 2021 to collect the estate tax.

Former Supreme Court Associate Justice Antonio Carpio said because of “interests and penalties” the estate tax, which was only P23.29 billion in 1997, had grown to P203 billion.

Lawyer Vic Rodriguez, the spokesperson of Bongbong Marcos, who is now running for president and leading opinion polls, said the estate tax has not yet been settled because the properties linked to the case are still in litigation.

However, the Presidential Commission on Good Government stressed that the BIR “already executed its final assessment” on the properties involved as early as 1993 and that in 1997, the resolution on their tax valuation had become “final and executory”.

Last Saturday (March 19), as the Commission on Elections held its first presidential debate for the 2022 elections, candidates for president, like Moreno and Vice President Leni Robredo, said the unpaid estate tax could help the poor and the economy.

Moreno said the 203 billion pesos could be used to help drivers and farmers who were hit by the surge in oil costs and basic commodities and services as a result of Putin’s war. But social media is already teeming with suggestions on how to use the enormous funds. INQUIRER.net lists some of them.

When Deputy Ombudsman Cyril Ramos said in 2019 that the government lost P670 billion in 2017 and P752 billion in 2018 to corruption, he stressed that P700 billion is enough to construct 1.4 million houses.

RELATED STORY: Corruption scandals under Duterte: From whiff to helplessness

The cost of one house, according to the Housing and Urban Development Coordinating Council, is at least 500,000 pesos. This would mean that P203 billion is enough for 406,000 houses for the poor.

In 2020, the Philippine Statistics Authority said that as shown by the Annual Poverty Indicators Survey, only 64.1 percent of Filipino families own their homes.

In 2016, then Health Secretary Paulyn Ubial told CNN Philippines that there’s a lack of doctors who are willing to go to rural areas and provide health care services there.

She said the Doctors to the Barrios Program of the Department of Health can have 398 doctors with a monthly salary of P56,000 each. If the 203 billion pesos would be spent on this, the amount would be enough for the monthly salaries of 398 doctors for at least eight years.

However, with rising costs of oil and basic commodities and services, the government will only give P500 every month to 12 million households for three months. IBON Foundation said coverage should be 70 to 80 percent of poor families.

The think tank said a P10,000 assistance for one or two months is “very much called for,” stressing that it will be a significant fiscal stimulus for the economy. The P203 billion is enough to give the poor a one-time P9,900 assistance per family.

The New York-based Amnesty International said the Marcos dictatorship killed 3,257 individuals; tortured 34,000 and imprisoned 70,000 people. The Human Rights Victims Claims Board, which was created by law, said there had been 75,000 victims who filed for compensation.

In 2018, 11,103 victims of rights violations committed by the dictatorship were expected to receive indemnification. This represents only 14 percent of the over 75,000 filed claims.

The P203 billion is enough to compensate the victims of the dictatorship at least P270,000 each.

In 2021, there was a P9.83 billion budget for the Supplemental Feeding Program and School-Based Feeding Program of 3 million children, according to the office of Sen. Grace Poe.

The United Nations Childrens’ Fund said, every day, 95 children in the Philippines die from malnutrition. The P203 billion is enough to feed 12 million children aged five to 11 years old for five years.

The National Wages and Productivity Commission set the minimum wage in Metro Manila at P500 to P537, but labor activists said it should be raised to P750 for the entire Philippines.

The Philippine Health Insurance Corp. (PhilHealth) said last year that as of Aug. 24, 2021, it owes hospitals a total of P21.1 billion worth of unpaid claims.

Dr. Benjamin Pague, acting senior manager of PhilHealth’s information management, said that on average, it took the agency 44 days to process a hospital claim in the last two years—2020 and 2021.

The P203 billion is enough to pay PhilHealth’s debt nine times over.

The Commission on Higher Education (CHEd) said on March 4 that it has suspended freshman applications for its scholarship program, citing “budget inadequacy.”

Half scholarship offers annual financial assistance of P60,000 for scholars enrolled in private HEIs, and P40,000 for those in SUCs.

In Manila, a 10-story hospital, the Bagong Ospital ng Maynila, is set to open this year. It was one of the flagship projects of Mayor Isko Moreno which started in June 2020.

This fully-air conditioned hospital, which has a bed capacity of 384, including 12 intensive care units, is worth P2.3 billion. The P203 billion is enough to construct 88 more hospitals like the one in Manila.

Data from the Education Facilities Division of the Department of Education said an eight-story school building with 40 classrooms cost P80.5 million.

In 2017, the Alliance of Concerned Teachers said the classroom shortage in the Philippines is 113,995. With P203 billion, it’s possible to construct 2,500 new 8-story classroom buildings.

To encourage more people to join the teaching profession, Sen. Win Gatchalian recently pushed for higher salaries for public school entry-level teachers. He said it should be raised to P30,000 per month instead of the present P25,439.

The P203 billion is enough to raise the entry-level pay for three years.