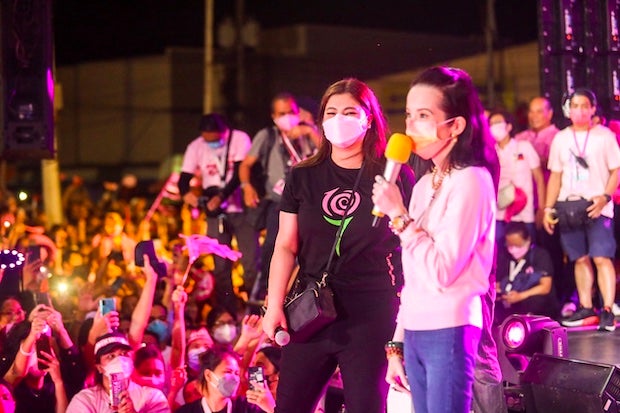 MANILA, Philippines — A visibly weak Kris Aquino showed up in Tarlac City on Wednesday to endorse Vice President Leni Robredo at her grand rally, urging voters to fight against the return of a dictatorship.

The youngest sister of the late President Benigno “Noynoy” Aquino III spoke more slowly than usual as she explained why she was endorsing Robredo.

She also took notice of Robredo’s simple lifestyle, staying in the same house since she was a member of the House of Representatives, which Aquino said indicated no corruption.

“And she has respect for the law. She fights for democracy,” Aquino said. “I’m appealing to you: Let’s not allow this to disappear again. Let’s fight for our rights so that dictatorship will never return.”

At the Tarlac City rally, the actress revealed that, after her brother died in June 2021, she found a letter that he had written. It was addressed to Robredo.

“When Noy died, there was a letter I read that was addressed to VP Leni,” Aquino revealed at the rally. “It was not sent. I will not reveal what else it contains because that’s confidential. But there’s one paragraph that really touched my heart: Noy said that of all people — meaning of all the party mates — she was the one with a single view, a single vision.”

Robredo and the late president belonged to Liberal Party.

“In other words, Noy said: It’s only in you that I see sincerity and ability — [the attitude] that put other people first before self,” Aquino went on. “ And you know, when I read that, I said to myself: You have to fight for her because it was her that impressed Noy. And it’s true. They both have a lot of qualities that are similar. Number one: Whatever is thrown at them, they won’t retaliate.”

Aquino also noted that her brother and Robredo were both hard workers — and not fond of posing while at work.  She said both also shared an incorruptible attitude.

The actress has been suffering from an autoimmune disease that has kept her weak, although she has been subjected to several experimental treatment methods.

She is scheduled to leave for abroad to undergo a series of tests. So she was leaving up to her close friend, actress Angel Locsin, to campaign for Robredo. 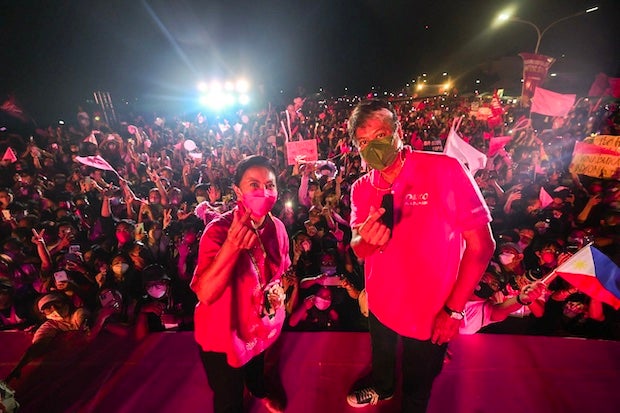 Running mates Vice President Leni Robredo and Sen. Francis Pangilinan at their grand rally in Tarlac City on Wednesday, May 23, 2022. (Photo from the Facebook of VP Robredo)

‘Worth all the risk’

According to Kris Aquino, her doctors advised her not to go out. But she felt it was worth the risk to endorse Robredo in Tarlac, the home province of her parents.

“Number one: It was just nine months ago when Noy suddenly died.  But I learned yesterday that… the grand rally of VP Leni would be in Tarlac. So I said: ‘I’m going, and nobody can stop me.’ That’s it, okay. If you know knew how many were nervous of what I’ve been giving for everyone” Aquino said.

“But I said: ‘For my dad, the Filipino was worth dying for.’ For me, stepping back here in Tarlac is worth all the risk because I want to thank you: You did not leave us. You did not forsake us.,” she said.

Robredo is running for president in the May 2022 elections against several other candidates, including former Sen. Ferdinand “Bongbong” Marcos Jr. — son of her father’s nemesis.

Ninoy Aquino’s assassination in 1983, under the Marcos regime, sparked a series of demonstrations that ultimately led to his widow Cory running for president and challenging the older Marcos.

Currently, the Marcoses have a huge chance of returning to power — if the latest survey conducted from Feb. 18 to 23 by Pulse Asia proves to be accurate. That survey shows Marcos Jr. leading by a wide margin over second-placer Robredo.

However, Robredo’s allies claim that she has been closing up the gap.

Kris Aquino scheduled for bone marrow biopsy, endoscopy to rule out other illness