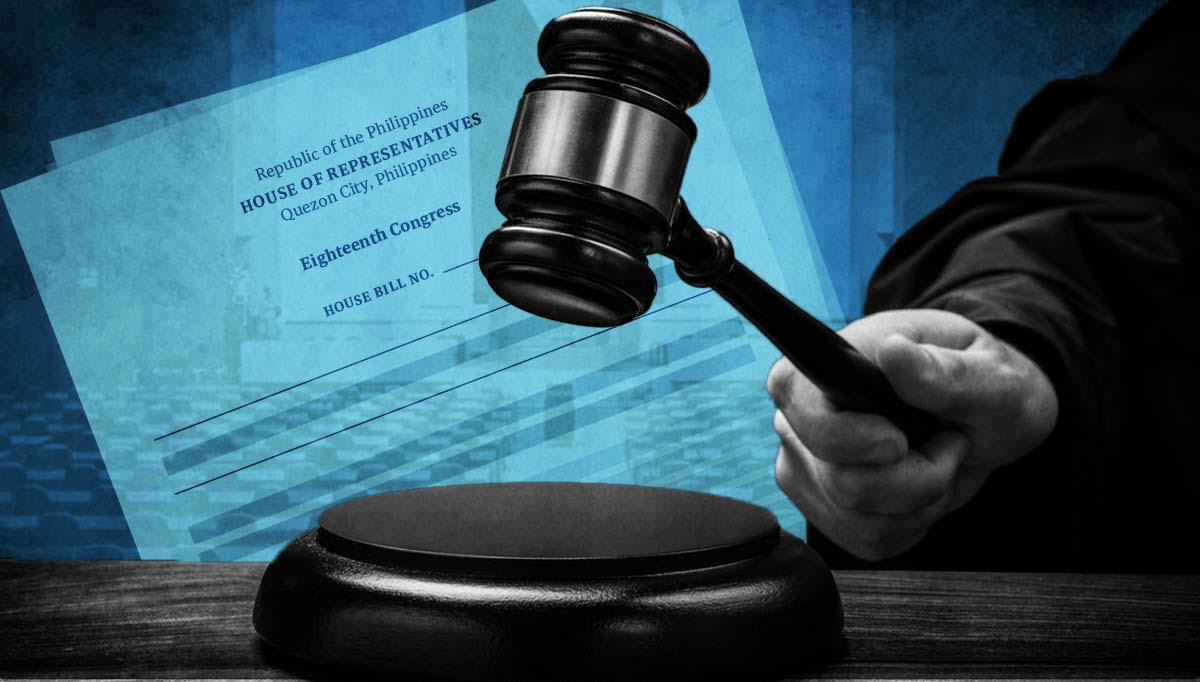 MANILA, Philippines—It was in 2019 when the House of Representatives passed a bill to legalize motorcycle taxis, but the one in the Senate, which was needed for proposed legislation to become law, came to a standstill.

This was the reason that new bills—HB No. 10571 and Senate Bill (SB) No. 1341—were filed in the 18th Congress to seek the legalization of motorcycle taxis as a mode of public conveyance.

There is a need for a law since Republic Act No. 4136—or the Land Transportation and Traffic Code—limits public conveyances to four-wheeled vehicles.

Sarmiento, who said that “we’re already done with our homework,” sent Poe a letter on Feb. 14 to seek the assistance of her office for the immediate passage of SB No. 1341, the Senate counterpart of HB No. 10571.

It was on Jan. 31 when the House of Representatives, with 189 votes, passed HB No. 10571 on third and final reading. Sarmiento told INQUIRER.net that the passage took two years since “we did not want to commit any mistake.”

Poe responded on Tuesday (March 22), saying that considering the support that SB No. 1341 got when it was sponsored in 2020, “we can reasonably expect a swift passage.”

She told INQUIRER.net that she committed herself to advance the bill for the Senate’s consideration once session resumes on May 23. Two Senate committees already approved the bill on Feb. 13, 2020. 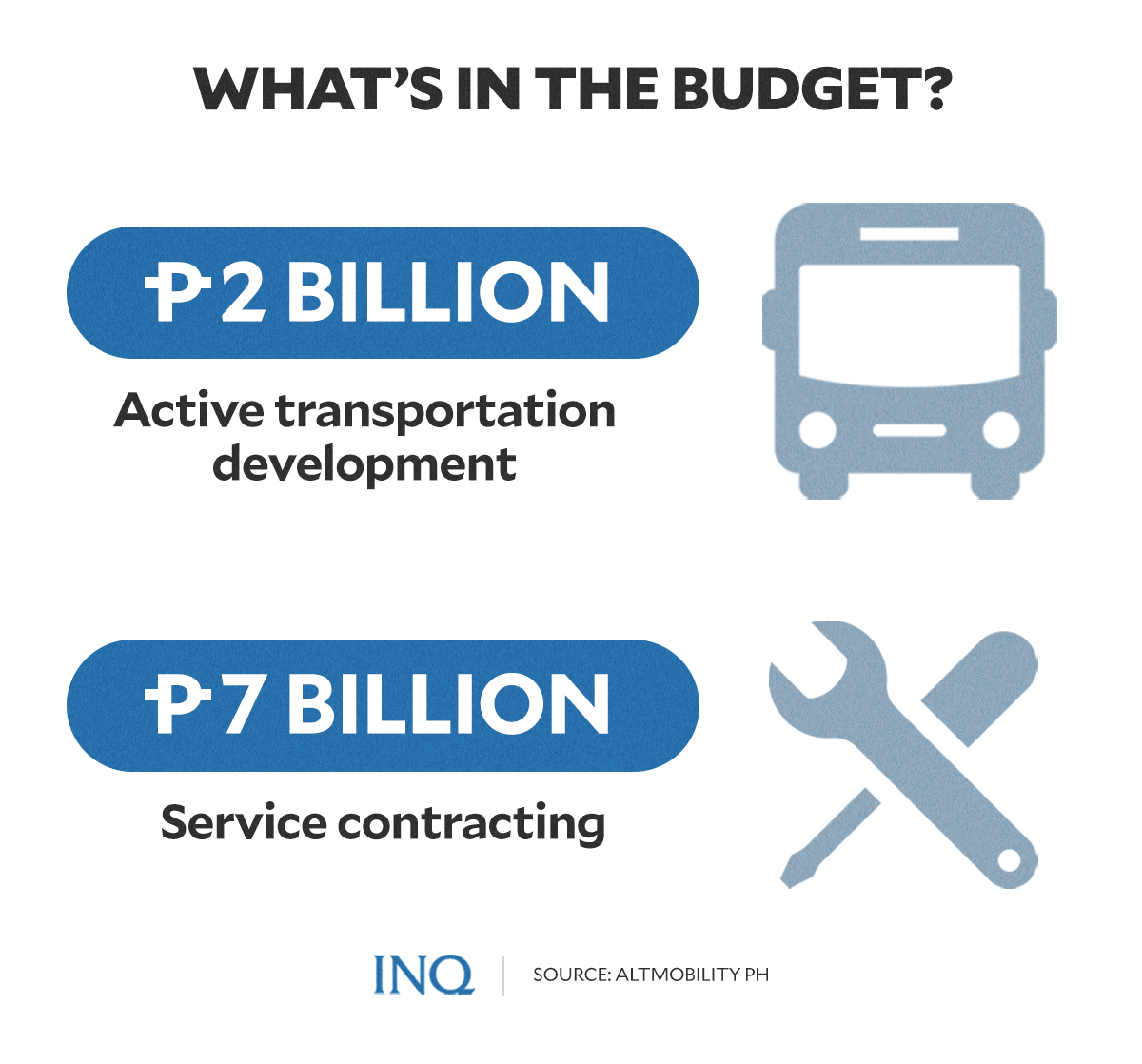 The session will end on June 3. This indicates that the Senate should swiftly pass SB No. 1341. As Sarmiento said, he is asking that the bill be heard in the Senate and hopefully, signed into law by President Rodrigo Duterte before June 30, Duterte’s last day in office.

Before a bill becomes a law, the Nicolas and De Vega Law Offices said, legislation undergoes a process in both the House of Representatives and the Senate. 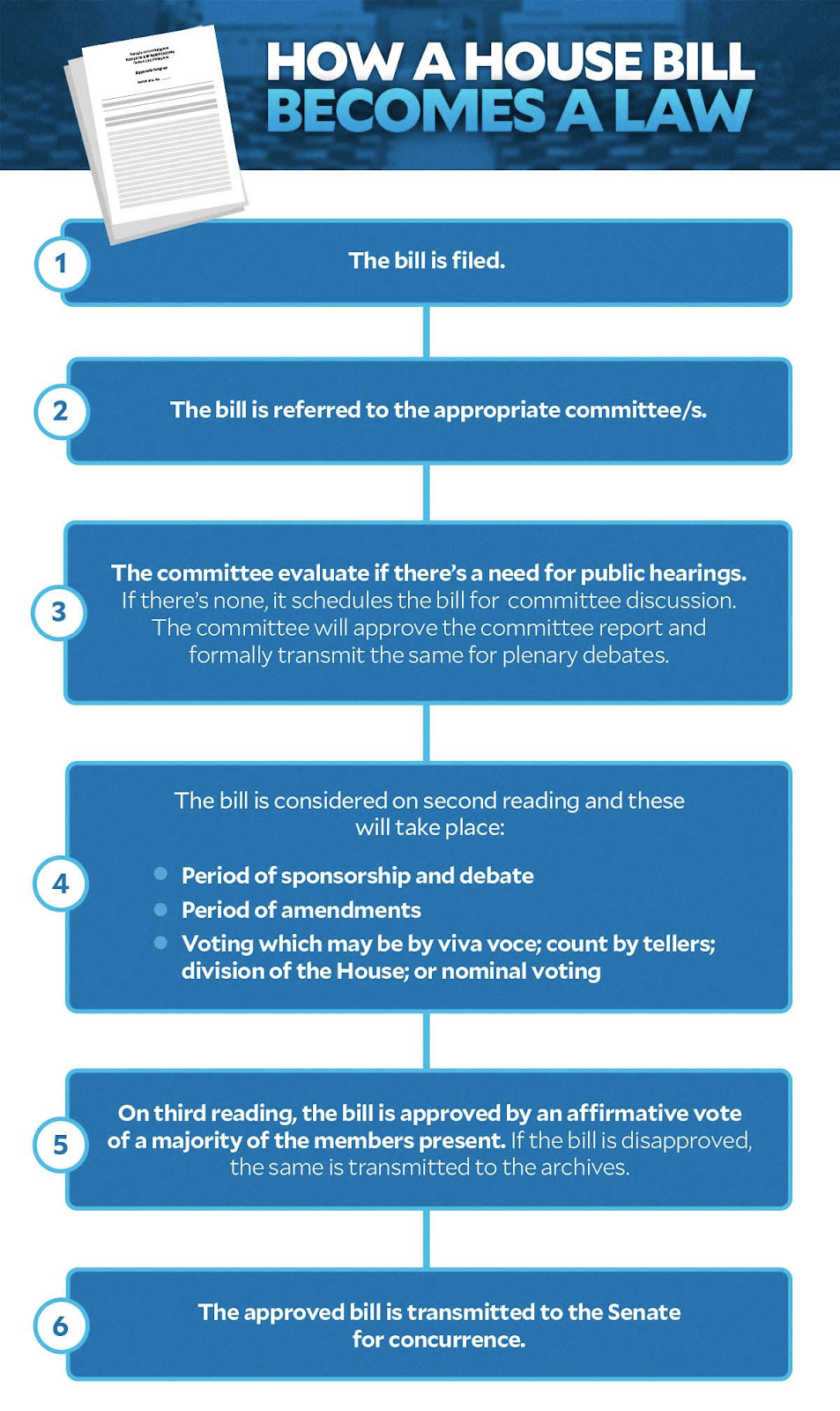 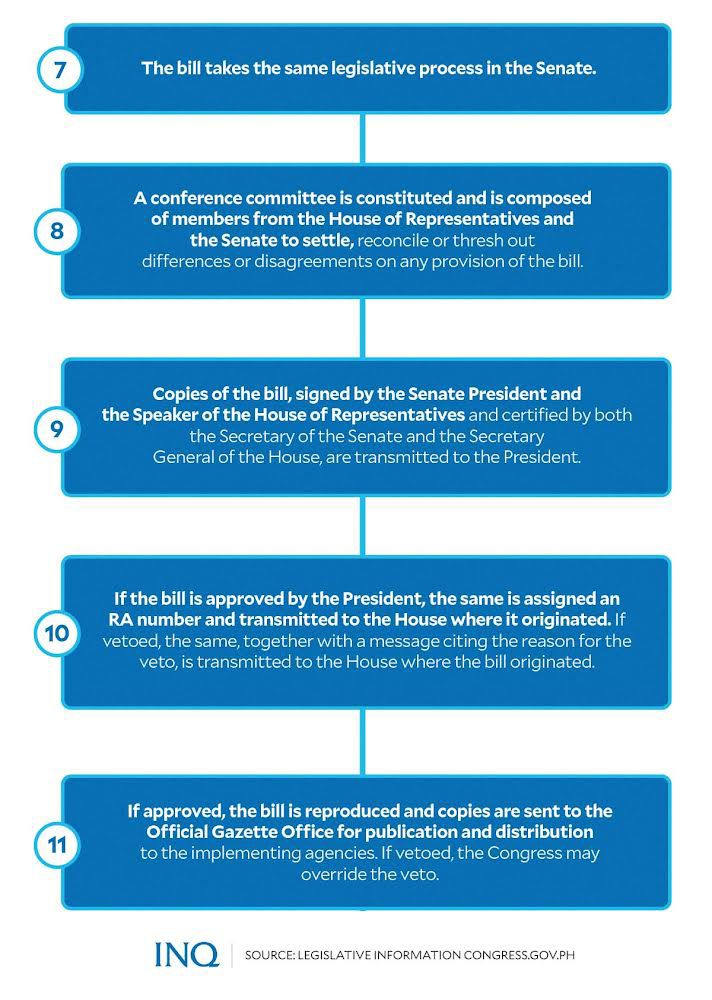 The Senate website explained that the procedures for introducing legislation and seeing it through committees are similar with those in the House of Representatives.

Here’s how a bill becomes a law:

When it is introduced in the Senate, the Member should file it with the Office of the Secretary.

The Speaker or the Senate President will refer the bill to the appropriate Committees. For instance, the bills to legalize motorcycle taxis were referred to the Committees on Transportation and Public Services.

If the committee finds that there’s no necessity to conduct public hearings, the bill will be immediately considered for committee discussion.

Once the committee ends the public hearings or committee discussions, the introduction of amendments, consolidation of bills, or the proposal of a substitute bill takes place. The committee report will be prepared.

The committee will then consent to the report and will formally transmit the same to the Plenary Affairs Bureau.

The committee report is registered and numbered by the Bills and Index Service. It is included in the Order of Business and referred to the Committee on Rules, which will schedule the bill for consideration on second reading.

The Secretary General or the Secretary will then read the number, title and text of the bill and the following takes place:

The Secretary General or the Secretary will only read the number and title of the bill. A roll call or nominal voting is called and a lawmaker, if he desires, is given three minutes to explain his vote. No amendment on the bill is allowed at this stage.

The bill is considered passed on third reading when there is an affirmative vote of a majority of the Members of the House of Representatives or the Senate who are present. If the bill is disapproved, the bill is transmitted to the Archives.

Generally, the three readings should be done on separate days and that the printed copies of the bill in its final form should be distributed 3 days before the casting of votes.

However, there is an exception—when the President certifies the need for the immediate enactment of the bill to respond to crises, like public calamity or emergency.

A transmitted bill usually goes to a committee, unless a bill on the same subject has already been reported out by the appropriate committee and placed on the calendar.

The conference committee will prepare a report to be signed by all the conferees and the Chairman. The Conference Committee Report is submitted for consideration/approval of both Houses. No amendment is allowed.

If the President decides to veto the bill, the same, together with a message indicating the reason for the veto, is transmitted to the House of Representatives or the Senate, depending on where it originated.

If vetoed, the message is included in the Order of Business. If the Congress decides to override the veto, the House and the Senate shall proceed separately to reconsider the bill or the vetoed items of the bill.

If the bill or its vetoed items is passed by a vote of two-thirds of the Members of each of the House of Representatives and the Senate, the bill or items shall become a law.

It was in 2020 when 16 senators signed the committee report on SB. No. 1341. This indicated that the proposed law, which will amend the Land Transportation and Traffic Code, will be tackled in the plenary session.

Poe said then that it is high time for the government to recognize the rising demand for motorcycle taxis or motorcycles-for-hire, especially with growing traffic congestion in the Philippines.

“It’s already 2020. It is about time that we harness the power of technology to help us address mobility issues. In terms of numbers alone, shared motorcycles are an untapped resource that we should take advantage of,” she said.

Poe, who committed to advance the bill for the Senate’s consideration on May 23, said her committee need to “reconcile the versions of the two chambers as these happen to be drastically different bills.” 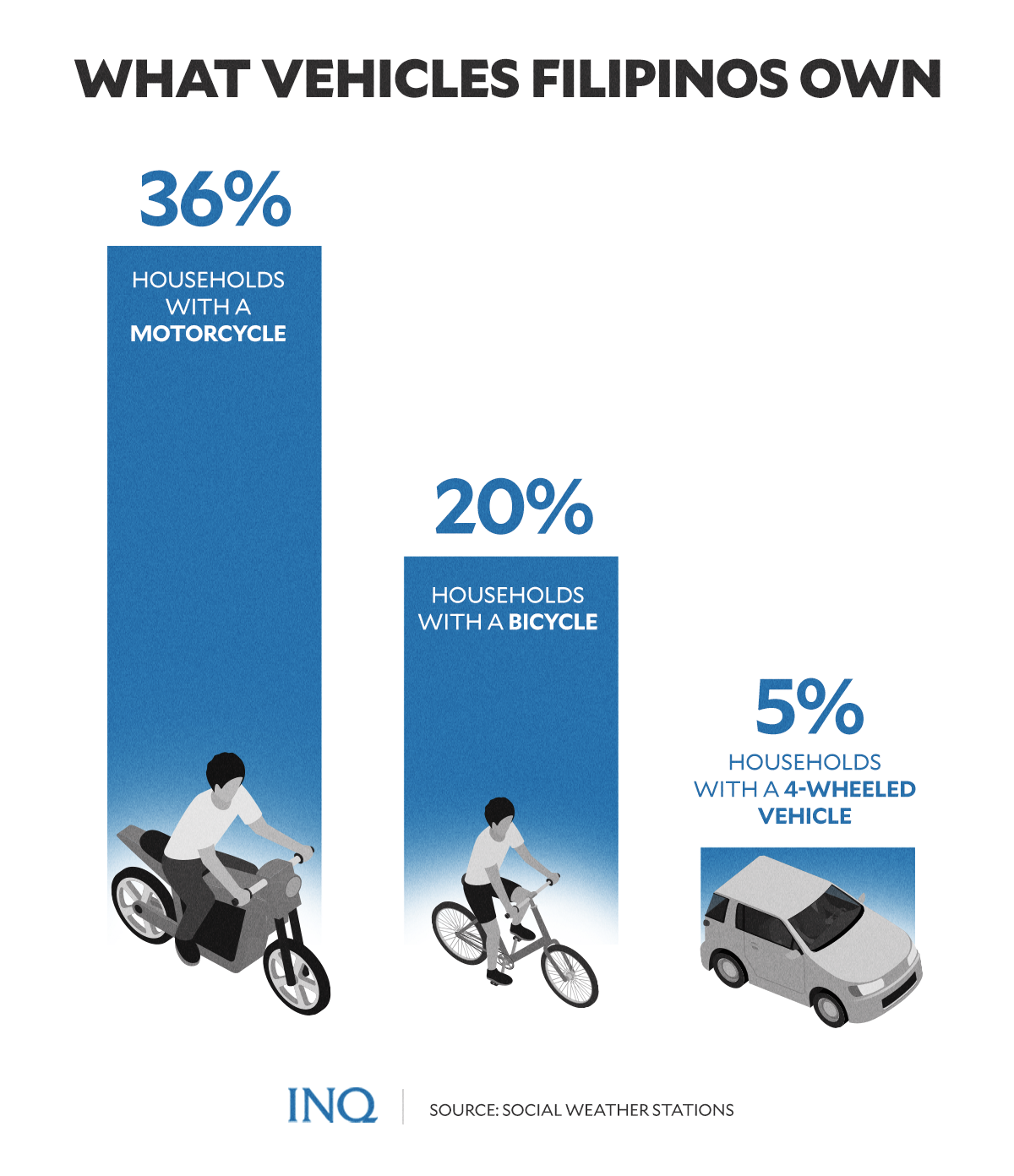 Sarmiento said he was hoping that this will be considered by the Senate as soon as possible. “If ever there are concerns, we could go for a bicameral conference committee,” he said.