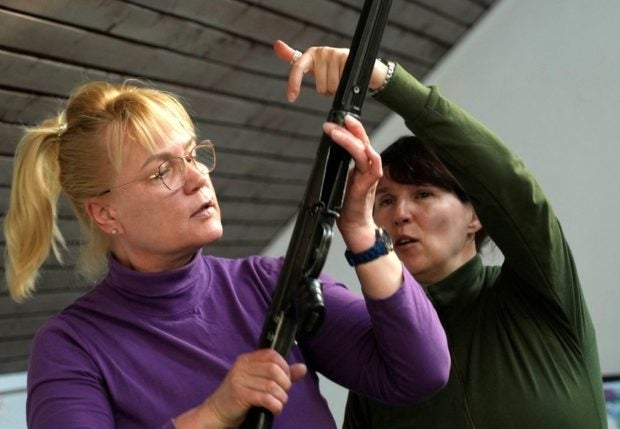 PADISE, Estonia — Early on a Sunday morning fifteen women in rural Estonia listen to an instructor explain the inner workings of rifles and bullets, after spending a freezing night in self-built tents.

The women, aged from 20 to 60, are new recruits in the Women’s Voluntary Defense Organisation, part of Estonia’s state-run paramilitary defense. Five hundred new applicants joined since the fighting in Ukraine began, expanding the force to 3,200 members.

“If I’m needed to actually fight, I will fight, as ridiculous as it sounds in 2022,” said woman doing the training, 41-year-old Kristel Eriks who is a travel agent living in Norway.

The Baltic states of Estonia, Latvia and Lithuania, once ruled from Moscow but members of Nato and the European Union since 2004, have called on Nato to urgently reinforce the region after Russia invaded Ukraine.

In contrast to Ukraine, the Baltic states enjoy the mutual protection of the Nato Treaty, which states that all members will help them if they are attacked.

Estonian Prime Minister Kaja Kalas said on Tuesday her country feels no direct military threat, but the women at the training were not so sure.

A few miles from Amari airbase, where Nato allies’ planes are deployed to patrol the skies of Baltic states, the introductory training did not include shooting with the guns, but the women learned how to apply camouflage on their faces, navigate in the woods and communicate via radios.

“Because of the situation in Ukraine, I want to be ready in any crisis situation,” said Merle Vimb, 38, on maternity leave for her second child. “I am mostly alone with my children, and I must be ready to cope alone.”

After seeing an advert on Facebook, she joined up in March to learn first aid and military skills.

“Most of us in the Baltics are living in a frightening situation. Because it’s not normal, we must prepare. I cannot just sit and wait and see what happens. If there’s a crisis, you no longer have a possibility to search for information,” said Vimb.

Kremlin: Russia would only use nuclear weapons if its existence were threatened

Ukraine says 300,000 people are running out of food in occupied Kherson