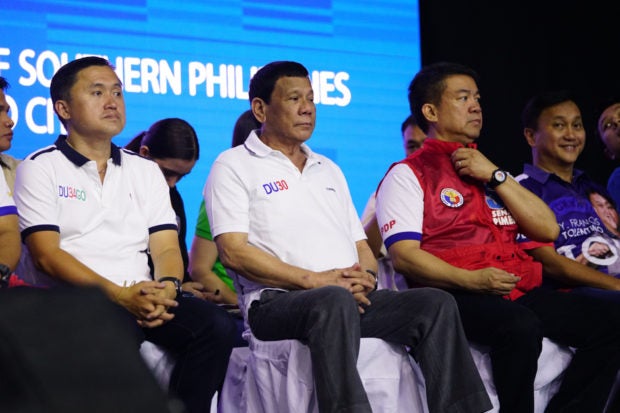 MANILA, Philippines — Senator Aquilino “Koko” Pimentel III, son of a PDP-Laban co-founder, said there will be a “cleansing” of the political party after the May 9 polls even if the group may possibly be reduced to a “very small number.”

“After this election, I promised my members who are still with me now in PDP-Laban, together with Sen. Manny Pacquiao, with his help, there will be a cleansing of the PDP-Laban,” Pimentel said in an interview on Wednesday.

“If we will be reduced to a very small number, so be it. But we will have to rebuild the party. This time, looking for people, members who really believe in the five basic principles and the objective of federalism,” he added.

But Pimentel earlier slammed this move, pointing out that “a political party formed to oppose Adolf Hitler will definitely not support an Adolf Hitler Jr.”

PDP-Laban, which was created to oppose the Marcos dictatorship, was the result of a marriage between two political parties — Partido Demokratiko Pilipino (PDP) founded by the late Senate President Aquilino “Nene” Pimentel Jr., and Lakas ng Bayan (Laban) established by the then imprisoned Sen. Benigno “Ninoy” Aquino Jr. in the late 1970s. PDP-Laban was inaugurated as a national party in 1982.

Forty years later, the PDP-Laban is divided into two factions, one led by Cusi and another led by Pimentel and presidential candidate Senator Manny Pacquiao.

Pimentel is the chairman of Pacquiao’s faction, while Cusi serves as the president of the other PDP-Laban wing.

Cusi and other members of his faction joined the PDP-Laban in 2016, the year President Rodrigo Duterte won the presidency.

“This has also happened before. A mistake was repeated but it’s very difficult in reality. In good faith, you assume that they really want to pursue the five basic principles, the objective of federalism because that is what they say. And you also believe in giving people second chances. They come from another which once upon a time, they oppose you, they want to join you now. So in good faith everything was done. But we learn our lessons,” Pimentel went on.

Pimentel then raised the need for a law against the practice of political turncoatism.

“Actually when this happened… one thought which came into my mind is probably there should be a law against turncoatism. But you know, I hope that joining a party should really be out of agreement with the party principles,” he said.

“Because if we really have a law against turncoatism but if you join just to use the party, somehow there will still be more breach, violations of the law than compliance,” he added.