Ukraine’s Zelensky says everything on table if Putin meets 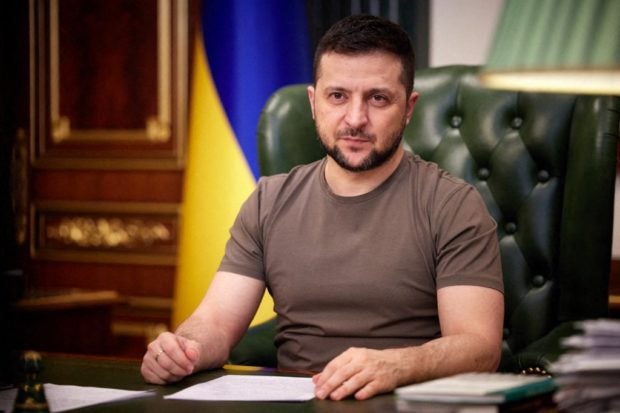 KYIV — Ukrainian leader Volodymr Zelensky said all issues would be on the table if Russia’s Vladimir Putin agreed to direct talks to end the war, including contested Crimea and Donbas, but he warned his country would be “destroyed” before it surrenders.

On the ground, there was no let-up in the violence, with Kyiv under a new 35-hour curfew after Russian strikes reduced a Kyiv shopping mall to rubble, and the Pentagon saying Moscow was stepping up air and sea operations.

President Joe Biden meanwhile warned that Putin was considering using chemical and biological weapons in Ukraine as he held talks with European leaders on what he called Moscow’s increasingly “brutal tactics”.

Nearly a month into the conflict, there has been little progress in talks between the two sides, and Zelensky has repeatedly urged direct discussions with his Russian counterpart.

He insisted again on Monday that a meeting with Putin “in any format” was needed to end the war.

“If I have this opportunity and Russia has the desire, we would go through all the questions,” he told Ukrainian journalists in an interview published by media outlet Suspilne.

“Would we solve them all? No. But there is chance, that we partially could — at least to stop the war,” he added.

Zelensky said he was even willing to discuss Russian-occupied Crimea and the breakaway Russian regions in Donbas, though he insisted he still believes they must be returned to Ukraine.

“At the first meeting with the president of Russia, I am ready to raise these issues,” he said, adding that any agreement involving “historic” changes would be put to a national referendum.

“This is a very difficult story for everyone. Crimea and Donbas… And to find a way out, we need to take this first step, which I spoke about: security guarantees, the end of the war,” he added.

He repeated his assertion that Ukraine “already understood” it could not join NATO but he added that his countrymen would not simply “hand over” the capital, the eastern city of Kharkiv, or the heavily bombarded and besieged southern port of Mariupol.

“Ukraine cannot fulfil Russian ultimatums,” he said. “We should be destroyed first.”

“It’s the biggest bomb to have hit the city until now,” said 30-year-old Dima Stepanienko, who found himself flung to “the foot of his bed” by the explosion.

An Orthodox priest walking through the wreckage whispered prayers while cursing “Russian terrorists”.

Russia claimed the mall was being used to store rocket systems and ammunition.

Moscow has stepped up its military activity, flying 300 sorties in the past 24 hours, in a “desperate” bid to turn the tide against the Ukrainian resistance, a senior US defence official said.

Biden meanwhile said Putin was considering using chemical and biological weapons, pledging a “severe” Western response if it did so.

“They are also suggesting that Ukraine has biological and chemical weapons in Ukraine. That’s a clear sign he’s considering using both of those,” Biden said, without offering additional evidence.

Putin’s troops have already been accused of causing a humanitarian catastrophe in Mariupol, where some 350,000 people are trapped without water and electricity.

The city has been relentlessly assaulted, with more than 2,000 people killed, according to local officials, in what European Union foreign policy chief Josep Borrell described as a “massive war crime”.

Russia had given Mariupol until 5:00 am on Monday to surrender, but Kyiv rejected the ultimatum and said the city’s resistance was bolstering the defence of all of Ukraine.

Mariupol is a pivotal target in Putin’s war — providing a land bridge between Russian forces in Crimea to the southwest and Russian-controlled territory to the north and east.

But even in areas Russia has captured, resistance has continued, with Ukraine’s leaders on Tuesday accusing Russian troops of firing on unarmed protesters in the occupied southern city of Kherson

A series of videos posted on social media and the messaging app Telegram showed citizens gathering in Kherson’s “Freedom Square” protesting against Russia’s recent seizure of the city.

Russian soldiers could be seen firing into the air, and video footage showing a bleeding elderly man being carried away, though local officials said there were no fatalities.

Away from the frontlines, diplomatic maneuvering will continue this week with Biden flying to Europe for talks with G7, EU and Nato leaders.

Western countries and allies are expected to shore up their united front, though possible additional steps to pressure Russia remain unclear.

Moscow has warned relations with Washington are “on the verge of rupture,” after Biden branded Putin a “war criminal”.

And it said it was abandoning talks with Japan, aimed at reaching a post-World War II peace treaty, citing Tokyo’s “openly hostile position.”

Zelensky has urged Europe to significantly dial up pressure on Moscow, saying the continent must cease all trade with Russia, but Germany has pushed back on a call for an EU embargo on Russian oil and gas.

At the Kremlin, spokesman Dmitry Peskov warned such an embargo would “have a very serious impact on the world energy market,” where oil prices are already sky-high.

With the war edging closer to a stalemate, Zelensky has also appealed to China, urging it to “play an important role in” ending the conflict.

The war has displaced around 10 million Ukrainians, with around a third becoming refugees, according to the UN, and sparked fears of famine elsewhere because Russia and Ukraine are both major agricultural exporters.