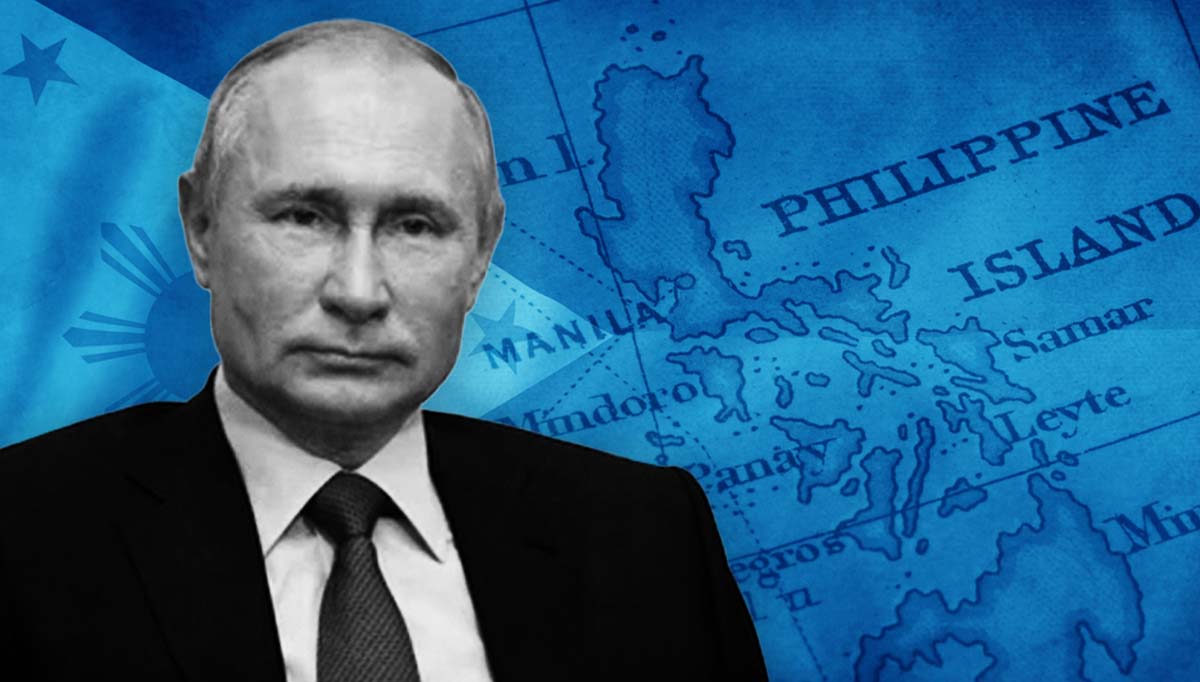 MANILA, Philippines—As the destruction of Ukraine by Vladimir Putin’s military unfolds before the eyes of millions, the United States went all out in its support for the former Soviet republic, drawing reactions from world leaders, including Philippine President Rodrigo Duterte.

On March 4, Duterte said he believed that the Philippines has to remain neutral but “in the end,” may have to choose sides between Russia and Ukraine.

“For me, we should stay neutral. But reality tells me that in the end, we’ll just have to select which side we will be,” Duterte said.

READ: Duterte on Russia-Ukraine conflict: We stay neutral until time to choose sides

While Duterte has yet to be categorical on which side the Philippine government will be, a more recent statement by Manila’s top diplomat to Washington seemed to unveil plans to support one of the countries involved in the war.

The country, however, was neither Ukraine nor Russia. Instead, it was the United States, a longstanding ally of the Philippines and now an important supporter of Ukraine.

‘If push comes to shove’

According to Philippine Ambassador to the United States Jose Romualdez, Duterte said the Philippine government may open its facilities to the US if Putin’s quest to destroy Ukraine spilled over to Asia. 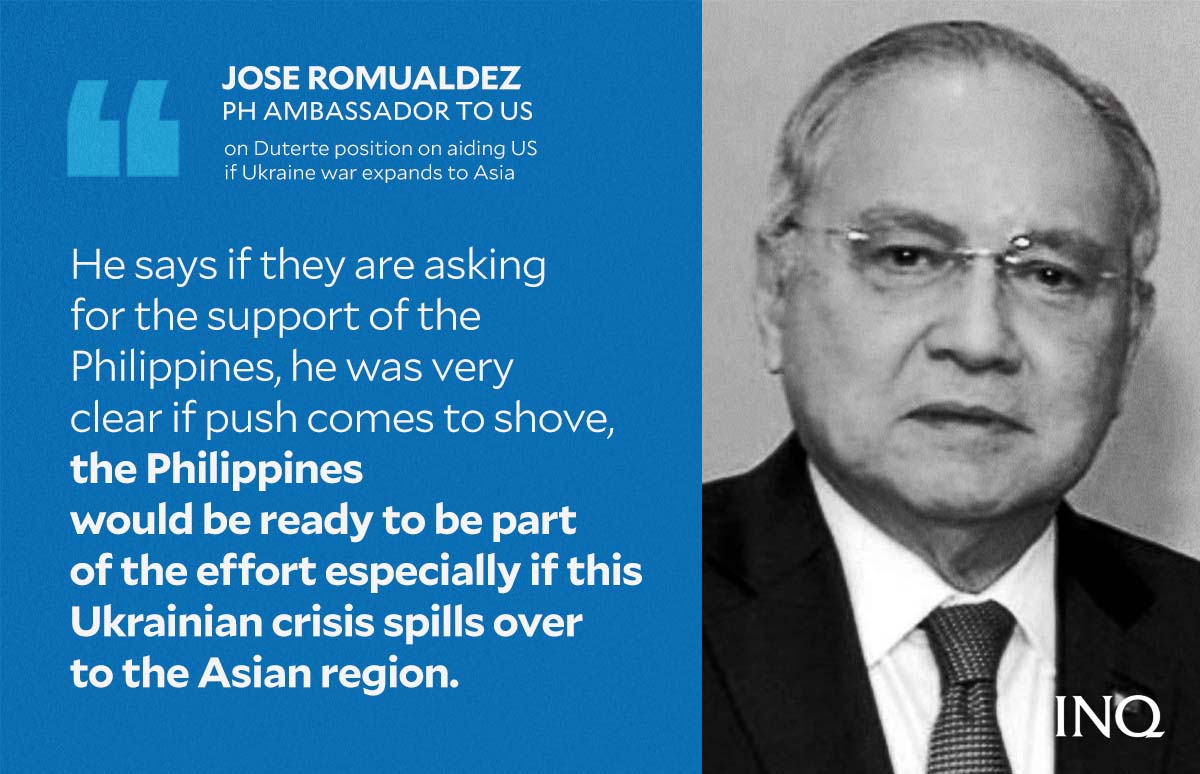 “He [Duterte] says he might not be able to go [to the US] but to give them the assurance that if ever it is needed, the Philippines is ready to offer whatever facilities, or whatever things that the United States will need, being a major, our number one ally, in using the facilities in the Philippines, without any restrictions,” said Romualdez.

“He says if they are asking for the support of the Philippines, he was very clear if push comes to shove, the Philippines would be ready to be part of the effort especially if this Ukrainian crisis spills over to the Asian region,” he added.

According to Romualdez, Duterte’s assurance is that the Philippines will honor its Mutual Defense Treaty (MDT) with the United States if the situation warranted it.

The MDT, signed between the two nations in 1951, calls for both nations to come to each other’s defense in case of an armed attack.

“I’m pretty sure that the President meant this to be an emergency situation where—let’s pray that it doesn’t happen—but if this spreads out into our part, the Asian region, for some reason or another, the President obviously sees the need for us to make a choice and our choices, obviously, since we have an MDT with the United States, we have this special relationship, our military alliance,” Romualdez said.

READ: PH ready to open facilities to US if Russia-Ukraine conflict ‘spills over’ to Asia – envoy

Duterte, according to Romualdez, has mentioned that the Philippines would be “ready to open its doors” and allow the US to use facilities that might be needed if an “emergency situation” breaks out.

In a more recent statement, Duterte said if Putin launched nuclear weapons to achieve his goal of destroying Ukraine, China, a Russian ally, could start the invasion of the Philippines. 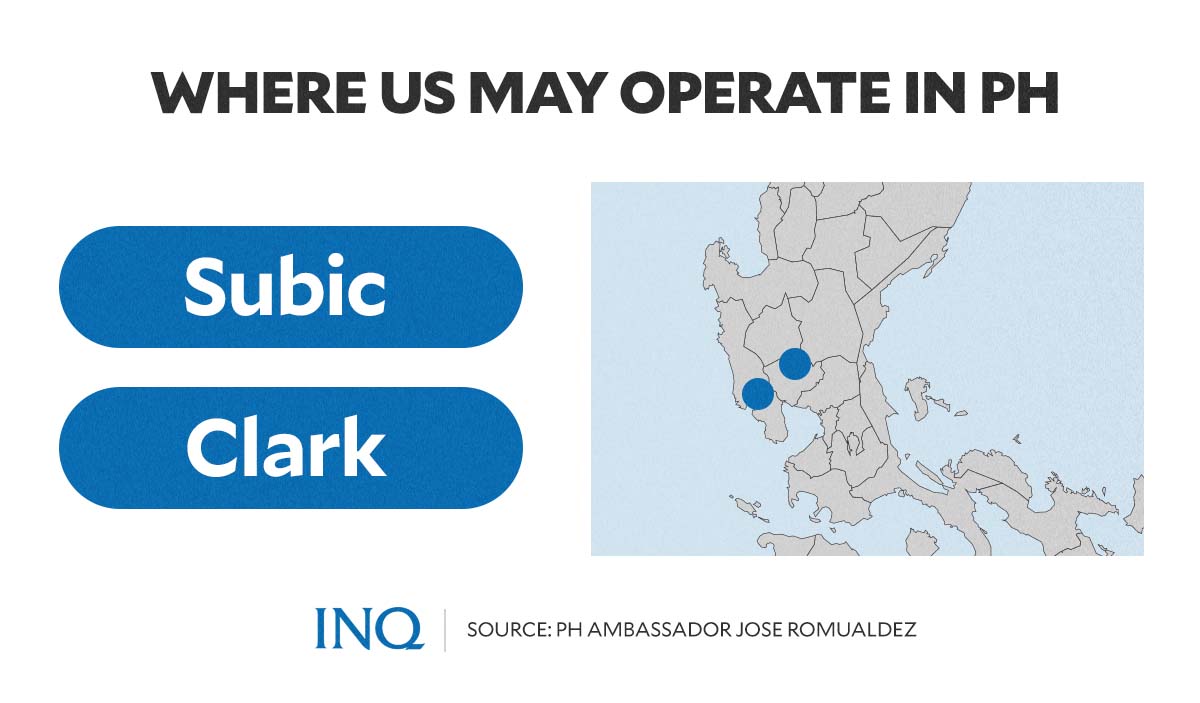 According to Romualdez, some of the facilities which the Philippines might allow to be used by US forces could include the former American air and naval bases in Subic, Zambales and Clark in Pampanga.

“He said that he is allowing the use of facilities, which I assume would be the use of Clark for instance, for some of the aircraft that the United States may need,” said Romualdez.

“And perhaps Subic. We have a repair facility there that is going to be used not only by the United States but by other countries, Japan, Australia, and other countries. It’s a commercial business. Hanjin is now ready to be opened again for use by many of the ships, both private and military ships or Navy ships that may want to use it for repair or for other activities,” he added.

The United States maintained a naval base in Subic until 1991 when the Philippine Senate refused to renew a military bases agreement between the two countries. The Philippine decision also led to the dismantling of a US airbase at Clark, Pampanga province.

Subic and Clark have since been redeveloped into free ports, bustling economic hubs that have withstood the pandemic.

However, Romualdez clarified that while the Philippine government has expressed its willingness to lend its facilities to the US, there is no need to craft a new treaty—which would allow the US to establish military bases in the country.

“The bases are no longer there. In other words, if the US will need our facilities, it will only be temporary,” he said in an interview over radio station dzBB last March 14.

“Most likely it’s only for their supplies or an area in Subic where they can repair their ships,” he added.

Duterte’s statement expressing possible support to the US amid Putin’s destruction of Ukraine, however, was met with mixed reactions.

In a statement, Sen. Leila de Lima slammed what she described as “an irresponsible and premature statement” on the Philippines’ supposed role should Putin’s destruction of Ukraine spill over to Asia.

According to De Lima, such a statement “engenders an escalation in the language of the conflict” and such is not yet being discussed by leaders of Europe and the US.

“The Philippine government should not be issuing statements that are counter-intuitive to conflict resolution and which almost amount to sabre-rattling. The call of NATO and the US is for peace and the withdrawal of Russian forces,” the senator said.

“For the Philippines to be talking about its role in the event of the expansion of the conflict, while NATO is even steadfast in its own outright refusal to put NATO boots on Ukrainian soil, only reflects Duterte’s ‘utak pulbura’ world-view,” she added, using a Filipino term for war freak.

De Lima, a staunch critic of Duterte, also said that by issuing the statement, Duterte might be putting the US on the spotlight if indeed the US is also projecting a worldwide conflict arising from Putin’s aggression.

“Of course, the US is not expected to respond to Duterte’s invitation, premature and irresponsible as it is in light of the critical nature of the US’s relations with Russia as of present,” said De Lima.

“Southeast Asia as of now is still very remote from the conflict, other than feeling the war’s economic repercussions,” she continued.

On the other hand, Sen. Panfilo Lacson said he believed that the Philippines must be “fully prepared” for a possible spillover of Putin’s aggression to Asia.

Lacson said the Philippines must walk the talk, given that the Philippines has already supported the United Nations General Assembly resolution condemning Russia’s invasion of Ukraine.

“We signed the UN General Assembly resolution condemning the invasion of Ukraine by Russia. So we should walk the talk. If our facilities are needed whether it be on land, sea or air, that is but proper,” Lacson said in an interview on radio station dzRH last week.

“It is better to be prepared than be surprised,” the senator said, adding that the Philippines “must be consistent—we must maintain close ties with allies who will help ensure our security from external threats.”

READ: Be ready for scenarios arising from Russia-Ukraine crisis – Lacson

READ: ‘Like a ricocheting bullet’: PH braces for impact of Putin war on Ukraine

However, early on, Putin has already made a clear and chilling warning against countries that will provide aid and support to Ukraine as his forces push forward to the former Soviet republic as part of what the dictator described as a “special military operation.”

“Whoever tries to hinder us, or threaten our country or our people, should know that Russia’s response will be immediate and will lead you to consequences that you have never faced in your history,” Putin said in a televised broadcast last Feb. 24. 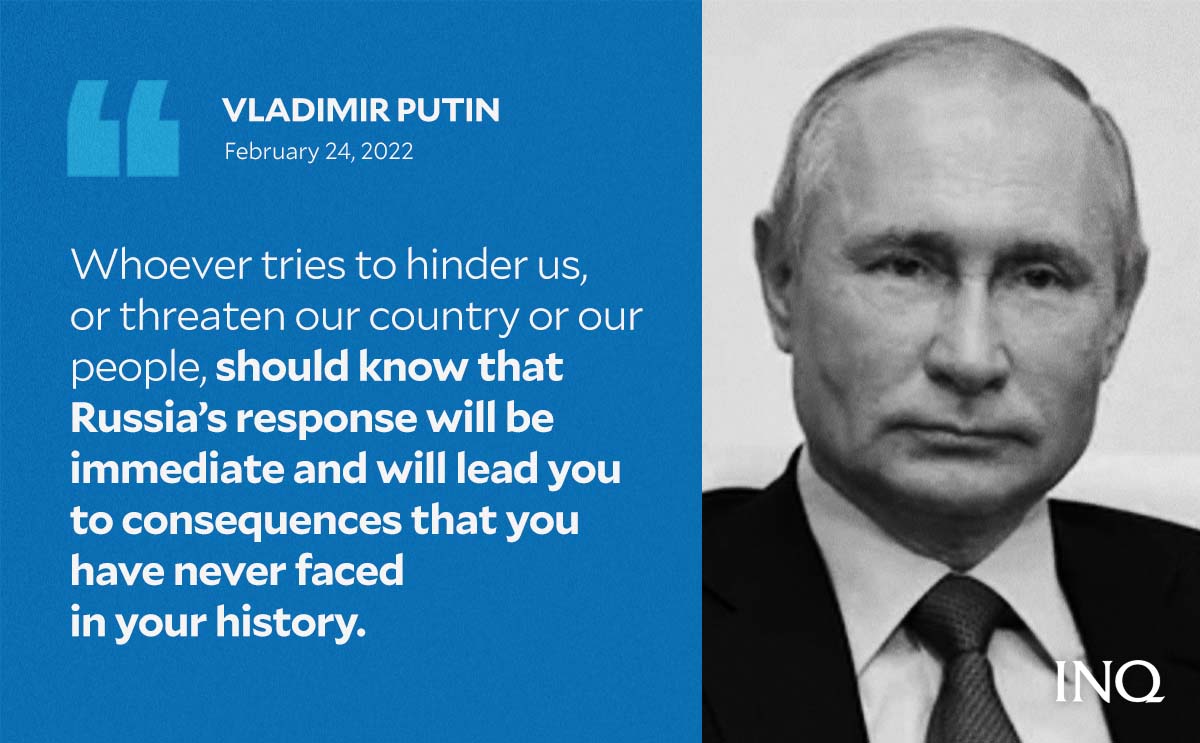 “We are ready for any turn of events. All necessary decisions in this regard have been made. I hope that I will be heard,” he added.

Despite Putin’s warning, however, US President Joe Biden and US allies imposed a series of swift and sweeping sanctions against Putin and Russia for the invasion of Ukraine. These tough penalties by the US, as well as its Western allies, aimed to impose extreme economic costs on Russia and its people. 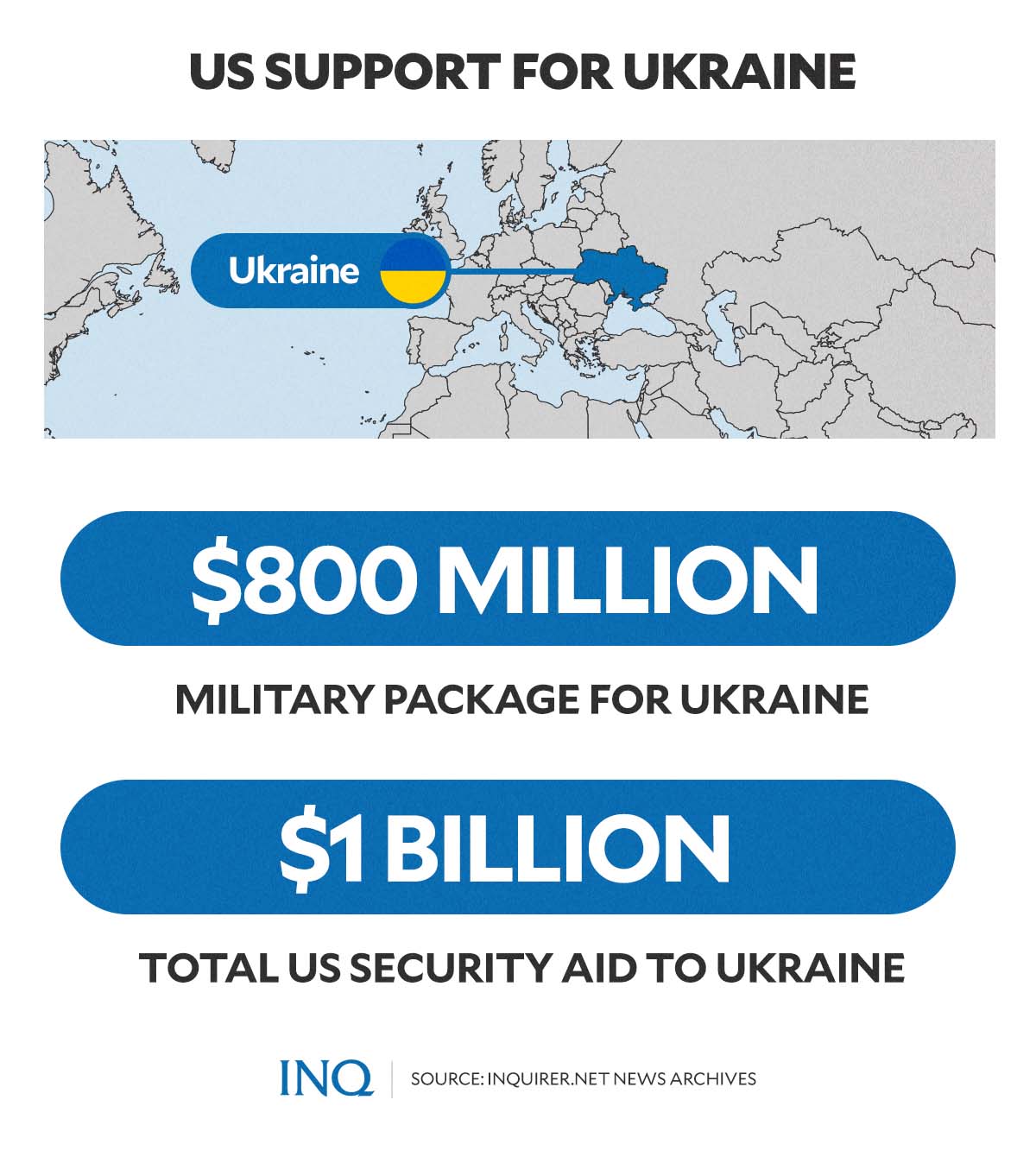 The US has also been sending military support to Ukraine since the attacks started last Feb. 24, which included so-called lethal aid or weapons.

Last March 17, Biden approved an additional P41.9B ($800M) for its military aid package to Ukraine, bringing the cost of total US security aid to Ukraine since the Putin invasion began to P52B ($1B). 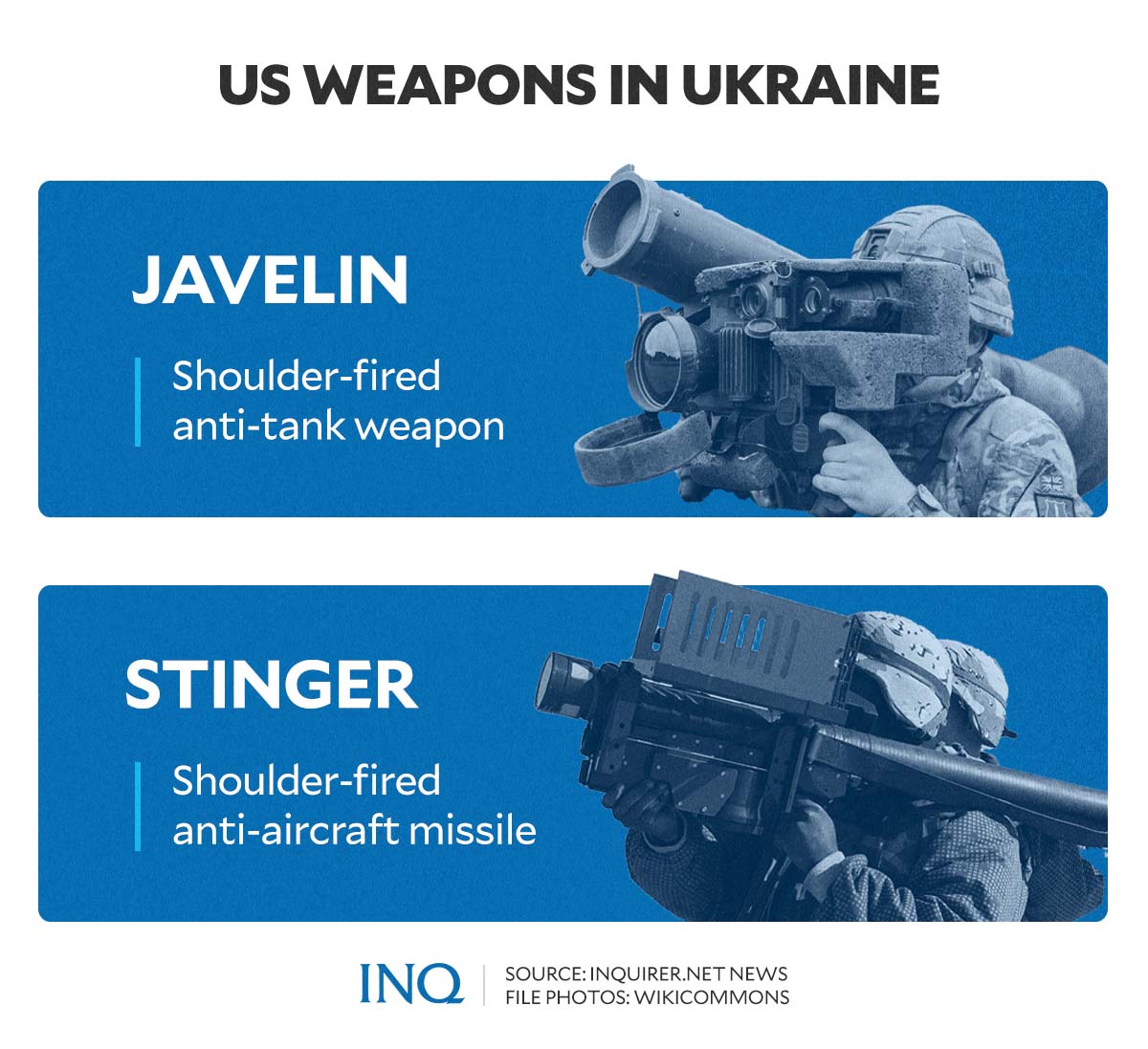 A few days earlier, on March 11, the US Senate approved the P712B ($13.6B) emergency military and humanitarian aid package for Ukraine and its European allies—P340B will be given to the Pentagon while P350B will go to care for refugees.

So far, Russia has only produced and approved a list of countries and territories that have conducted “unfriendly actions” against Russia and its citizens over Putin’s bid to destroy Ukraine.

Tension continued to escalate between the Russian government and the US as concerns were expressed over Chinese military aid to Putin, a close ally of Chinese President Xi Jinping.