Who are the Rohingya? | Inquirer News

Who are the Rohingya? 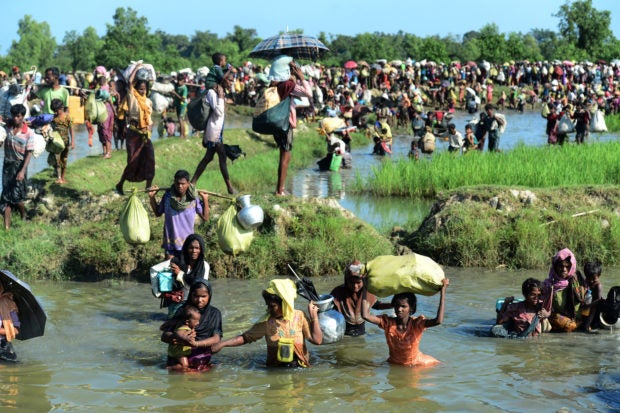 In this file photo taken on October 16, 2017, Rohingya refugees walk through a shallow canal after crossing the Naf River as they flee violence in Myanmar to reach Bangladesh in Palongkhali near Ukhia. AFP

BANGKOK — The United States will Monday officially declare that Myanmar military violence against Rohingya Muslims that sent more than 700,000 fleeing amounted to genocide and crimes against humanity.

It is the latest chapter in the long and tumultuous history of the group, the world’s largest stateless population.

Roughly a million Rohingya lived in Rakhine state, in the west of Buddhist-majority Myanmar, before many of them were forced from the restive region during a 2017 military crackdown.

But the questions over their origins and identity are hotly disputed, highly emotive and behind much of the recent unrest.

By some accounts, the Rohingya are descendants of Arab, Turkish or Mongol traders and soldiers who in the 15th century migrated to Rakhine state, previously called the Kingdom of Arakan.

Other historians say they migrated from Bangladesh in several waves, a widely held view among many in Myanmar.

For centuries the small Muslim minority lived peacefully alongside Buddhists in the independent kingdom, with some even advising Buddhist royals, according to historians.

Upheaval ensued from the late 18th century as the kingdom was conquered by the Burmese and later by the British.

As part of their divide-and-rule policy, the British favored Muslims, recruiting them as soldiers during World War II and pitting them against Buddhists aligned with the Japanese as the conflict raged on Burmese soil.

While their status was fortified in 1947 when a new constitution was drafted — giving them full legal and voting rights — it was a brief reprieve.

A military coup in 1962 ushered in a new era of repression, and a 1982 law stripped them of their recognised ethnic minority group status.

Most lived in Rakhine — but were denied citizenship and harassed by movement and work restrictions.

Hundreds of thousands fled to Bangladesh in successive waves of violence in 1978 and 1991-2.

Using a dialect similar to that spoken in Chittagong in southeast Bangladesh, the Rohingya are loathed by many in Myanmar, who see them as illegal immigrants and call them “Bengali”.

After the junta was dissolved in 2011, the country saw a rise in Buddhist extremism which further sidelined the Rohingya and marked the beginning of the latest era of tensions.

Sectarian violence between the Sunni Muslim Rohingya and local Buddhist communities broke out in 2012, leaving more than 100 dead and the state segregated along religious lines.

Despite decades of persecution, the Rohingya had largely eschewed violence.

But in 2016 a small and previously unknown militant group — the Arakan Rohingya Salvation Army (ARSA) — staged a series of well-coordinated and deadly attacks on security forces.

An estimated 391,000 Rohingya fled to Bangladesh in 2017, according to the United Nations, bringing with them harrowing stories of murder, rape and arson.

Once internationally lauded for her decades of resistance to the junta, Aung San Suu Kyi’s administration later dismissed concerns about rights abuses over the Rohingya.

Suu Kyi defended the army’s conduct and in 2019 travelled to The Hague to rebut charges of genocide at the UN’s top court.

In February 2021 she was re-imprisoned by the very generals she had defended as the country endured yet another coup.

The current junta claims the UN court has no jurisdiction and has asked for the case to be dismissed.

Recent statistics suggest that as many as 850,000 Rohingya now languish in Bangladeshi camps, with approximately 600,000 in Rakhine state.