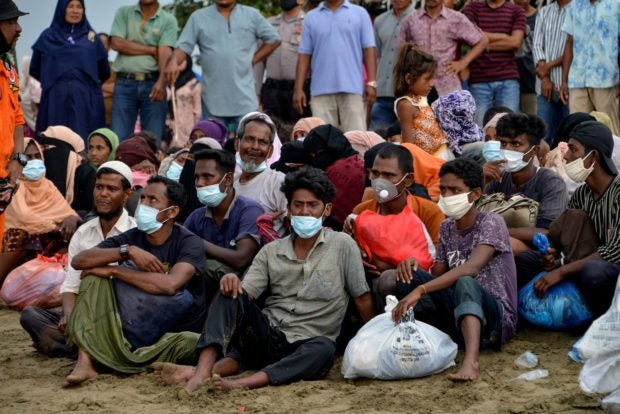 Evacuated Rohingya people from Myanmar sit on the shorelines of Lancok village, in Indonesia’s North Aceh Regency on June 25, 2020. – Nearly 100 Rohingya from Myanmar, including 30 children, have been rescued from a rickety wooden boat off the coast of Indonesia’s Sumatra island, a maritime official said. (Photo by CHAIDEER MAHYUDDIN / AFP)

DHAKA — “We are the same human being like you and need the same basic rights which you enjoy. Please don’t hate us. We don’t want to be a burden. Allow us to study and work, and stand by us. We will surely return home.”

This was the ardent appeal of Sharifah Shakirah, who fled to Malaysia from Buthidaung township in Myanmar at the age of six. Sharifah was joined by four other Rohingya youth at an eSymposium on June 9 to share their experiences of the Covid-19 situation in their respective countries of asylum.

The Covid-19 pandemic has wreaked havoc on the lives and livelihoods of people all over the world. It has disproportionately harmed the marginalized—refugees, asylum seekers and the stateless people. The Rohingya survivors of Myanmar’s genocide are no exception.

Rohingyas living in Burma are being subjected to state sponsored stigmatization after the outbreak of Covid-19. Although so far one Rohingya and two Rakhines have been infected, the local authorities and the media are engaged in a hate campaign against the Rohingya, claiming “Bengalis”, the slur word for Rohingya, have entered Myanmar illegally and have brought coronavirus with them. This has resulted in a sharp increase in hate speech against the Rohingya on Burmese social media.

The conditions of the Rohingyas in the internally displaced persons (IDP) camps in Burma are particularly dire. With a plethora of discriminatory restrictions, famine like conditions prevail in northern Rakhine. In violation of the explicit order of the International Court of Justice to protect the Rohingya, the Burmese government continues to pursue its genocidal policies against them, causing internal displacement of thousands. Many more are forced to flee to Bangladesh and the other countries of south-east Asia.

There are more than one million Rohingya in Bangladesh, 300,000 in Saudi Arabia, 150,000 in Malaysia, 30,000 in India and tens of thousands more scattered across the world. The refugee camps have very rudimentary facilities and are almost never well resourced. The lockdown has increased the suffering of the residents as problems of water supply, shelter repair and food supply appear, and health care services dwindle. Most Rohingyas in informal camps and shanties in urban settings live in crowded conditions, with poor water and sanitation facilities. All these make them particularly vulnerable to Covid-19.

A large number of Rohingyas have to fend for themselves and work as wage laborers in the informal sector. The lockdowns and the overall economic slowdown have robbed them of livelihood opportunities and pushed them into an abyss of malnutrition and hunger. The absence of any social protection mechanism has further exposed them to coronavirus infection and other diseases.

Hundreds of Rohingya are passing a dreadful time in detention camps, many for years. Bereft of any contact with their loved ones, most cannot secure legal support. Scores of cases exist in which Rohingyas who served out their sentences still remain incarcerated, as authorities deny their release since Burma is not willing to take them back.

Curtailment of physical movement even within the refugee communities, mistreatment, threats of reduction of food or forcible relocation to uninhabited natural disaster prone sites, and sustained policies of internet ban in some states, have been of major concern to the members of the Rohingya community.

Refugees and asylum-seeking Rohingyas are being subjected to various forms of exploitation. Those who can still find work may have to work longer hours with reduced wages, and face degrading treatment. The condition of women and children is distressing. The presence of men at home for most of the day, compounded with additional stresses and strains, makes women vulnerable to domestic violence. The prolonged closure of counseling and legal aid clinics due to Covid-19 has further limited their ability to seek support.

Hate crimes against the Rohingyas in different countries have been widely reported. Often such stigmatization, hate crime and xenophobia are state condoned and echo the genocidal ideology of Myanmar, the principal perpetrator of genocide.

All these conditions are propitious for human traffickers. Anecdotal evidence indicates that, taking advantage of the worsening condition of the Rohingyas in Covid-19 situation, trafficking and human smuggling syndicates have bolstered their operations to aggressively recruit Rohingyas in distress, both in Arakan and in countries of asylum. Currently, the region is experiencing the plight of the Rohingyas drifting on traffickers’ boats with little food, drinking water or energy supplies in the Andaman Sea and the South China Sea. Torture, rape and degrading treatment are rife in the boats. These are stark examples of the Rohingyas’ predicament, who have been subjected to both border closures by states and extortion by the traffickers. One panelist noted “in Myanmar, Rohingyas have no future and lead a sub-human life. They are forced to take help of traffickers to escape the atrocious conditions at home”. Another made a fervent plea for the world to understand that “being refugees is not our choice; circumstances compel us to move to other lands”.

The panelists regretted that most states and international actors continue to pander to the genocidal Burmese state and refuse to acknowledge Rohingyas “as Rohingyas”, refrain from calling mass atrocities and crimes against the Rohingya “as genocide” and decline to term people fleeing genocide by crossing borders “as refugees”. Needless to say, these acts of omission are nothing less than condoning genocide.

The Rohingya community is disappointed that they are left out of the decision making processes that involve their life and their future. Projects for refugees are designed by national and international bureaucrats, without any input of the community, nor is there any independent assessment about their efficacy. The publicly funded “big organizations do not consult us. They sign secret agreements without our knowledge and they make covert plans about our future with the country that committed genocide against us”, noted the Coordinator of Free Rohingya Coalition (FRC).

The panelists felt strongly about the efforts to securitize the Rohingya issue by a vested quarter. The burgeoning discourse, shaped by the manipulative Burmese state in connivance of pliant global media and some powerful states that have important stakes in Burma, of presenting the Rohingya as a security threat, needs to be countered by facts (and not perception), they argued. Such flawed approaches fail to acknowledge the reality—that Rohingyas are survivors of genocide.

The disenchantment of the Rohingya panelists about the “great democracies who champion freedom around the globe” was palpable. Thus far, the sternest action taken has been “banning a few members of the regime from vacationing in their countries”. “This is not only travesty of justice; it is an indictment of the vested economic and political interests that these countries are mired in in Burma”, the FRC Coordinator observed.

The panelists argued that if the Rohingya are expected to rebuild their communities after their eventual return home, then all Rohingya children and youth ought to be given the opportunity to develop their human potentials by arranging their access to appropriate education and skill development. There is an urgent need by all quarters (host states, donor agencies, intergovernmental actors and NGOs) to recognize the community’s agency and create opportunities for self-empowerment and entrepreneurship. This will reduce the pressure on the host countries and international actors, as well as prepare the community members for their eventual reintegration in Arakan after their return to Myanmar.

The Rohingya members acknowledged the adverse impact of the refugee flow on the host communities and economic and environmental costs that countries like Bangladesh have to bear. They felt Burma should be made to pay appropriate reparation to the countries that are adversely affected by its actions, contributing to the refugee flow and incurring huge costs: social, economic and environmental.

Highlighting the ignominy that refugees and asylum seekers often have to endure, one panelist reminded the audience that they too once had homes, went to school and owned property. She said “we are not objects of charity, what we need is support. Please understand we are human beings and like you, we have dreams and aspirations”. The message was loud and clear. What these youth want is to thrive as human beings, to realize their innate potentials, not merely to survive.

Almost at the end of the conversation, a panelist posed a question to the audience—”what would you do if your own country denied you your rightful claim to citizenship and documentation and forcibly expelled you from your ancestral land?”

Perhaps the time has come for us to place ourselves in Rohingyas’ shoes and view the world from their perspective.