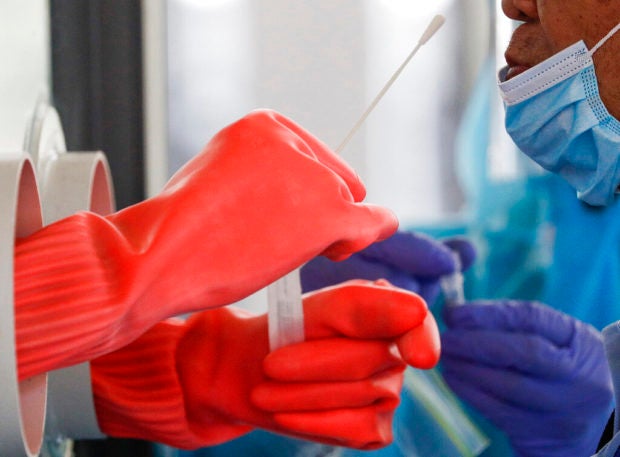 A health worker takes a nasal swab sample from a resident as they conduct mass testing for COVID-19 in Manila, Philippines on Friday, May 8, 2020. The whole of metropolitan Manila is still under enhanced community quarantine to help prevent the spread of the new coronavirus. (AP Photo/Aaron Favila)

In a press conference, deputy chief implementer of the government’s COVID-19 response Vince Dizon attributed this to the increasing number of COVID-19 laboratories in the country.

(Remember we only had one laboratory in February which is the RITM. Now we have 85 laboratories nationwide.)

Dizon earlier set the goal of conducting one million tests by July after the government received a million COVID-19 testing kits.

Dizon also attributed the increase of tests conducted to Metro Manila local government units which ramped up testing in their respective jurisdictions.

Read Next
Pagasa: TD Carina continues to move away from Batanes
EDITORS' PICK
Climate Change Commission and Nestlé PH to discover sustainability-focused solutions
SC asked to compel gov’t action vs plastic pollution
PH study shows 1 in 4 COVID patients at risk for stroke
Legarda emphasizes role of ICC/IPs in nation building this IP month
Print media group seeks tax breaks
Work-From-Home is here to stay and requires reliable logistics
MOST READ
Drivers now required to take driver’s education upon license renewal – LTO
Gordon to Duterte: You? Teaching me courtesy?
Can Marcos Jr. be disqualified?
Marcos Jr’s ‘special diploma’ from Oxford: You can have it, too
Don't miss out on the latest news and information.