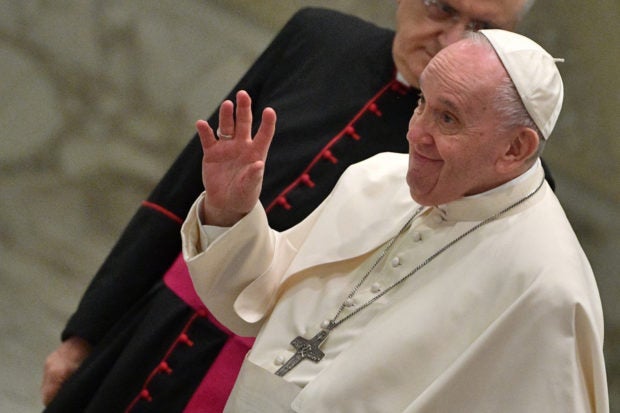 Pope Francis waves during an audience for the Choirs of Antoniano, on March 19, 2022 at Paul-VI hall in The Vatican. AFP

VATICAN CITY — Pope Francis on Saturday followed through on a promise made ahead of his 2013 election and published a much-anticipated shake-up of the Vatican’s powerful governing body.

The new constitution, which comes into effect on June 5, restructures parts of the unruly Roman Curia, and makes increasing the world’s 1.2 billion Catholics the church’s number one priority.

Among the most significant changes are the possibility for lay and female Catholics to head up Vatican departments, and the incorporation of the pope’s sex abuse advisory commission into the Curia.

“Pope Francis has been working on a new organizational structure for the Vatican for nine years. It’s a major aspect of his legacy,” Joshua McElwee from the National Catholic Reporter said on Twitter.

Cardinals gathered for the conclave to elect a new pope in 2013 were divided between those who believed there were deep-rooted problems in the Curia and those who wanted to preserve the status quo.

Ex-pope Benedict XVI, who had just resigned, was reported to have tried and failed to clean up a body some even blamed for preventing the church from properly tackling the child sex abuse scandal.

Francis, 85, put together a group of cardinals to advise him over the years on how to reform the Curia, and has already enacted many changes as he moves to modernize the centuries-old institution.

The 54-page text entitled “Proclaiming the Gospel”, which replaces a constitution drawn up by pope John Paul II in 1988, creates a new department for evangelization, to be headed up by Francis himself.

Making himself “Chief Evangelizer” encapsulates a “tectonic shift to a more pastoral, missionary church,” David Gibson, director of the Center on Religion and Culture at Fordham University, said on Twitter.

In that vein, Francis says every baptised Christian is a missionary.

“One cannot fail to take this into account in the updating of the Curia, whose reform must provide for involvement of laymen and women, even in roles of government and responsibility,” he said.

The constitution, released on the ninth anniversary of the inauguration of Francis’ papacy, makes the pope’s charity czar, currently Polish Cardinal Konrad Krajewski, head of a department in its own right.

It also brings the Vatican’s Commission for the Protection of Minors — a papal advisory body — into the office which oversees the canonical investigations of clerical sex abuse cases.

In doing so, the pope is “effectively establishing the Vatican’s first safeguarding office”, the Tablet’s journalist Christopher Lamb said.

Cardinal Sean O’Malley, who heads the Commission, said it was a “significant move forward”, which would give institutional weight to the fight against a scourge which has plagued the church globally.

But Marie Collins, an Irish survivor of clerical abuse who served on the commission before resigning in outrage in 2017 over the church’s handling of the crisis, slammed it instead as a clear step back.

“The Commission has now officially lost even a semblance of independence,” she said on Twitter.

Year of Covid plunges Vatican deeper into the red

Filipino bishops to meet Pope Francis during 2019 pilgrimage to Rome

Religion and the rest of society