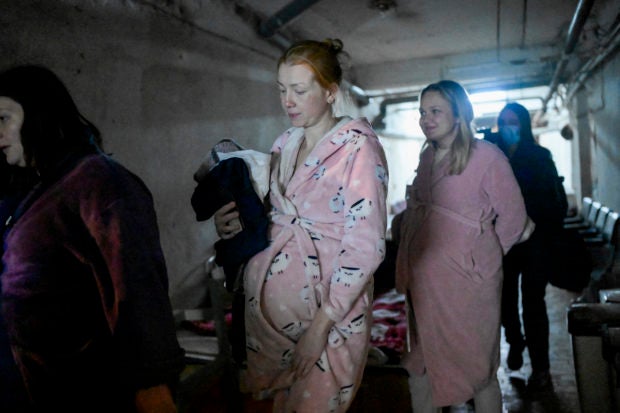 Pregnant women walk in a basement of maternity hospital as sirens warning for air raids in Mykolaiv, on March 14, 2022. AFP

KYIV — Russian air raids on Mykolaiv were taking place in quick succession Saturday, a regional official said, a day after a deadly strike on a military barracks in the southern Ukrainian city.

Vitaly Kim, head of the regional administration, said there wasn’t even enough time to raise the alarm over the raids “because by the time we announce this tornado, it’s already there”.

“The (alert) message and the bombings arrive at the same time,” he said on social media.

He gave no details about the extent of the damage or on any possible victims.

Dozens of soldiers were killed after Russian troops struck the military barracks in Mykolaiv early Friday, witnesses told AFP on Saturday, as a rescue operation was under way.

Authorities have not yet released an official death toll.

Ukrainian authorities say that Mykolaiv, which they describe as being a “shield” to the key strategic military port of Odessa, some 130 kilometers (85 miles) further west, is resisting Russian attacks and pushing back the invaders’ assaults.