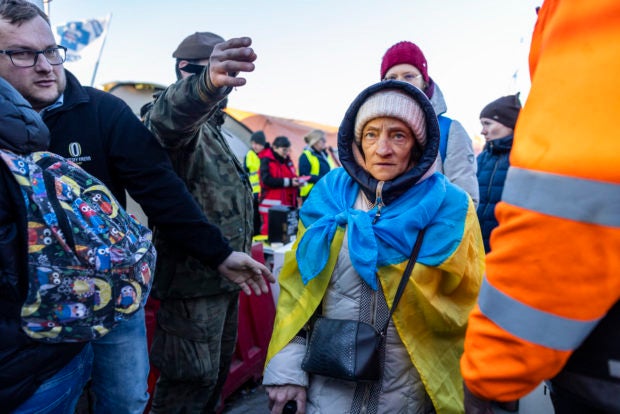 People, including an elderly woman wearing an Ukrainian flag, line up to get into the buses for further transportation at the Medyka Polish-Ukrainian border crossing on March 18, 2022. AFP

Ukraine calls on China to join the West in condemning “Russian barbarism”, after the US warned Beijing of consequences if it backed Moscow’s attack on the country.

“China can be the global security system’s important element if it makes a right decision to support the civilised countries’ coalition and condemn Russian barbarism,” presidential aide Mikhailo Podolyak wrote on Twitter.

Russia says it has used hypersonic missiles for the first time in Ukraine to destroy a weapons storage site in the west of the country.

Hypersonic missiles travel faster than the speed of sound and can maneuver mid-flight, making them hard to track and intercept.

Russia’s defense ministry says it used the technology to strike an underground arms depot in the village of Deliatyn, around 100 kilometers (60 miles) from Ukraine’s border with Romania.

Russian air raids on Mykolaiv were taking place in quick succession Saturday, Vitaly Kim, head of the regional administration, says, a day after a deadly strike on a military barracks in the southern Ukrainian city.

Dozens of soldiers are thought to have been killed after Friday’s strike on the barracks, witnesses tell AFP as rescue operations continue. An official toll has not yet been given.

Russia says its forces have broken through the defences of the besieged southern port of Mariupol and are now inside the war-torn city.

The mayor of Mariupol confirms to the BBC that Ukrainian and Russian forces are engaged in gun battles in the heart of the southern port, which has suffered relentless shelling.

In a live address to a Swiss rally, President Volodymyr Zelensky blasts firms including Nestle for carrying on business as usual with Russia “even though our children are dying” and tells the country’s banks to freeze funds belonging to the Kremlin elite.

Rescuers continue searching for people trapped in a bomb shelter buried under the wreckage of a bombed theatre in Mariupol.

Ukraine’s President Volodymyr Zelensky says 130 people have been saved but that “hundreds” are still trapped in rubble after Wednesday’s strike on the theatre, where people were sheltering from the Russian shelling.

Zelensky calls for urgent talks with Russia, saying in a Facebook video they are the “only chance for Russia to minimize the damage done with their own mistakes”.

He has been pushing for direct talks with Russian President Vladimir Putin.

Moscow claims that several rounds of negotiations have made progress on one of its key demands — that Ukraine becomes a neutral state. Kyiv, which is demanding international security guarantees, denies its position has changed.

US President Joe Biden laid out to his Chinese counterpart Xi Jinping the “consequences” of any support for Russia in its war against Ukraine, the White House says.

During their first call since the Russian invasion, lasting almost two hours, Xi said that war is “in no one’s interest”, but he showed no sign of giving in to US pressure to join Western condemnation of the invasion.

Russian forces destroy an aircraft repair plant near Lviv airport but no one is hurt, Mayor Andriy Sadovyi says on the messaging app Telegram.

The western city is just 70 kilometers (45 miles) from the border with NATO member Poland.

The UN warns that the humanitarian needs are becoming ever more urgent across eastern Ukraine, with a potentially fatal lack of food, water and medicines in besieged cities such as Mariupol and Sumy.

Russia warns that “dilapidated” mines that Ukrainians had deployed in the Black Sea against its “military operation” could drift as far as the Straits of Bosphorus and the Mediterranean Sea.

More than 3.3 million refugees have now fled Ukraine since the Russian invasion, while nearly 6.5 million are thought to be internally displaced within the country, the UN refugee agency says.

The First Lady of Ukraine, Olena Zelenska, calls on the World Council of Churches to help organize “real” humanitarian corridors.