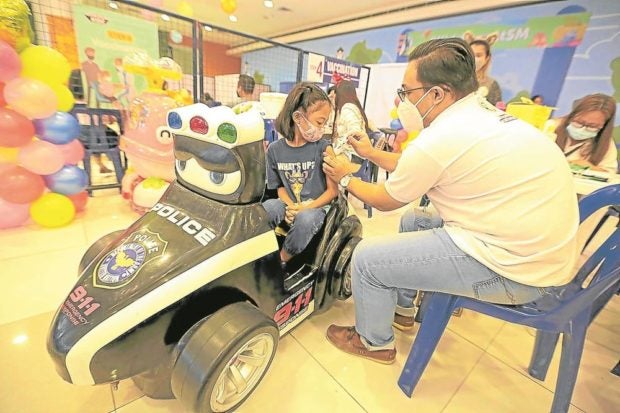 PEDIA INOCULATION | A girl watches as a health worker injects her with a COVID-19 vaccine at a vaccination site in SM Masinag. (GRIG C. MONTEGRANDE / Philippine Daily Inquirer)

MANILA, Philippines — Health authorities have drawn up new plans to ensure that the COVID-19 vaccination drive would continue as they expect it to slow down once the election campaigns for local posts start next week.

Dr. Kezia Rosario, co-leader of the National Vaccination Operations Center (NVOC), said there should be no letup in the mass inoculation even during the election period leading to the May 9 polls to prevent coronavirus infections from increasing.

The campaign for local positions will kick off on March 25 and local officials could be preoccupied with courting voters. The campaign period for national posts opened earlier, on Feb. 8.

“We anticipate the possibility that local government units will have fewer output because of the election and the campaign. Therefore, we also are looking at other means to vaccinate,” Rosario said at Saturday’s Laging Handa briefing.

A key element in the new approach to get more people vaccinated is to involve the private sector, with jabs to be administered in economic zones, and in private and primary care clinics, she said.

“Fewer work for them, meaning their workforce and the vaccination program will not be totally dependent on local government units,” she said.

The Department of Health (DOH)plans a special vaccination drive this month that would give priority to specific areas with low jab rates in order to reach its target of fully inoculating 70 million Filipinos by the end of March.

A year since the country began its vaccination program, three out of five Filipinos have been fully inoculated against the coronavirus, government data show.

As of March 17, 65 million Filipinos have been fully vaccinated, equivalent to 59 percent of the country’s estimated 110 million population. Some 11.4 million, or 10.37 percent, have received a booster shot.

According to Rosario, the vaccination drive has slowed in the “last mile” of the campaign.

The remaining unvaccinated individuals would be harder to convince to get the jab as they are the ones who have doubts, fears and hesitancy, she said.

The government will target specific areas where it will deal with the “intricacies” that have resulted in large numbers of people unwilling to be vaccinated and employ the appropriate measures to encourage the local population to get the jab.

“What we see is we could launch special vaccination days in certain areas,” Rosario said.

She cited Cebu province, the Bangsamoro region, and certain provinces in the Soccsksargen region as areas with significant numbers of unvaccinated individuals.

The NVOC is also looking at areas where many individuals have yet to get their second dose, Rosario said.

The targeted campaign will follow the extended fourth national vaccination drive, which ended on Friday after reaching 97 percent of its target of 1.87 million individuals. These include 255,000 12-year-old to 17-year-old children and over 90,000 senior citizens.

Rosario said the NVOC has found that there was a need to visit and talk to senior citizens to convince them to get vaccinated. Health experts say the elderly face higher risks of severe illness.

Rosario urged the rest of the unvaccinated population to get their primary or booster shots.

“The aim of the government is really to protect as many individuals as we can so that we will prevent the next surge of cases and hopefully there will be no more surge of cases later on,” she said.

Health Secretary Francisco Duque III earlier said that the full vaccination of 70 percent of the population and the administration of the first dose on 80 percent of all senior citizens were two of the four conditions set by the government for declaring certain areas under alert level 1, the least restrictive of the pandemic regulations.

The two other conditions are low to minimal risk classification caseload and low-risk healthcare utilization rate, he said.

Metro Manila and 47 other areas are currently under alert level 1.

On Saturday, Duque said the government has yet to complete its COVID-19 transition plan, dubbed the “New Normal Roadmap,” which will contain strategies for various sectors on how to “live with the virus.”

He said that the National Economic and Development Authority (Neda) was still working on the economic component of the plan, which would be a “very comprehensive map on shifting to the new normal.”

Its major components are public health, security and the economy, and will be crafted by the DOH, Neda and the Inter-Agency Task Force for the Management of Infectious Diseases.

On Friday, Health Undersecretary Maria Rosario Vergeire said the DOH would resume issuing its daily case bulletins if COVID-19 cases start to climb again and would highlight the number of severe and critical cases as well as the health-care utilization rate.

The daily cases from March 10 to March 16 continued to dip to an average of 534, down by 29 percent from the previous week.

Severe and critical COVID-19 admissions accounted for 12 percent of cases as of March 15 and total healthcare utilization rate was 18 percent.

—WITH REPORTS FROM KATHLEEN DE VILLA AND INQUIRER RESEARCH