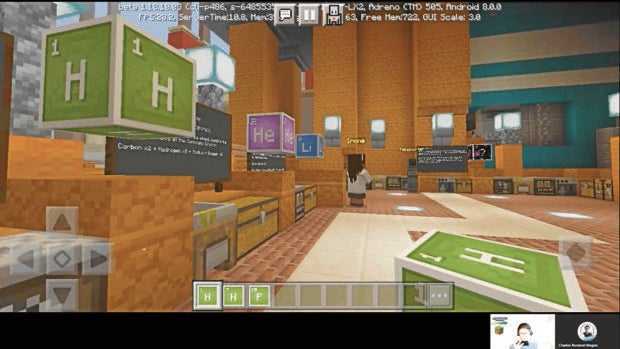 NEW TEACHING METHOD | A video game designed by Minecraft acquaints students with the chemistry table as they learn to form compounds from its elements. (SCREENGRAB FROM THE MINECRAFT EDUCATION EDITION APP)

MANILA, Philippines — Study your lessons, yes. But do it while playing video games?

The Department of Education (DepEd) is embracing the concept of “game-based teaching,’’ after the restrictions prompted by the pandemic forced the agency to adopt new methods to help enliven the learning experience of students.

In partnership with Microsoft Philippines, DepEd on Wednesday launched the mobile app Minecraft Education Edition, which incorporates school lessons into the sandbox video game — a format that gives players a lot of creative leeway to adjust or reshape their game settings.

According to Education Undersecretary Alain del Pascua, the Philippines is one of two countries (the other being Saudi Arabia) where Minecraft has launched its mobile version.

Students and teachers from public and private schools nationwide can download the app on their Android phones using a Microsoft account provided by DepEd.

“To our 900,000 teachers and 23 million learners, use this opportunity to enhance … teaching and learning through technology,” Del Pascua said.

For lessons on geography and culture, video designers have created “worlds” that approximate any geographical area and its cultural characteristics—for instance, Luzon, Visayas or Mindanao—for the player-students to learn about.

Through these worlds, they study other facets, such as the history and the peoples of that given locality.

Minecraft is developing virtual field trips which may be implemented next school year.

A tutorial lesson on chemistry through Minecraft would allow students to explore the different elements that make up the chemistry table and experiment on creating compounds.

The players move slides through an “element constructor,” as they pick the protons, electrons and neutrons they need to come up with an element.

If the students want to make a molecule of hydrogen, they need to adjust the constructor to get two protons and two electrons—the composition of that molecule.A “compound creator,” on the other hand, allows them to form compounds from mixing the elements they have chosen.

To help teachers unfamiliar with Minecraft, DepEd will provide training so they themselves can learn to integrate that tool in their instruction.

Mark Anthony Sy, who heads the department’s Education Technology Unit, said: “The game-based approach is something that we need to consider, to [encourage] critical thinking, creativity, collaboration and logical reasoning [in] solv[ing] local issues and problems.”