MANILA, Philippines — “It takes a leader, who is competent, qualified and experienced to turn the promises of ‘Unity,’ ‘Bilis Kilos,’ ‘Angat Buhay’ into reality,” Sen. Panfilo Lacson said on Saturday during the last part of the “PiliPinas Debates 2022,” which was hosted by the Commission on Elections (Comelec).

He was referring to the campaign slogans of the three other presidential candidates — the “Unity” of former Sen. Ferdinand Marcos Jr., “Bilis Kilos” (quick action) of Manila Mayor Isko Moreno, and “Angat Buhay” (better life) of Vice President Leni Robredo.

Lacson implied that he could fulfill those promises.

“We need a president who is ready to fight for all of you so that the Filipino people will win,” he said in Filipino. 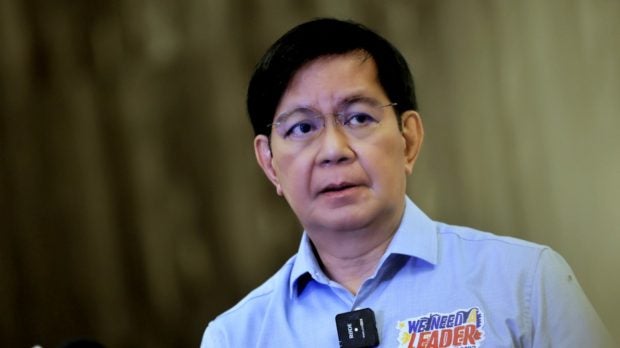 Sen. Panfilo Lacson talks to the media during a press conference in Cauayan, Isabela on Monday, Mar. 14, 2022. (LACSON-SOTTO MEDIA BUREAU)

He stressed that only he among the 10 presidential candidates actually put his life on the line for the country as a military officer and then as chief of the Philippine National Police.

In the process, he also took a swipe at Marcos — who excused himself again from the presidential debate.

“From being a soldier and a law enforcer who fought against terrorism, communist rebels, and hardened criminals; as chief PNP who disciplined and cleaned the ranks of the police; as a senator who never got tainted by corruption, I would want to continue serving our country,” Lacson said.

“Among all the presidential aspirants, whether here or always absent, nobody else except me who deliberately and actually put his own life on the line to save anyone from danger,” he added.

It was not the first time that Marcos skipped a presidential debate. Last Feb. 27, he also skipped the debate hosted by CNN Philippines, which all of the other presidential candidates attended.

Neither was it the first time when a candidate pointed out his absence.  In this debate, Robredo, in her own closing speech, said that the public should not go looking for people who did not want to show up.

While the debate was taking place, Marcos was campaigning in Marikina City.

The former senator is currently the frontrunner in a Pulse Asia survey conducted from Feb. 18 to 23. About 60 percent of the respondents picked him, a commanding lead over Robredo who got 15 percent.

Lacson was ranked fifth, grabbing 2 percent of the votes.