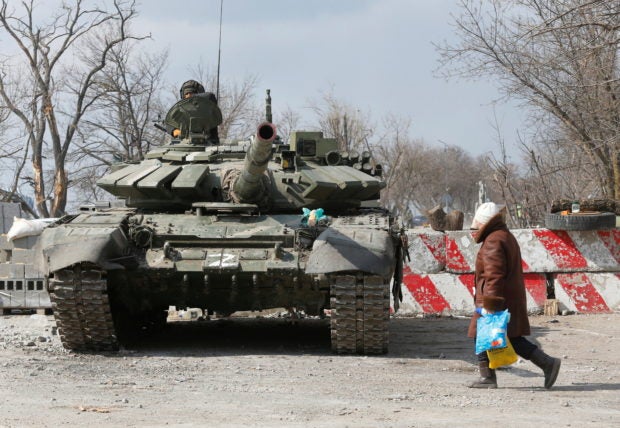 A local resident walks past a tank of pro-Russian troops during Ukraine-Russia conflict in the besieged southern port city of Mariupol, Ukraine March 18, 2022. REUTERS/Alexander Ermochenko

KYIV/LVIV, Ukraine — U.S. President Joe Biden sought to prevent Beijing from giving new life to Russia’s invasion of Ukraine in a video call with his Chinese counterpart on Friday as stalled Russian forces pressed on with bombardments of towns and cities.

With Russia looking to regain the initiative, three missiles landed at an airport near Lviv, a western city where hundreds of thousands thought they had found refuge far from Ukraine’s battlefields.

The Russian defense ministry said it was “tightening the noose” around the besieged southern port of Mariupol, where officials said more than 1,000 people may still be trapped in makeshift bomb shelters beneath a destroyed theatre.

Ukraine said it had rescued 130 people from the theatre’s basement after the building was flattened by Russian strikes two days ago. Russia denies hitting the theatre and says it does not target civilians.

China is the one big power that has yet to condemn Russia’s assault and Washington says it fears Beijing may be considering giving Moscow financial and military support, something that both Russia and China deny.

Xi said conflicts such as the events in Ukraine were in no one’s interests, and that NATO should hold talks with Russia to resolve the factors behind the conflict, Chinese state media reported, adding that the call had been at Biden’s request.

The White House said only that the two men spoke for just under two hours. Earlier, U.S. Deputy Secretary of State Wendy Sherman said Xi should tell Russian President Vladimir Putin to end “this war of carnage” in Ukraine.

At the start of the fourth week of Putin’s attempt to subdue what he calls an artificial state undeserving of nationhood, Ukraine’s elected government is still standing and Russian forces have not captured a single big city.

Putin promised tens of thousands of people waving Russian flags at a soccer stadium in Moscow the “special operation” would succeed.

“We know what we need to do, how to do it, and at what cost. And we will absolutely accomplish all of our plans,” Putin said, adding that, when needed, Russian soldiers “shield each other from bullets with their bodies like brothers.” 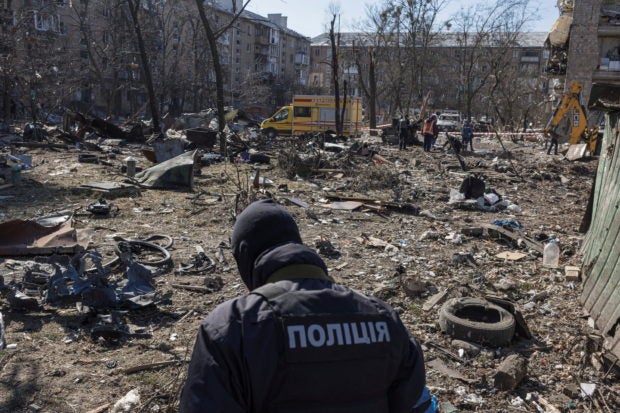 A Ukrainian policeman secures the area at a residential district that was damaged by shelling, as Russia’s invasion of Ukraine continues, in Kyiv, Ukraine, March 18, 2022. REUTERS/Marko Djurica

State television briefly cut away from his speech in mid-sentence; Kremlin spokesman Dmitry Peskov said later the interruption was due to a technical fault.

Ukraine said its troops had prevented their Russian adversaries from making any fresh advances on Friday and the Russians had problems with food, fuel, and communications.

Britain said Russian forces had made minimal progress this week. “Ukrainian forces around Kyiv and Mykolaiv continue to frustrate Russian attempts to encircle the cities,” the UK defense ministry said.

Jakob Kern, emergency coordinator for the crisis at the U.N. World Food Programme, said Ukraine’s “food supply chain is falling apart. Movements of goods have slowed down due to insecurity and the reluctance of drivers”.

Oksana Zalavska, 42, fled Mariupol two days ago after staying in an overcrowded bomb shelter where adults ate one tiny meal a day as rations were low.

“Now I know everything about starvation in 2022,” she said.

WFP, which feeds people in global crisis zones, also buys nearly half of its wheat from Ukraine. Kern said the war has already driven global food prices to all-time highs, and could cause “collateral hunger” in poor countries worldwide.

READ: Over 3 million have fled fighting in Ukraine

Troop columns bearing down on Kyiv from the northwest and east have been halted at the gates of the capital by fighting. But residents have endured nightly deadly missile attacks.

Debris from a missile blew a large crater in the ground in the middle of a residential block where a school was also located in northern Kyiv on Friday, shattering hundreds of windows and leaving debris scattered around the complex.

“This is a war crime by Putin,” said Lyudmila Nikolaenko, visiting her son, who lived in one of the apartments hit. “They say they aren’t hitting regular people, they say we are firing at ourselves.” 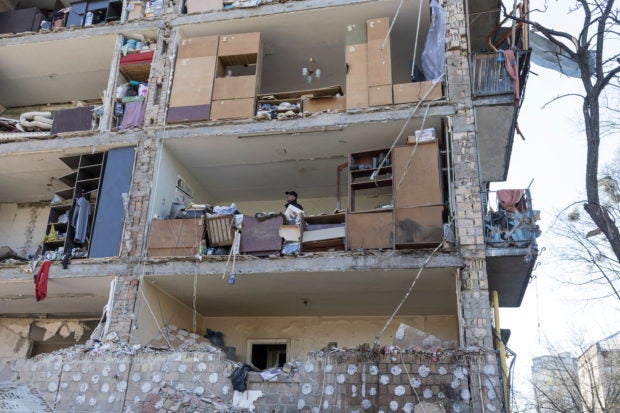 A man stands inside his apartment after a residential district was damaged by shelling, as Russia’s invasion of Ukraine continues, in Kyiv, Ukraine, March 18, 2022. REUTERS/Marko Djurica

Kyiv and Moscow have both described progress in peace talks this week towards a political formula that would keep Ukraine out of the NATO alliance but protected with some other form of guarantee. Ukraine has demanded an immediate ceasefire and withdrawal of Russian troops and both sides accused each other on Friday of dragging out the talks.

With financial sanctions and diplomatic ostracism cutting Russia off from advanced economies, China is Russia’s last big economic lifeline. Putin and Xi signed a “no limits” friendship pact three weeks before the invasion which repeated some of Russia’s grievances over Ukraine.

China has so far been treading a careful line, abstaining in votes over U.N. resolutions condemning Russia while declining to refer to the assault as an invasion criticizing the West.

Biden, who has described Putin as a “murderous dictator”, would make clear to Xi that China “will bear responsibility for any actions it takes to support Russia’s aggression”, Secretary of State Antony Blinken told reporters on Thursday.

“Beijing will do everything in its power to avoid having to openly take sides, but its formerly relatively cost-free relationship with Russia has become complicated and is now exposing China to growing geopolitical, economic, and reputational risks,” said Helena Legarda, Lead Analyst at the Mercator Institute for China Studies.

Hours before the phone call, China sailed an aircraft carrier through the sensitive Taiwan Strait – shadowed by a U.S. destroyer – a person with direct knowledge of the matter said.