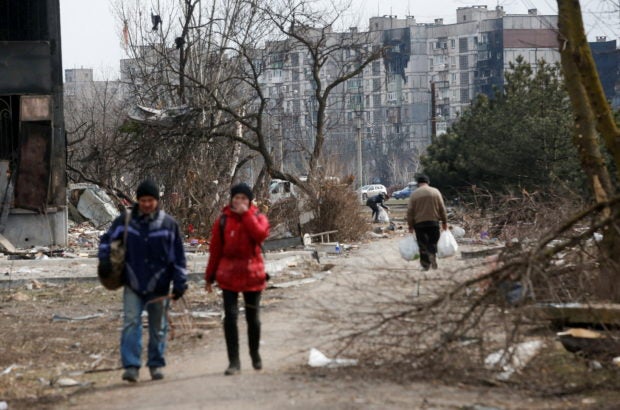 People walk near blocks of flats, which were destroyed during Ukraine-Russia conflict in the besieged southern port city of Mariupol, Ukraine March 17, 2022. (REUTERS)

KYIV/LVIV/WASHINGTON – As Russian troops appeared to stall in their advance on Ukrainian cities, the United States voiced concern on Thursday that China might assist Moscow with military equipment as the war entered its fourth week.

Ukraine’s capital Kyiv came under renewed Russian shelling as rescuers in the besieged port of Mariupol dug survivors from the rubble of bombed buildings. Officials from the two countries met again for peace talks but said their positions remained far apart.

Western sources and Ukrainian officials said Russia’s assault has faltered since its troops invaded on Feb. 24, further dashing expectations of a swift victory and the removal of President Volodymyr Zelenskiy’s government.

Despite battleground setbacks and punitive sanctions by the West, Russian President Vladimir Putin has shown little sign of relenting. His government says it is counting on China to help Russia withstand blows to its economy.

The United States, which this week announced $800 million in new military aid to Kyiv, is concerned that Beijing is “considering directly assisting Russia with military equipment to use in Ukraine,” Secretary of State Antony Blinken said.

President Joe Biden will make clear to China’s President Xi Jiping in a call Friday that Beijing “will bear responsibility for any actions it takes to support Russia’s aggression, and we will not hesitate to impose costs,” Blinken told reporters.

China has refused to condemn Russia’s action in Ukraine or call it an invasion. It says it recognises Ukraine’s sovereignty but that Russia has legitimate security concerns that should be addressed.

While the United States says it wants to avoid direct confrontation with Russia, Chinese military aid to Moscow would pit Washington and Beijing — the world’s two biggest powers — on opposite sides of the largest assault on a European state since World War Two.

The war has settled into a grinding pattern of sieges of cities, with Ukrainian officials reporting Russian attacks on schools, hospitals and cultural facilities.

The United Nations human rights office in Geneva said it had recorded 2,032 civilian casualties so far in Ukraine – 780 killed and 1,252 injured. Some 3.2 million civilians, mostly women and children, have now fled to neighbouring countries, the United Nations said.

A fourth straight day of talks between Russian and Ukrainian negotiators took place by videolink, but the Kremlin said an agreement had yet to be reached.

“Our delegation is putting in colossal effort,” Kremlin spokesman Dmitry Peskov said. “Our delegation… is ready to work around the clock – but unfortunately we don’t see such zeal from the Ukrainian side.”

Moscow has previously said it was close to agreeing to a formula that would keep Ukraine neutral, one of its demands.

Ukrainian presidential adviser Mykhailo Podolyak said the negotiations were complicated. “The positions of the parties are different. For us, fundamental issues are inviolable,” he said.

Ukraine has said it is willing to negotiate an end to the war but will not surrender or accept Russian ultimatums. It is sticking to its core position that it retain sovereignty over areas occupied since 2014 by Russian and pro-Russian forces.

Kyiv and its Western allies say Russia launched the war to subjugate a neighbour Putin calls an artificial state. Moscow says it is carrying out a “special operation” to disarm Ukraine.

Ukraine’s Zelenskiy addressed the German Bundestag by video link on Thursday, pulling no punches in a speech that invoked the Holocaust and the Berlin Wall, and seemed intended to shame pro-Russian politicians in Germany, Moscow’s main energy buyer.

“Every year politicians repeat ‘never again’,” said Zelenskiy, who is of Jewish heritage, citing a slogan used to mark the Holocaust.

“And now we see that these words are simply worthless. In Europe a people is being destroyed, they are trying to destroy everything that is dear to us, what we live for.”

The Russians have failed to capture a major city in the face of spirited resistance from Ukrainian forces protecting residential areas under daily bombardment.

Rescuers in Mariupol, a southern port city, dug survivors from the rubble of a theatre that officials said had been hit by an air strike on Wednesday as civilians took shelter there from bombardments. Russia denies striking the theatre.

Mariupol has suffered the worst humanitarian catastrophe of the war, with hundreds of thousands of civilians trapped in basements with no food, water or power. City officials say they are still not able to estimate the number of casualties from the theatre.

“Yesterday and today, despite continuous shelling, rubble is being cleared as much as is possible and people are being rescued. Information about victims is still being clarified,” the city council said in a statement.

Russian Foreign Ministry spokesperson Maria Zakharova said the allegation that Russia had bombed the theatre was a lie, and that “Russia’s armed forces don’t bomb towns and cities”.

The World Health Organization said on Thursday it has verified 43 attacks on healthcare facilities in Ukraine that have killed 12 people and injured dozens more, including health workers.

“In any conflict, attacks on healthcare are a violation of international humanitarian law,” WHO Director-General Tedros Adhanom Ghebreyesus told the U.N. Security Council, without specifying who was to blame for the attacks.

Northeastern and northwestern suburbs of Kyiv have suffered heavy damage but the capital itself has held firm, under a curfew and subjected to deadly rocket attacks nightly.

A building in Kyiv’s Darnytsky district was extensively damaged. As residents cleared glass, a man knelt weeping by the body of a woman covered in a bloody sheet.

Ukrainian Defence Ministry spokesperson Oleksandr Motuzyanyk said Russian forces had made no significant advances around Kyiv in the past 24-48 hours and had resorted to “chaotic” shelling.

“The Ukrainian armed forces are making every effort to stop the enemy attacking from that area,” he told a press briefing in Kyiv. He said several residential buildings had been damaged by downed missiles, causing civilian deaths.

“This is a war crime,” he said, but gave no exact numbers.

British military intelligence said on Thursday that Russia’s invasion has largely stalled on all fronts, with Russian forces suffering heavy losses and making minimal progress on land, sea or air in recent days.

Viacheslav Chaus, governor of the region centred on the frontline northern city of Chernihiv, said 53 civilians had been killed there in the past 24 hours. The toll could not be independently verified.