MANILA, Philippines — Despite amply verified pieces of evidence, as well as numerous court convictions and decisions, regarding the illegally acquired assets of the Marcos family, Ferdinand “Bongbong” Marcos Jr. on Wednesday claimed that “there’s a lot of fake news involved there.”

But the Marcos scion and namesake of the former dictator did not specify which detail about their ill-gotten wealth and estate tax cases are “fake” during the Kapihan sa Manila Bay forum.

“There’s a lot of fake news involved there, let’s leave it to the lawyers to discuss it because the so-called facts that they quote are not facts at all,” he said.

Based on the accomplishment report of the Presidential Commission on Good Government (PCGG), the government is still trying to recover more than P125 billion worth of Marcos assets that are allegedly part of the family’s ill-gotten wealth.

Also, the Marcos family has a pending unsettled estate tax amounting to around P203 billion. 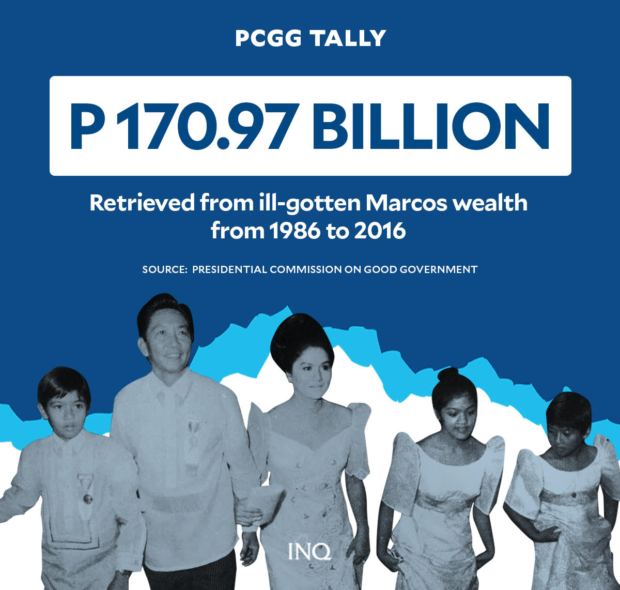 Atty. Vic Rodriguez, Marcos Jr.’s spokesperson earlier claimed that the estate tax of the Marcos family remains unpaid because the properties linked to the case are still under litigation.

“In fact, even BIR (Bureau of Internal Revenue) and the PCGG have arrived at an agreement for the BIR to wait for the decision on the said case before any collection enforcement activities and to establish ownership of the subject properties with certainty to determine with accuracy the fair and just tax base to be used in computing estate taxes, if any,” Rodriguez said.

But the PCGG belied this in a letter dated March 11, stressing that the Bureau of Internal Revenue “already executed its final assessment” on the involved properties as early as 1993 and that “as early as 1997, the judgment on the tax case had become final and executory.”