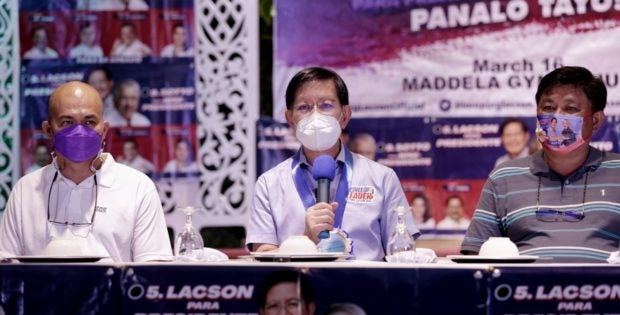 MADDELA, Quirino — Presidential candidate Senator Panfilo Lacson on Wednesday underscored the need for a “strict regulation” of e-sabong activities after President Rodrigo Duterte rejected the call of senators to stop its operations.

Lacson pointed out the social cost of online cockfighting, but he also acknowledged that its continued operation in the country is the decision of the executive department.

(If they don’t want to suspend it—anyway it’s an executive decision right? If they do suspend or not, if there’s a decision that’s already a matter of policy not to suspend, at least there should be strict regulation because it is not regulated.)

(The regulatory authority being exercised by Pagcor should be strict…What’s bad if it’s online, it’s hard to control.)

In a public address aired earlier Wednesday, Duterte justified the continued operations of e-sabong in the country, citing the billions in revenue it generates.

Senators, including Lacson, earlier strongly called on Malacañang and the Pagcor to suspend e-sabong operations in the country until the case of at least 30 cockfight enthusiasts who disappeared is resolved.

(The social cost is huge. Many OFWs can’t go home because their fare to fly back home has gone to e-sabong. Many kids have become addicted and their parents are shouldering their e-sabong expenses, there are people committing suicide.)

(There are police officers who become addicted, resorting to holdup.)

Pagcor collected over P3.6 billion from eight e-sabong licensees from April-December 2021, according to its chairperson Andrea Domingo. From January to March 15, Pagcor was able to collect P1.3 billion from seven licensees, she added.

Domingo said the suspension of e-sabong will not be enough to stop the activity, asserting it will only lead to more illegal e-sabong activities.

But according to Lacson, Pagcor should keep a close eye on the revenues being generated through e-sabong operations.

(Strengthen the regulatory authority of Pagcor or closely monitor the revenues, because what if the revenues being collected are not equivalent to the actual income of e-sabong operators.)