AFP to cooperate in probe of clash that killed Booc 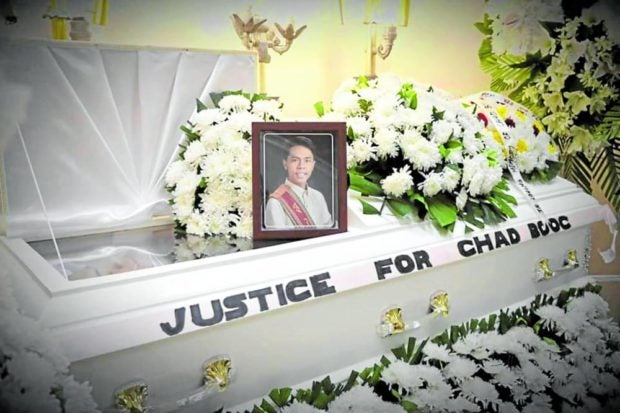 Volunteer teacher Chad Booc was killed in an armed encounter with soldiers, according to the Army. INQUIRER FILES

DAVAO CITY, Davao del Sur, Philippines — A top military commander in the Davao region has insisted that volunteer “lumad” (indigenous peoples) teacher Chad Booc died in an encounter with soldiers as he denied that the victim and his four companions were killed indiscriminately.

In a statement on Sunday, Brig. Gen. Jesus Durante III, commander of the 1001st Infantry Brigade, said that the military would willingly cooperate in case of an investigation.

“[We] can assure the people that there are no irregularities in every operation we conducted, whether it be combat military operations or any other operations other than war, resulting in a volley of gunfire directed [at] him,” he said, referring to Booc.

His statement was in reaction to an observation made by forensic pathologist Dr. Raquel Fortun, who conducted an autopsy of Booc’s body. On Friday, she said that based on the fatal injuries found on the victim’s body, he was likely to have died instantly in a hail of bullets fired with “an intent to kill.”

The preliminary findings from the autopsy conducted on March 7 showed that Booc had multiple bullet wounds, including one that smashed his right elbow. He suffered internal hemorrhages after bullets lacerated his lungs, diaphragm, liver, spleen, stomach, intestines, right kidney and right adrenal gland.

There were also fractures on the rib and thoracic vertebrae and his spinal cord was transected or cut.

“Even if he had been attended to, he would not have survived. It was a homicide,” a report quoted Fortun as saying.

But Durante denied any intention on the part of the soldiers to kill indiscriminately although he explained that in armed clashes, it was possible for the enemy to be hit repeatedly.

“Fighters from contending forces would aim their weapons toward their enemy. When the enemy fires his gun, it produces a loud sound revealing his location, thus our soldiers, say a squad, would aim their guns toward the origin of the gunfire. Thus, it’s very likely that the enemy would be hit by multiple gunshots,” he added.

Information lackingDurante said the autopsy only provided information that the cadaver bore gunshot wounds but could not “conclusively provide information on what Chad Booc was doing at the time of encounter.”

He claimed that Booc became a target because he “fired his gun at the soldiers.”

Durante added that while the military welcomed Fortun’s finding, “we would also like to stress that during an armed encounter [with] limited visibility, our soldiers’ reference points are the sounds and flashes emitted by the guns’ suppressors.”

SOS Network earlier said that Booc was in New Bataan town, Davao de Oro province, in February to check on the communities of two Salugpongan schools near the area in connection with their campaign to reopen the schools after the May 9 elections.

On Feb. 24, the five were killed in what the military said was an “encounter” in Purok 8, Barangay Andap in New Bataan. Booc’s colleagues at SOS Network, however, said the victims were unarmed and that villagers had said there was no encounter between the military and NPA rebels in the area on that day.

A spokesperson for the Communist Party of the Philippines also denied that the five were NPA members although Durante had insisted that they belonged to the Regional Operations Command of the NPA’s Southern Mindanao Regional Committee.

—WITH REPORTS FROM INQUIRER RESEARCH AND GERMELINA LACORTE