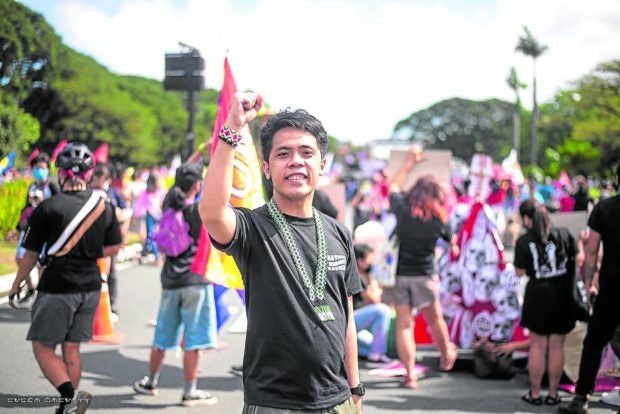 Volunteer teacher Chad Booc was killed in an armed encounter with soldiers, according to the Army.

Social activist groups on Saturday disputed the military’s claim that two volunteer teachers in nonformal schools for indigenous communities and three other people were slain in an armed encounter with Army soldiers in Davao de Oro province.

Among those killed during the alleged early morning clash on Thursday in Barangay Andap, New Bataan town, was Chad Booc, a prominent activist who taught mathematics and science to “lumad” children in Mindanao, and fellow volunteer teacher Gelejurain Ngujo II.

The Save Our Schools (SOS) Network called the killing of Booc and the others a “massacre” of civilians.

“It has been confirmed by locals in Barangay Andap, New Bataan, Davao de Oro that no encounter between the Armed Forces of the Philippines and the New People’s Army (NPA) had transpired in the area,” SOS Network said in a statement on Saturday.

Aya Santos of Sandugo Movement of Moro and Indigenous Peoples for Self-Determination, said Booc and the others were unarmed and were on a vehicle when government troops opened fire on them.

“We urgently appeal to the Commission on Human Rights to investigate the killing of Booc and his companions in order to establish the facts behind the murders,” Santos said.

Marco Valbuena, media officer of the Communist Party of the Philippines (CPP), also said that NPA units in Davao de Oro belied claims of an armed encounter there on Thursday.

Durante said the M653 rifle recovered from the clash site was in Booc’s possession. The weapons used by the other fatalities could have been taken away by their comrades, he added.

“I am not happy with what happened to Chad Booc. We are really sorry for what happened, and we regret it. Our real enemy here is the CPP-NPA,” he said.

According to Durante, one crucial question needed to be answered: “What was Chad Booc doing in Barangay Andap when he is not from New Bataan?”

Arian Jane Ramos, a former rebel who now works for the military, said “Booc could be on a revolutionary integration with the NPA.”

“Booc was denied the glory of having died a revolutionary,” she said.

Jennah, one of the twins who are Booc’s eldest siblings, called the killing a “brutal massacre.”

“I’m 100-percent sure that my brother doesn’t even know how to hold a gun, knowing Chad, knowing him,” she said in an angry voice during a Zoom interview with the Inquirer from Dubai where she had worked as a hotelier before losing her job due to the pandemic.

“It’s not being biased,” she said. “I will not defend someone if they are wrong, even if they are my family or relative. This time, I am defending him because I know the truth.”

She said the remains of her 26-year-old brother have not been turned over to their family as of Friday. “He deserves justice, after all the good that he did for the lumad people,” Jennah said.

Booc was among those who filed a petition against the Anti-Terrorism Act last year.

He had signed on as a volunteer teacher of the Alternative Learning Center for Agricultural Development (Alcadev) which caters to lumad children.

In February last year, he was among seven volunteers of a lumad ‘Bakwit School’ in Cebu City who were arrested by police in a supposed operation to rescue 19 children on the University of San Carlos campus.

They were accused of bringing the children from Talaingod, Davao del Norte, to Cebu without their parents’ consent, and indoctrinating them to become members of the CPP and its armed wing, the NPA.

They were freed more than two months later after the charges were dismissed due to “insufficiency of evidence” and “lack of probable cause.”

On his Facebook page, Booc said he had been a volunteer teacher with the SOS Network since 2017. The nongovernmental organization supports the struggle of the lumad for their ancestral domain and their right to self-determination.

The group honored Booc for choosing “a path less traveled instead of pursuing a conventional career in the IT industry.”

“He boldly and selflessly went out to serve the indigenous communities as a volunteer mathematics and science teacher for Alcadev, a lumad school in Surigao del Sur. Since then, he had devoted his life to serving the people in whatever way he could,” UP Cursor said in a statement.

A member of the group, Rea Guiloreza, whom Booc considered his “ate” (elder sister), said she was shocked when she learned that he was killed in an alleged clash with soldiers.

Guiloreza said Booc from time to time documented on his social media accounts his work as a volunteer teacher, sometimes teaching the lumad other ways of gardening.

“That is why I find it ridiculous how the government would tag and consider him as a recruiter for the NPA,” she said in a phone interview with the Inquirer.

Booc’s sister, Jenna, said that he already considered the lumad his “real family” whom he had spent Christmas with.

Guiloreza, who was two years ahead of Booc in UP Cursor, said the two of them formed a special bond since they both grew up in the province — she in Iloilo and he in Cebu.

She remembered that he often poked fun at his close friends.

“If you don’t know him, you won’t be able to see his jolly side,” she said.

Guiloreza said Booc was always “ready” to volunteer for any work and once helped her campaign when she ran as representative of the computer science students in the College of Engineering student council.

“He is trustworthy. At the same time, he is nice, witty and can be sarcastic most of the time to his close friends,” she said.

—WITH REPORTS FROM JIGGER JERUSALEM AND GERMELINA LACORTE