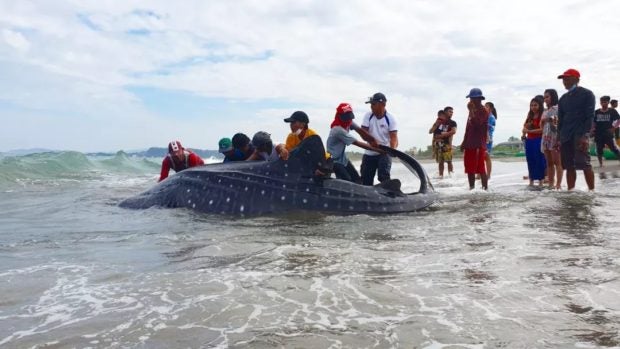 A 10-foot young whale shark is being freed in San Juan, La Union after it was trapped in a fishing net on March 11. (Photo courtesy of Curma)

LAOAG CITY, Ilocos Norte — A 10-foot young whale shark, which was spotted in San Juan town, La Union province, was released into the sea last March 11 after it was trapped in a fishing net.

Sea turtle conservation group Curma, which is based in the town, said fishermen in the area found the whale shark entangled in their net at around 9 a.m. on the same day.

The group said they tried but failed to free the endangered animal immediately while it was in the ocean.

With the help of beachgoers, the fishermen were able to untangle the net after it was brought to the shoreline, which took at least 10 minutes, said Carlos Tamayo, Curma director.

The sighting, said Tamayo, was rare in the area and people were excited to see the young “butanding.”

Teams from the municipal environment office, local police, and the Bureau of Fisheries and Aquatic Resources also helped in freeing the gentle giant back to “its home,” said Curma.

The Department of Environment and Natural Resources noted that the spotting of whale sharks in the sea may indicate “rich marine biodiversity.”

Republic Act No. 8550 or the Philippine Fisheries Code of 1998 gives legal protection to the whale shark, which is tagged as an endangered species. INQ