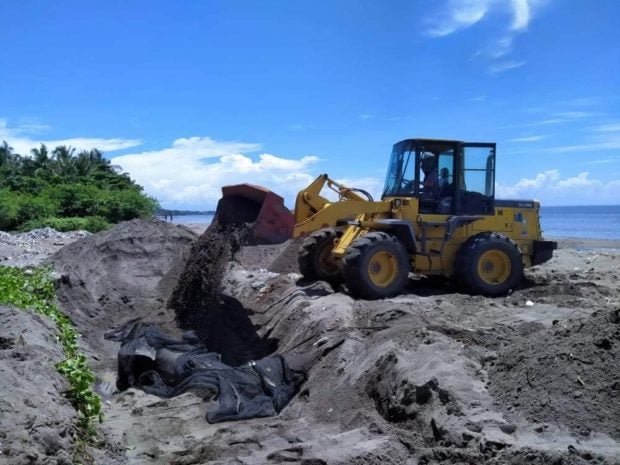 The about two-ton whale shark is shown being buried in Barangay Zone 1A, Pulupandan, on Sunday, after getting trapped and later died in a fish coral. (Photo courtesy of Roy dela Peña)

BACOLOD CITY – A body of an endangered whale shark, locally known as a butanding, was found trapped in a fish coral one kilometer from the shoreline of Barangay Zone 1A in Pulupandan town, Negros Occidental.

The whale shark, which had an estimated weight of about two tons, was buried on Sunday, September 26, according to Marian Jill Sajo Abeto, officer-in-charge of the Bureau of Fisheries and Aquatic Resources (BFAR) in Bacolod.

“Whale sharks (Rhincodon typus) are the largest shark, and indeed largest of any fishes alive today. They feed on plankton and travel large distances to find enough food to sustain their huge size, and to reproduce,” according to the World Wildlife Fund.

“Whale sharks are found in all the tropical oceans of the world. Their white spotted coloration makes these gentle giants easy to distinguish, and popular with snorkelers and divers at sites where they aggregate off the coast,” it added.

At about 7:10 p.m. last Saturday, the Philippine Coast Guard (PCG) sub-station Pulupandan received a phone call from a resident of Barangay Zone 1A, Pulupandan, informing them that a dead whale shark had been towed to the shoreline.

The PCG personnel immediately went to the area and were informed that fisherman Nelson Lim and four other crew members went to their fish corral and discovered the dead whale shark inside.

The fishermen immediately removed the dead whale shark and brought it to the shoreline of Barangay1-A.

The PCG coordinated with the Municipal Agriculturist of Pulupandan and the BFAR for proper turnover and disposal of the marine animal.

BFAR Fishing Regulations Officer 1 Roy dela Peña and the municipal agriculturist decided to bury the whale shark in Barangay Zone 1-A Sunday since there was no available veterinarian to conduct a necropsy.