More than 800 detained in Ukraine protests across Russia 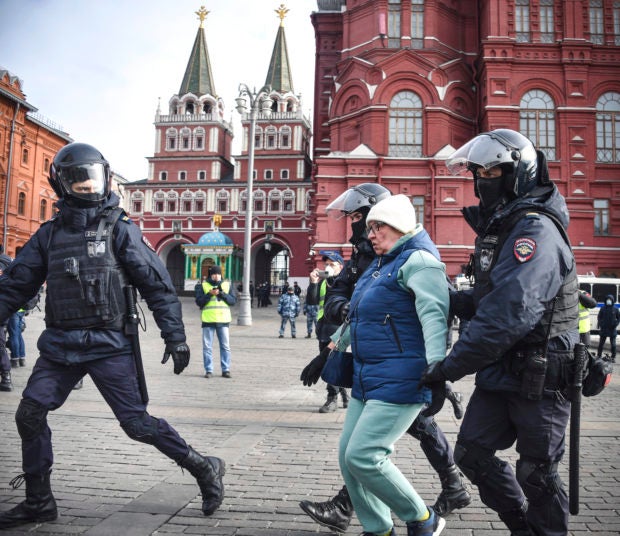 Police officers detain a woman during a protest against the conflict in Ukraine, in Manezhnaya Square in central Moscow on March 13, 2022. AFP

MOSCOW — Russian police detained more than 800 people for protesting Moscow’s “military operation” in Ukraine Sunday, as the conflict continues for a third week.

OVD-Info, which monitors arrests during protests, said police had detained 817 people during demonstrations in 37 cities in Russia.

An AFP journalist reporting from a protest in the capital Moscow witnessed at least a dozen arrests and said police were taking away anybody without press papers.

A young woman was shouting “peace to the world” as she was taken away by two policemen, the journalist said.

Some of the riot police had the letter “Z” in the colours of the Russian flag on their helmets, the AFP reporter said.

The letter, seen on Russian tanks and vehicles in Ukraine, has become a symbol of support for what Moscow calls its “special military operation”.

Law enforcement in Moscow said Sunday evening they had detained around 300 people in the capital’s centre for breaches of public order.

In Russia’s second city Saint Petersburg, AFP saw multiple arrests, including a protester being dragged across the ground.

The city’s central Nevsky Avenue was closed off by police with a dozen police vans parked along the road.

According to AFP, several journalists were detained.

Dressed in a yellow hat and blue jacket, 20-year-old Kristina said she was “expressing her protest” by wearing the colours of the Ukrainian flag.

“It’s scary to go outside, of course. They are detaining everyone. Lots of my friends have been detained in the past few days, some were even expelled from university,” she told AFP.

Protesters risk fines and possible prison sentences by taking to the streets.

OVD-Info says that 14,804 people have been detained at rallies across the country to protest Russian military incursion in Ukraine, which was launched on February 24.