Robredo on being linked to CPP-NPA: ‘It’a lie… Try harder’ 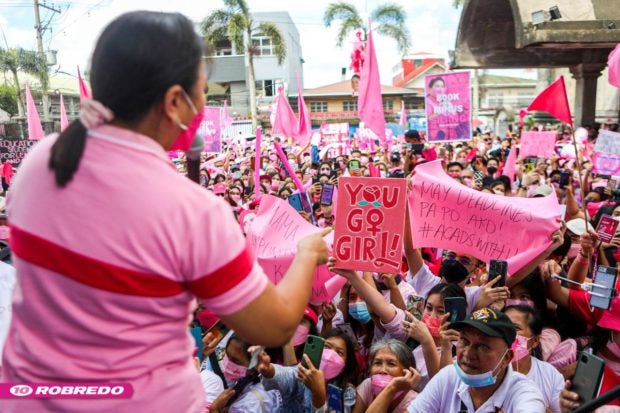 Vice President Leni Robredo reads out placards of supporters in Silang, Cavite on Friday, March 4, 2022. (Image from her Facebook account)

MANILA, Philippines — Vice President Leni Robredo, who is running for president, on Sunday quashed rumors spreading online and through text messages linking her and her volunteers to the Communist Party of the Philippines (CPP) and New People’s Army (NPA).

“Many said they received this [text message]. Then there’s the nonstop red-tagging of me and my volunteers. There’s also the allegation that I would form a coalition government with the CPP-NPA-NDF. To be clear about it: It’s a lie,” Robredo said.

The NDF stands for National Democratic Front, which the government declared a terrorist organization in 2021, as it did the CPP-NPA.

The “red-tagging” came after her March 4 grand rally in Cavite with her running mate, Sen. Francis Pangilinan.

“Once and for all: Left, right, up, down — we are ready to listen to everyone, as long as they are ready to work to lift the lives of Filipinos,” Robredo said.

She said did not believe in violence as a solution to problems and that she would oppose anyone who would use weapons to push their agenda.

She said all her co-workers were aware of this — including those in the uniformed services who appeared to be the target of this type of misinformation.

“I will not form an alliance with such people or those who believe in them. My priority is to work in a peaceful way for the dignity of every person, for the empowered and responsible exercise of freedoms, and fairness,” she said.

“So please. Do you want to hold back the momentum of the people’s campaign? Try harder. Or better yet: Why don’t you just join? Let’s win this.”

On Saturday, the CPP and the NDF both denied talking with Robredo — or any of the other presidential candidates — about the formation of a coalition government.

All this developed after another presidential candidate, Sen. Panfilo Lacson, warned Robredo of a possible “communist infiltration” in her campaign.

He was referring to the alleged presence of CPP legal fronts during the Cavite grand rally, which was attended by an estimated 47,000 people.

In reaction, Robredo’s spokesperson, Barry Gutierrez, said that the “blatant” and persistent” red-tagging was a new low.. He said rival candidates might only be using fear-mongering to dampen the energy of the vice president’s people’s campaign.

Amid flak over Cavite rally tweet, Lacson says he ‘never red-tagged anybody’