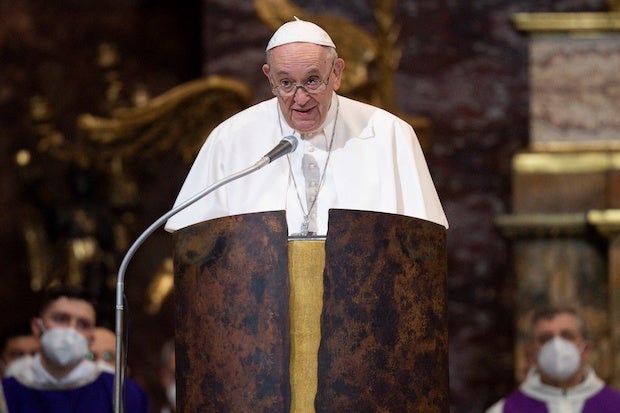 Pope Francis speaks to the audience during the Holy Mass on the 400th anniversary of the Canonization of St. Ignatius of Loyola, Saint Isidoro the Farmer, Francesco Saverio, Saint Teresa of Jesus, and Filippo Neri, at the Jesuit Church of the Most Holy Name of Jesus, in Rome, Italy, March 12, 2022. (Vatican Media/Handout via REUTERS)

VATICAN CITY — Pope Francis issued his toughest condemnation yet of the invasion of Ukraine, saying on Sunday the “unacceptable armed aggression” must stop.

Speaking to thousands of people in St. Peter’s Square for his Sunday blessing, Francis also said that the killing of children and unarmed civilians was “barbaric” and with “no valid strategic reason.”

He called the besieged city of Mariupol a “martyred city” and again appealed for “truly secure humanitarian corridors” to allow residents to evacuate.

“In the name of God I ask you: stop this massacre!” the pope said, adding that Ukrainian cities risked “being reduced to cemeteries”

The pope has not used the word “Russia” in his condemnations of the war since Russian President Vladimir Putin ordered the invasion on Feb. 24.

But his choice of words, such as “armed aggression” and “no valid strategic reason,” appear aimed at contesting Moscow’s justifications for the invasion.

Russia calls its action a “special military operation.” Last Sunday Francis implicitly rejected that term, saying it could not be considered “just a military operation” but a war that had unleashed “rivers of blood and tears.”

Moscow says its action is designed not to occupy territory but to demilitarize and “de-Nazify” its neighbor. It has also denied targeting civilian areas.

Read Next
Russia strikes military base near Polish border – Ukraine
EDITORS' PICK
Metro Manila now at moderate risk for COVID-19 — DOH
Look Through: Super Typhoon Karding barrels through parts of Philippines
House energy committee chair Arroyo bats for cheap electricity
Motorcycles, smartphones, and cash prizes up for grabs in TNT’s ‘Tuloy Ang Saya’ Raffle in Mindanao
Do all the things you do, faster
POGOs not linked to Illegal online gaming, says Pagcor
MOST READ
Robredo supporter tackles elephant in room: No massive fraud in 2022 polls, surveys were just right
Shopee PH gets flak for getting Toni Gonzaga
DepEd: We are in a crisis situation in education sector
Lives destroyed as armyworms invade Philippine ‘onion capital’
Don't miss out on the latest news and information.