Amid flak over Cavite rally tweet, Lacson says he ‘never red-tagged anybody’ 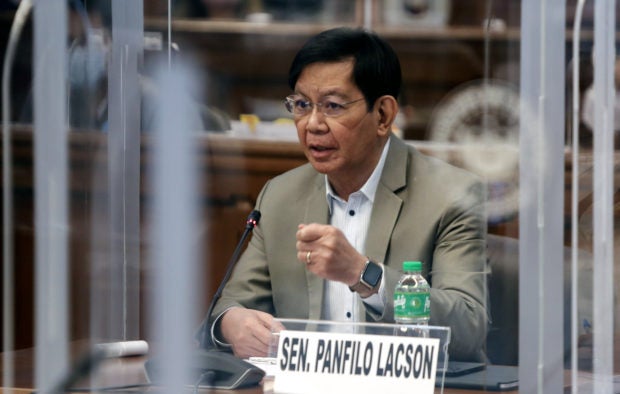 Sen. Panfilo “Ping” Lacson during one of the hybrid hearings in the Senate. Bibo Nueva España / Senate PRIB file photo

MANILA, Philippines — After earning flak for his tweet on a solon’s accusation against participants in a campaign rally in Cavite, presidential candidate Senator Panfilo Lacson on Monday denied he “red-tagged anybody.”

“I never red-tagged anybody. I was simply warning those concerned to be wary of a possible coalition government with a movement whose sole objective is to seize power,” Lacson said in a tweet.

“Insurgency, like corruption, must end if we want peace and prosperity,” he added.

Lacson said this following his tweet on Sunday, where he reacted to a news report about Cavite 7th District Rep. Jesus Crispin “Boying” Remulla’s allegations that participants of a rally in Cavite were either paid to join or were trained by the National Democratic Front (NDF).

“This is worrisome. A coalition government with the CPP/NPA/NDF (Communist Party of the Philippines-New People’s Army-NDF) will set back the gains of the government’s efforts to end the country’s decades-old insurgency problem,” Lacson said in a tweet on Sunday.

After this, Lacson was slammed for “red-tagging” the participants in the rally.

The Cavite chapter of Lacson’s party, Partido Reporma, appealed for an end to “baseless claims” against the presidential candidate.

(We are appealing that the baseless claims against Senator Lacson be stopped because all of us want to attain long lasting peace in the country.)

(As a loyal son of Cavite, Sen. Lacson’s love for the province is unconditional. We witnessed his genuine desire to provide decent lives for every Filipino. As a fellow Caviteño like us, he has repeatedly said he will not embarrass us.)

The party official also pointed out that Lacson served as an intelligence officer for the Philippine National Police (PNP), where the senator eventually became its chief.

(He knows that for every claim, there should be a basis. He is an expert in fact-checking. Because of this, Senator Lacson’s intelligence network is wide. The government has long wanted to end the insurgency in the country that has led to the loss of lives.)

(All of us want peace. But until now, there is a genuine threat of insurgency and they continue to recruit young people. They are

Rodriguez also came to the defense of Lacson, saying the presidential candidate did not say that all of the participants in the rally had connections with the CPP-NPA-NDF.

The party official said Caviteños are free to attend any rally they want to participate in, but he added that Lacson just wanted to caution participants regarding possible security threats.

While Remulla did not specify which rally he was referring to, he mentioned the color pink, which is the campaign motif of presidential candidate Vice President Leni Robredo and vice presidential contender Senator Francis Pangilinan in the 2022 national elections.

Such claims, the council said in a statement issued Sunday, is an insult on the dignity of Cavite province residents who only seek good governance. It also said that crowd that attended Robredo’s rally showed up due to volunteerism.

Read Next
Russia says it will open humanitarian corridors to Ukrainian cities on Monday
EDITORS' PICK
Look Through: Super Typhoon Karding barrels through parts of Philippines
Do all the things you do, faster
House energy committee chair Arroyo bats for cheap electricity
Motorcycles, smartphones, and cash prizes up for grabs in TNT’s ‘Tuloy Ang Saya’ Raffle in Mindanao
POGOs not linked to Illegal online gaming, says Pagcor
Metro Manila now at moderate risk for COVID-19 — DOH
MOST READ
Robredo supporter tackles elephant in room: No massive fraud in 2022 polls, surveys were just right
Airlines cancel 2,000 US flights for Thursday
Comelec invalidates win of sitting governor in Negros Oriental
‘Shopee’ trends on Twitter after Toni Gonzaga becomes its new endorser
Don't miss out on the latest news and information.