MANILA, Philippines—Through many decades, the world has been a witness to the many strides and achievements women have made in the labor market.

In celebration of women’s month, in this article, INQUIRER.net will detail some facts and figures on the current situation of women in the labor force.

Across the globe, female labor force participation has gone up over the past three decades.

However, analysis by consumer company Statista noted that progress for female labor participation “remains behind the rates for male participation in the labor market.”

In many developing countries, the ongoing COVID-19 pandemic has further aggravated the slow progress of female labor force participation, as the pandemic leaves many people out of work.

“The labor force participation rate of US women between the ages of 25 and 64 stopped growing in the year 2000, according to the OECD (Organisation for Economic Co-operation and Development), and in 2020 was back down to 1993 levels,” said Katharina Buchholz, data journalist at Statista. 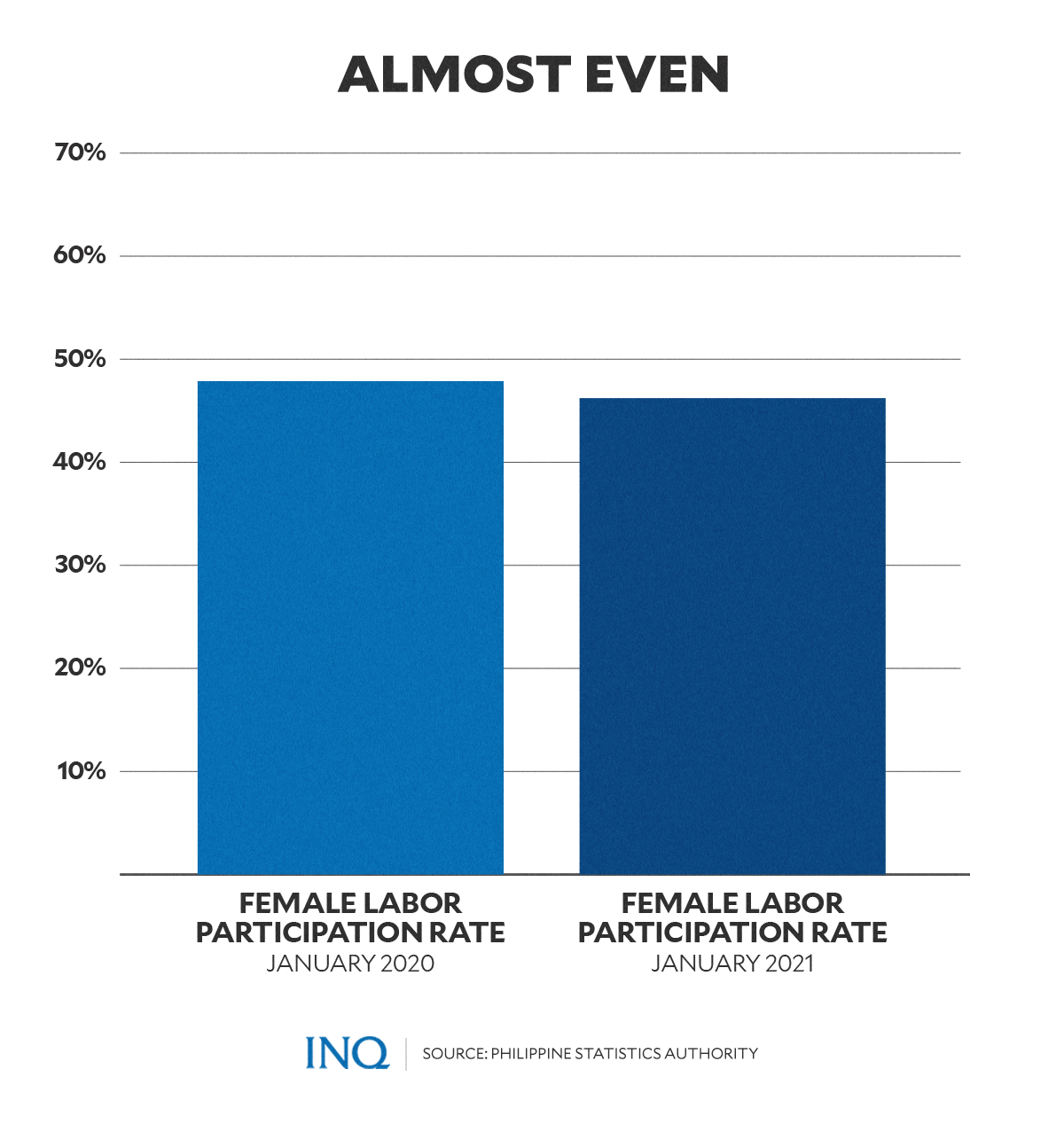 “The coronavirus pandemic seems to have left a significant dent in US female labor force representation in 2020,” she added, adding that “the same dip is visible in Japan, South Korea and also in male labor force participation in the OECD overall.”

On the other hand, however, some countries saw significant increases in female labor force participation rates throughout the years and have “skipped the COVID lull.” 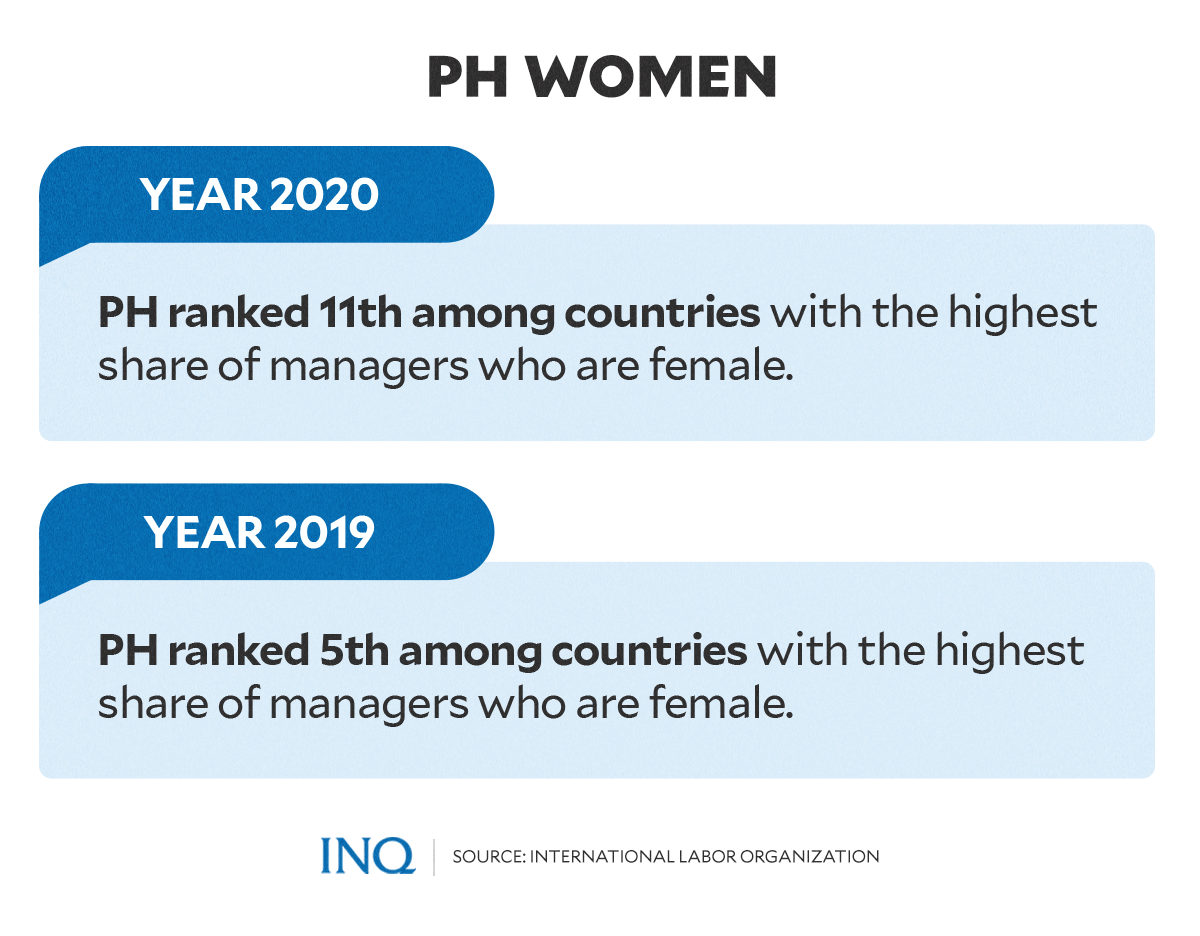 Among these countries, according to OECD data, were France, Germany, and the United Kingdom—all of which have recently achieved female labor participation rates of around 75 to 80 percent.

In the Philippines, the female labor participation rate has also dipped as many Filipinos were left jobless amid lockdowns due to the pandemic—which has shuttered thousands of businesses. 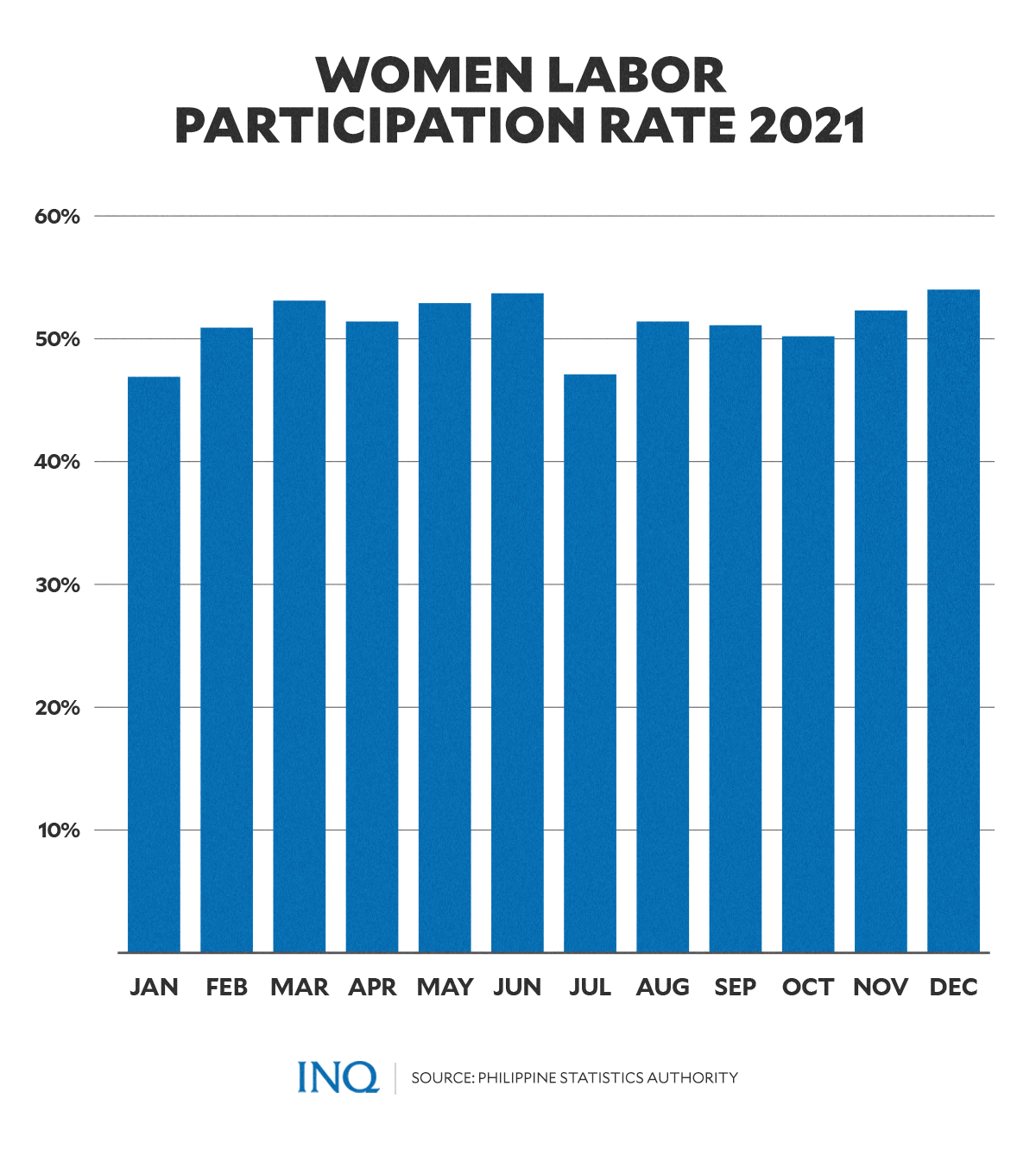 Unemployment and underemployment rates among Filipino women in the labor force increased in 2021, after months of lockdowns and shifting quarantine status across the country.

In January 2020, the unemployment and underemployment rates among the female labor force were 5 percent and 12.5, or around 879,000 unemployed and 2,088,000 underemployed Filipino women.

However, as the government continued to reopen the economy, the female labor force was seen slightly picking up in the country.

The female labor force participation rate in 2021 was as follows:

“The labor force participation rate measures what portion of a population is currently employed or looking for work. It, therefore, includes the unemployed, but not those which are not searching for a job,” explained Buchholz.

“Engaging prime-age workers in the economy is important for efficiently generating growth by utilizing all the labor resources available for producing goods and services in a given country,” she added.

According to global research by JP Morgan published last year, more women are hit by the impact of the COVID-19 pandemic in the marketplace as they remain overrepresented in sectors worst affected by the pandemic and are further weighed down by household responsibilities. 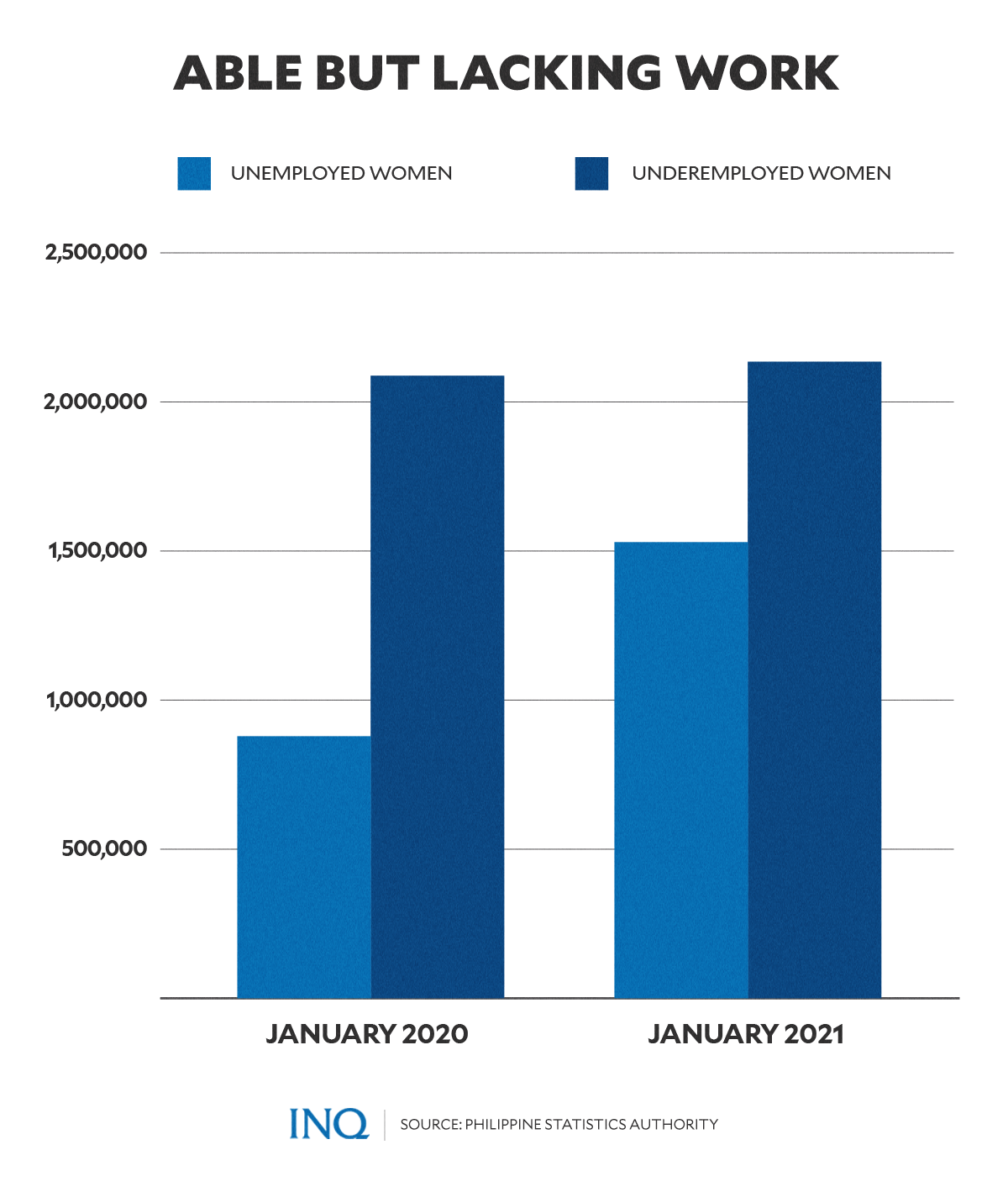 “Women’s participation in the labor market is stalling and financial disparities are widening as women are more likely than men to work in the social sectors hardest hit by the pandemic—such as service industries, retail, tourism, and hospitality—that require face-to-face interactions,” said JP Morgan.

The pandemic, according to the research, caused disproportionate effects on women and their economic status, which resulted in historic setbacks on some metrics, as women faced greater disruption due to the nature of their jobs and greater responsibility for child care.

READ: Study: Women in the workforce have it worse in this pandemic

In December, a study by the Asian Development Bank (ADB) showed that the impact of COVID-19 on the labor sector was heavier on youth and female workers in the Philippines.

“Although many female workers re-entered the labor market in the second half of 2020, labor reallocation patterns pointed to an ‘added worker effect,’ or ‘distress employment’ whereby additional (female) family workers join the labor force to compensate for lost household income,” ADB said.

As a result, more female workers across the ASEAN-5 countries mostly reentered the labor force through “lower quality” jobs, such that the ADB said, “the pandemic could have long-term negative impacts on the working lives of women.”

According to data by the International Labor Organization (ILO), employees in Togo, Nigeria, Jordan, Laos, and Burkina Faso were more likely to have a female boss between 2016 and 2020.

The Philippines ranked 11th in the list of countries with the highest number of female workers in managerial positions by Statista—it was also one of the outliers as the highest-ranked Asian countries along with Laos. 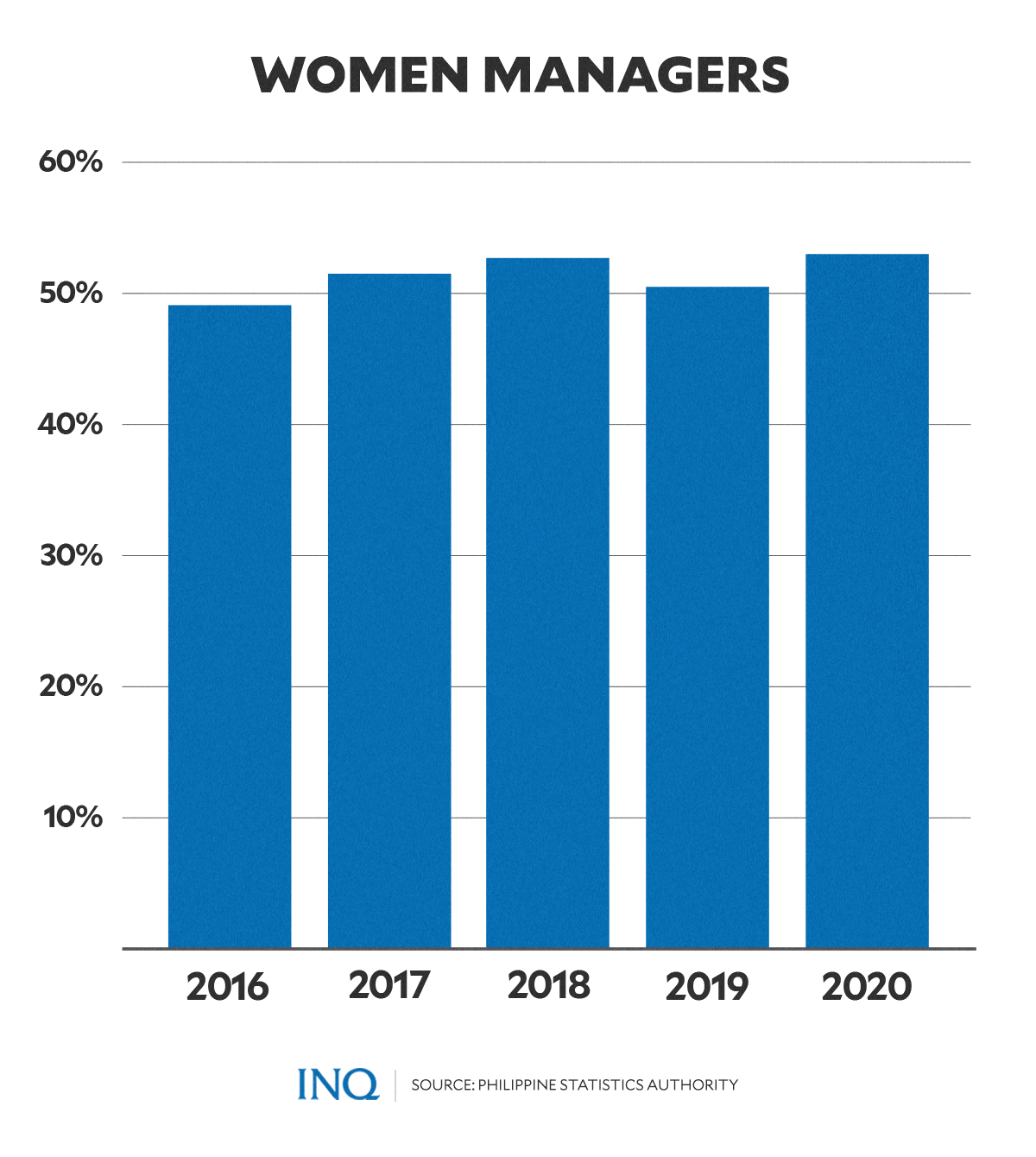 In 2019, the percentage dipped slightly to 50.5 percent, but it started picking up again in 2020 which recorded 53 percent of managerial positions filled by women in the labor force.

According to a separate Statista report published in March last year, the Philippines ranked fifth in countries with the highest number of women in managerial roles.

READ: She’s the boss! PH is 5th among countries with highest number of female execs

The ILO also listed the percentage of senior and middle management positions held by Filipino women from 2016 to 2020. The numbers were as follows:

However, compared to Laos whose high rates of females in managerial positions were in part achieved by its socialist government, Statista noted that the situation is different in the Philippines.

“[W]omen (in the Philippines) are most likely to hold managerial positions in human resources, administration, finance, marketing or public relations – areas the organization defines as business support functions,” a Statista report stated, citing the ILO.

“The success of female managers in the Philippines, therefore, ties in with the strong local business process outsourcing industry,” Statista added.

“Women are over-represented in the sector as a whole and make up as many as two-thirds of employees in data processing and around three-quarters of those working in medical transcription,” the consumer company explained, citing the PSA.

READ: Where Women Are Most Likely to Be Your Boss

Richest women in the world

Every year, Forbes magazine publishes its list of wealthiest people on the planet or the World’s Billionaires List.

The list includes prominent men and women across the globe who have amassed large sums of fortune through their work in different industries.

In 2021, among the women included in the top 30 of the richest in the world list were:

According to Forbes, following her divorce with Bezos, Scott received 25 percent of his Amazon stake. However, in May 2019, she signed the “Giving Pledge, promising to give away at least half of her wealth over the course of her lifetime.”

Over the last several years, Scott has been donating or giving away her fortunes to different organizations. She has reportedly donated around 18 percent of the shares she received from Bezos’s Amazon.

The 2021 World’s Billionaires List also included Filipino women who have been leading different industries in the country. They were: