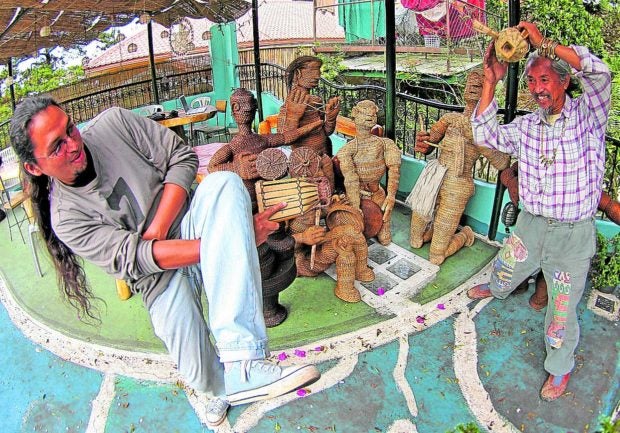 ARTISTS BOTH National Artist for Film Kidlat Tahimik (right) bonds with son, Kidlat de Guia, in this file photo taken in their home city of Baguio. The younger Kidlat, an accomplished cinematographer, photographer and visual artist, died in Spain this week. —EV ESPIRITU

BAGUIO CITY — The son and namesake of filmmaker and National Artist Kidlat Tahimik died on Tuesday in Madrid, Spain, where the latter concluded a six-month exhibition about the country’s colonization by the Spanish empire.

Kidlat de Guia, 46, a visual artist, photographer, and cinematographer, reportedly died in his sleep, according to people close to him, but his immediate family members had yet to issue a formal statement about his death.

“To you … my brother, our brother, our friend, our partner in crime, the playful eye, the comfort zone, the bearer of good and bad news … you … my friend … you! The backbone. My love, our love, love,” Kawayan wrote.

Tahimik had shipped most of his art collection to Spain to put up an installation about the country’s 500-year Spanish colonization from the “perspective of the colonized” at Madrid’s Palacio de Cristal. Titled “Magallanes, Marilyn, Mickey y Fray Damaso. 500 Años de conquistadores rock stars,” Tahimik’s exhibit began in October last year and ended on March 6.

Some of Tahimik’s friends in Baguio said Kidlat was there to help take down his father’s exhibit and bring it home to Baguio.

Kidlat, whose mother is German artist and cultural activist Katrin de Guia, is survived by his widow, theater actress and Baguio Chronicle columnist Lissa Romero, and their two children.

The National Archives has preserved footage of a little-known 1986 People Power event at Baguio Cathedral that was shot by Tahimik (born Eric de Guia), considered the father of Philippine independent cinema. It featured Tahimik’s children, including Kidlat, who were filmed scrambling up a tank that carried soldiers who defected from the late dictator Ferdinand Marcos.

Kidlat was credited as one of the actors in Tahimik’s 1979 independent film, “Sinong Lumikha ng Yoyo? Sinong Lumikha ng Moon Buggy,” and was featured with his siblings in the 1994 cinematic essay, “Bakit Dilaw Ang Kulay ng Bahaghari,” about the bloodless revolution as perceived through Kidlat’s eyes.

Kidlat, a broadcast communication graduate of the University of the Philippines Diliman, produced video work and advocacy materials for nongovernment organizations like International Alert in London in 2008, and directed “Sports for Peace” for the German Technical Cooperation, which his curriculum vitae describes as a peace initiative aimed at young children in Mindanao.

He also developed video projects for the Cartoon Network and Discovery Channel. Kidlat was the country winner in Discovery Channel’s First Time Filmmaker Initiative in 2001, and was given the 2003 Award of Excellence for his film, “Banal Tubig Banal Kahoy” in the Aqua Planet Video Festival.

Kidlat was the cinematographer of his father’s 2015 opus, “Balikbayan #1,” an alternative historical narrative of the Filipino who circumnavigated the planet while serving Portuguese explorer Ferdinand Magellan.

He also served as the cinematographer and editor of the documentary, “Ang Lakaran ni Kabunyan: Kabunyan’s Journey to Liwanag.”

‘1941’: In Cordillera, film is a cultural weapon vs distortion