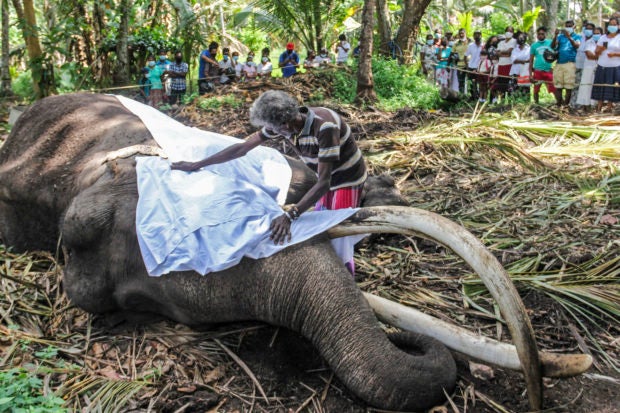 The mahout Wilson Kodituwakku places a white sheet on the body of Sri Lanka’s sacred tusker Nadugamuwa Raja, who carried a golden casket of relics at an annual Buddhist pageant, in Weliweriya on March 7, 2022, as the death sparked a stream of mourners and calls for a state funeral. AFP

COLOMBO — Sri Lanka’s most sacred elephant passed away aged 68 on Monday, prompting an outpouring of grief and a presidential order for the huge cadaver to be stuffed and preserved for posterity.

Nadungamuwa Raja was the most important among 100 elephants used in an annual pageant involving fire-eaters and drummers, tasked with carrying a golden casket of Buddhist relics on its back.

On Monday a procession of mourners — including schoolchildren, priests in saffron robes and an elderly lady with a Zimmer frame — paid their respects to Raja, praying and touching its mighty tusks in reverence.

President Gotabaya Rajapaksa decreed that the animal be declared a “national treasure” and ordered its remains be preserved “for future generations to witness,” his office said.

Raja was due to be handed over to taxidermists later on Monday for stuffing after Buddhist funeral rites have been performed, its owner said through a spokesperson.

Decked out in lights, Raja carried the casket of relics at the annual Esala Perahera pageant, a major tourist draw in the central city of Kandy — performing the role most years from 2006 to 2021.

The elephant even had an armed escort of elite commandos after a 2015 incident when a motorcyclist almost rammed it while on an outing to attend a temple ceremony.

One of Raja’s predecessors, who was also known as Raja, carried the golden casket of 34 relics for exactly 34 years between 1953 and 1986.

When the older Raja died in 1988 aged 72 there was an enormous outpouring of grief and the government declared a national day of mourning.

The older Raja was also preserved and has its own museum within Kandy’s Temple of the Tooth compound, which contains a purported tooth of the Buddha.

Choosing a successor will be a lengthy process.

The chosen elephant has to be from a particular caste with special physical characteristics to qualify.

When the elephant stands, seven points — the four legs, its trunk, penis and tail — must all touch the ground.

The animal must also have a flat back, the tusks must be formed in the shape of a traditional winnow and its height must be about 12 feet (3.6 metres).

An exception was made with Raja, who was only 10.5 feet tall, because it was the tallest in the country at the time.

Raja was born in India and had been gifted to Sri Lanka by an Indian prince.

Elephants are a protected species in Sri Lanka but many are kept as pets, because they are seen as status symbols.

Laws have been tightened in recent years to ban the capture of wild elephants which is punishable with death.

Sri Lanka told: Don’t give elephant to the Philippines