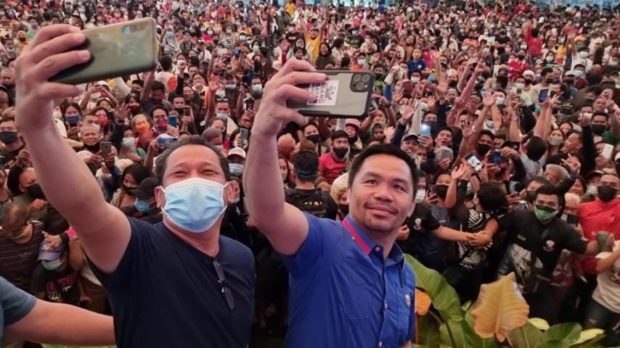 MANILA, Philippines — Senator and presidential candidate Manny Pacquiao on Tuesday said he does not agree with prohibiting campaign motorcades despite skyrocketing prices of fuel, saying an election warrant campaigning of candidates.

(That’s why we call it elections, you can campaign. It’s like we’re reverting to Grade 1. What’s the point of the elections if you can’t campaign?)

The world boxing champ-turned-politician was reacting to the move of vice-presidential candidate Sara Duterte-Carpio banning all political caravans and motorcades in vote-rich Davao City, citing the increasing fuel costs, the inconvenience of traffic jams, and economic losses from the pandemic, as well as increasing prices of basic commodities.

Pacquiao has been conducting motorcades, as well as market and community visits across Metro Manila and nearby provinces in Luzon for his presidential campaign.

He said he is doing this to reach people at the grassroots level and woo them for their votes.

On Tuesday, he went to visit the Aeta community in Brgy. Planas in Porac, Pampanga, and held a dialogue with them to know their concerns. He was the first presidential candidate to do so.

Pacquiao listens to the concerns of the Aeta community. @inquirerdotnet (📸Pacquiao camp) pic.twitter.com/HunyaSehbH

Ancestral land ownership, water for farming to help with food production, farm equipment, education, livelihood,  and access to transportation were among the concerns raised by the indigenous community during the meeting.

In return, Pacquiao promised the Aetas that he would give them back their lands and provide farm equipment and housing.

(The parents do not encourage enough their children to go to school. Many of them have not finished their studies. They instead choose to go to the mountains.)

(Their livelihood is one of their concerns — they don’t have permanent ones. They only rely on harvesting fruits and vegetables and charcoal.)

Nacu said there are about 3,000 registered voters in their village, of which about 350 are from the Aeta community.

No Aetas displaced as PH, US roll out war exercises in Tarlac, mayor assures
20 Aeta kids among first to get vax vs COVID-19 in Zambales
Aeta community cheers dismissal of terror case against two of its members