No Aetas displaced as PH, US roll out Tarlac war exercises | Inquirer News

No Aetas displaced as PH, US roll out war exercises in Tarlac, mayor assures 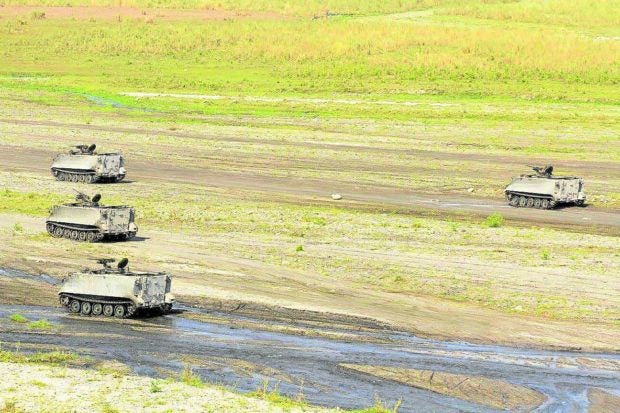 READY FOR BATTLE | Crow Valley in Capas, Tarlac, which adjoins the ancestral land of an Aeta community, has traditionally been used for the war games between the Philippine and US Armed Forces as shown in this photo taken during the Philippine-US Balikatan war exercise in 2016. —PHOTO FROM THE ARMED FORCES OF THE PHILIPPINES FACEBOOK PAGE

Catacutan said that while some 100 Aeta families in Sitio Tarukan, Sta. Juliana village, of Capas live within the “danger zone,” they were not being forced to leave their ancestral land.

The mayor contradicted a post on social media on Friday by Katribu Youth, which claimed that over 200 Aeta families in the upland village of Sta. Juliana were evicted on March 4 to make way for the Philippine-American joint military exercises.

“On the contrary, the Aetas are being asked to remain within their community in Tarukan and not venture along the areas of Crow Valley where live-fire activities will be conducted next month,” he said in an interview on Saturday.

He said the Philippine Air Force had asked the residents not to venture out of the locality to ensure that no one would get hurt during the military exercises.

He explained that Aetas and other residents in the area would usually race to collect shells and metal fragments from Crow Valley to sell to junk shops right after the live-fire exercises.

Sitio Tarukan is only about 143 meters from the O’Donnel riverbed of Crow Valley, where live fires are usually being conducted during the annual military exercises held in the area.

Catacutan recalled that two years ago, Malacañang and the Department of National Defense had proposed to permanently resettle the 100 Aeta families to a 7-hectare local government property in Sitio Flora, Maruglo village, but it has yet to materialize since consultations involving the National Commission on Indigenous Peoples, Aeta tribal leaders and representatives of different national agencies were still ongoing.

He said he attended last month’s consultation in Sta. Juliana presided by Chair Allen Capuyan and was told that the National Housing Authority had already allotted P20 million to build 100 houses for Sitio Tarukan residents in the nearby Sitio Flora. The resettlement site would include a new elementary school building, water supply and small solar farm that would provide electricity to the houses, he said.

But most of the Aetas in the danger zone were still hesitant to take the government’s offer of relocation even if they were assured that they could go back to their sub-village to farm and to look for metal fragments they could sell when there were no military exercises along Crow Valley.

This year’s Balikatan (shoulder to shoulder) in Crow Valley will be held from April 12 to April 23.

Balikatan, on its 37th this year, is the most prominent large-scale exercise between the Philippine and American military to enhance their cooperation and interoperability under the Visiting Forces Agreement signed by the two countries in 1998.It also usually includes noncombat exercise events, like humanitarian assistance, disaster relief, counterterrorism, and other operations.

There are also smaller “war games” between the United States and the Armed Forces of the Philippines, like the Salaknib (shield in the Ilocano language) being held from March 5 to March 24 this year.

The Philippine Army and the US Army Pacific (Usarpac) kicked off over the weekend the three-week Salaknib war games in Nueva Ecija province, with over 1,000 troopers taking part.

Usarpac deputy chief Maj. Gen. Matthew McFarlane maintained that this year’s Salaknib exercise should not only be considered a regular staging of the annual war games but a demonstration of a stronger commitment to ensure a “free and open Pacific.”

McFarlane said that the United States recently published its “Indo-Pacific strategy,” which aimed to “build connections in the region and to bolster security in pursuit of a free and open Pacific ”