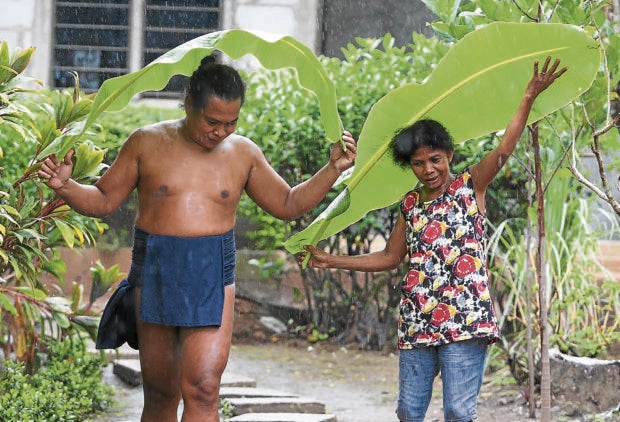 UPROOTED. Thirty years since the eruption of Mt. Pinatubo on June 15, 1991 (lower photo), some 6,000 displaced Aeta families are still longing to return to their ancestral villages from government-built resettlement sites in the provinces of Zambales, Tarlac and Pampanga. Their desire comes from both a spiritual impulse to reconnect to their roots and a need to be economically self-reliant by living off the land. —MARIANNE BERMUDEZ/INQUIRER PHOTO

BOTOLAN, Zambales, Philippines — “The view of Mt. Pinatubo is blurry now,” says Elsa Novo, her gaze fixed to the southeast. “It’s the tallest peak in the middle of that mountain range.”

It is the sight that the 61-year-old Aeta leader catches from the cemetery up on a hill of the Baquilan resettlement in this town on June 1.
Down the hill, two rivers — the Balin-Baquero and Bucao — look like a vast gray highway carved by vehicles going to and from the volcano and a cluster of villages under its shadow.
Those 11 villages are collectively called Baytan by the Aeta tribes of Botolan and part of the ancestral lands they had to abandon weeks before the eruption of Mt. Pinatubo on June 15, 1991.
Acknowledged by the Philippine Institute of Volcanology and Seismology as the first to have reported the signs of an angry volcano 30 years ago, the Aetas have mostly been unable to return home since the cataclysmic disruption of their way of life.
To this day, no state agency has implemented a postdisaster recovery program giving Aetas a say on what to do with the land of their old Baytan. Past government’s efforts had only brought them to safety and ended with their relocation away from Pinatubo, the abode of their deity, Apo Namalyari.

Chito Balintay, an Aeta who once represented the indigenous people’s sector in the Zambales provincial board and an officer of the now-defunct Office for Northern Cultural Communities (ONCC), recalls having to supervise the evacuation of 7,000 Aeta families to public schools in the town center beginning April 1991 on orders of then Botolan Mayor Tito Doble.
It was the first time for lowlanders to see that many Aetas descending from the highlands, says Balintay, 62. The exodus emptied Baytan, which is made up of the villages of Villar, Moraza, Belbel, Burgos, Nacolcol, Palis, Maguisguis, Cabatuan, Poonbato, Owaog Nebloc and Malomboy.
By August that year, the ONCC had counted 35,120 Aeta evacuees (from 7,840 families) fleeing Pinatubo’s fury not only in Zambales but also in Pampanga and Tarlac provinces. By 1992, the number had grown to 10,000 families.
Since then, the 7,000 heads of families who settled in Botolan have grown to 15,000, based on an informal survey conducted by the local government, according to Ladie Manalaysay-de Leon, the municipal IPMR, or indigenous people’s mandatory representative. A head of an Aeta family can represent his immediate household or that of his clan.
In her estimate, the heads or members of some 3,000 families have returned to Baytan for good or on a temporary basis — mainly to farm — since 1997. At least 70 percent of the 1991 evacuees still live in three resettlement sites in Loob-Bunga and Baquilan, both in Botolan; and Dampay Salaza in Palauig town, also in Zambales.
In the 7.5-hectare Bihawo resettlement, which Lubos na Alyansa ng mga Katutubong Ayta ng Sambales (Lakas) bought and developed in Botolan’s village of Mambog in 1993, at least 90 of 200 families have been going up to Villar to farm during the dry months since 1997, according to the group’s elder, Ben Jugatan.
They return to the resettlement when rainy months come, he adds. 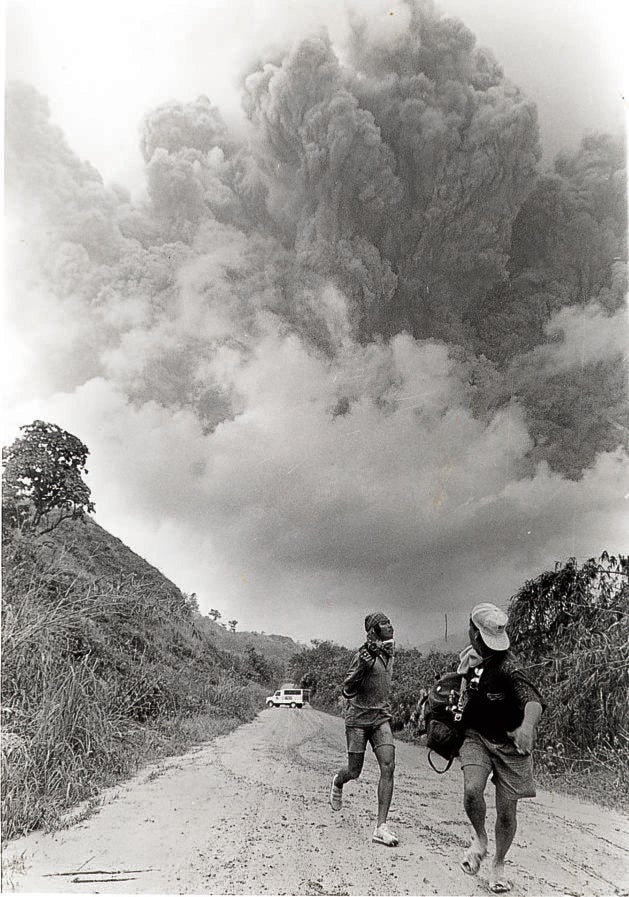 Novo says she earlier thought that to be a “bakwit” (evacuee) meant staying in “tent cities” only for a short period. It pains her to be a “bakwit” still, 30 years later.
But she says they are still thankful that the government moved them to donated lands at the foothills of the Zambales mountain range.
The only time the Aeta tribes openly objected to a relocation site was when they were sent to Dampay Salaza in Palauig, about 100 kilometers north of the volcano. “We wanted to be near Apo Namalyari,” says Balintay.
This spiritual connection to their deity prompted the Lakas Aeta tribesmen to march back to Sitio Ugek in Burgos in May 1991. They performed a ritual asking Apo Namalyari what made him so angry that he had to vent his wrath through Pinatubo. With a “mag-anito” (spirit guide) as medium, the tribe elders divined that drilling operations in search of geothermal power had disturbed Apo’s dwelling, according to Jugatan.

A total of 10 resettlement communities for Aetas—three in Pampanga, two in Tarlac and five in Zambales—were in place by 1992. A mission sent by the Japan International Cooperation Agency (Jica) in April that year, however, noted the “lack of water sources, prospects for making a livelihood and social services such as health care and education” for the evacuees. The donor organization warned that the sites “may then end up as a temporary refuge and not fulfill its original purpose of creating a permanent community for the Aeta.”
Eventually, Jica funded the Pinatubo Hazard Urgent Mitigation Project, which built dikes and bridges.
The resettlement project in three provinces began as an undertaking of the Housing and Urban Development Coordinating Council, an agency under the Office of the President. The council accepted donations of lands, which were then divided into lots at 100 square meters per beneficiary, says Roderick Ibañez, former National Housing Authority (NHA) manager in Central Luzon.
The land identification went through the Department of Environment and Natural Resources, with the Mt. Pinatubo Commission (MPC) handling the master list of those who received housing materials, says Ibañez.
The concerns raised by the Jica mission in 1992 apparently proved prophetic. According to Aeta leaders interviewed by the Inquirer last week, their tribes still lacked something that could make them really feel secure and rooted in their postcalamity life: a land to till.
But Ibañez maintained that no Aeta leader or group had formally requested the NHA for a piece of farmland or had asked to be returned to their villages.
According to Antonio Fernando, a retired military colonel who served as MPC director from 1994 to 1998, there was never a plan to bring the Aetas back to their ancestral land. Neither did the council, which was dissolved in 2000, offer to revive the old tribal villages.
The MPC’s focus back then was to get the Aetas out of harm’s way, he said, noting that the lahar avalanches from Pinatubo remained a serious threat up to 1997.
As of September 2020, the number of Aeta upland resettlement sites remained 10, housing a total of 6,578 families, NHA records show.
Outside these sites, there are a hundred Aeta families living either in the periphery of Clark, the former American air base, or in lowland neighborhoods at Barangay Madapdap, Mabalacat City, Pampanga.

That such a situation still exists 30 years since the Pinatubo eruption only showed there was no long-term plan for an organized return of the Aetas to their ancestral domains, according to the tribal leaders.
Nothing of that sort was heard from the NHA, which assumed some of the functions of the MPC, or from the National Commission on Indigenous Peoples (NCIP), which took over from the ONCC, says Candida Cabinta, head of NCIP Central Luzon’s technical and management services division.
But Cabinta recalls at least one attempt—by the local government—to bring the Aetas back. During her assignment in Zambales from 2002 to 2006, Botolan municipal officials launched a “Balik Barangay (return to villages)” program for the tribes. The program then involved constructing school buildings and distributing farming tools and inputs in their native Baytan.
“The Aetas have been returning individually, not en masse. In Zambales, they shuttle between the ancestral domains where they grow food and the resettlement where they get education and health care,” Cabinta explains.
The search for land to cultivate, the desire to be self-reliant by farming, and the need to secure their place in the ancestral domains are among the reasons why some Aeta families have returned there for good while others in greater numbers are forced to live practically in two very different worlds, the tribal leaders say.