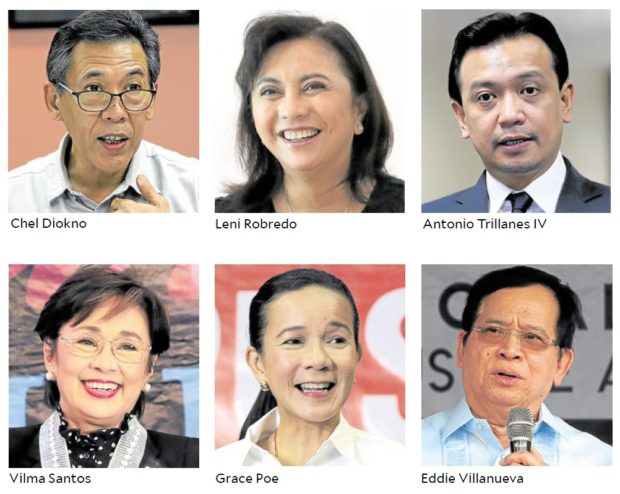 MANILA, Philippines — Vice President Leni Robredo, the acknowledged leader of the political opposition, a human rights lawyer, and four prominent political figures were included in a shortlist of possible presidential and vice presidential candidates of the 1Sambayan against the administration ticket in the 2022 national elections.

In an online event on Saturday that coincided with the celebration of the country’s 123rd Independence Day, the newly formed political coalition said it would put up a united slate of “democratic forces” to rectify President Rodrigo Duterte’s supposed errors in governance.

Poe, on the other hand, has joined the majority bloc in the Senate after challenging Duterte for the presidency in 2016.

Former Foreign Secretary Albert del Rosario, one of 1Sambayan’s convenors, said more names may be added to the list as the coalition looked beyond “winnability” in selecting the best candidates.

“Character, capability, and track record are also well-considered,” he said.

“From these choices, 1Sambayan, the coalition members and eventually the public, can have a say on who they believe will usher in the changes they hope for,” Del Rosario said.

He said Robredo and the five others had agreed to support whoever would be chosen as the official presidential and vice presidential bets of the coalition.

“We have listened to the problems and urgent concerns that Filipinos are hoping the next leader [of the country] will address,” Del Rosario said, adding that they were also conducting consultations with migrant workers, labor unions, youth organizations, and other sectors.

Fr. Albert Alejo, also a convenor of 1Sambayan, said the group would interview the nominees, conduct “due diligence” and come up with a “dossier” for each of them to finalize its lineup.

Alejo said they would also use information from by various interest groups, survey companies, online polls and those that would be generated during their public discussions.

“If we could come up with a consensus, then that’s it,” the Catholic priest said. “We’re not looking for saints, but the best [candidate] we could choose given the situation.”

In a brief video message, Robredo said she supported the group’s call for unity and stressed the need to include in the discussions the groups and individuals who did not share their political beliefs.

“I believe that the answer to our problems is not one, but everyone,” she said in Filipino. “If we don’t have a space for others in our hearts and don’t recognize that we all have a common aspiration for every Filipino, this aspiration will never be realized.”

Sharing his experience during the candidacy of former President Fidel Ramos in 1992, Carpio said he was optimistic that financial pledges from campaign donors would start coming in once 1Sambayan has decided on the “viable candidates,” including a full 12-member senatorial slate, “because they agree with us that we cannot allow another six years of a Duterte administration.”

The retired magistrate, who had locked horns with Duterte over the West Philippine Sea issue, said the group would also organize its own political machinery to campaign for the entire opposition ticket.

Shortly after the list was disclosed, Santos and Poe separately announced that they were declining the nominations.

“I sincerely thank 1Sambayan for considering me,” Santos said in a statement. “I have no plans for 2022. I am focused on assisting Lipa City in its vaccination program and in providing assistance to families who need it most.”

“Furthermore, I have my legislative duties to attend to,” said the former three-term Lipa mayor.

Poe said she was thankful for the people’s trust in her.

“But I have no plans to run for president in the coming elections,” she said in a statement in Filipino.

“As best as I can as a senator, I want to focus my attention on lifting our people out of this pandemic,” she said.

In a tweet, Trillanes said it was a “great honor” to be considered a possible presidential candidate of the opposition coalition.

“We trust in the wisdom of the convenors of 1Sambayan and we believe that this is the sole vehicle for the opposition’s victory in 2022,” Trillanes said.

Political analyst Manolo Quezon III, a columnist for the Inquirer, said 1Sambayanan’s choices would be questioned by people who “self-identify as oppositionists” and that its shortlist would “surely raise eyebrows among the various factions” of the opposition.

So who are the non-oppositionists in the group?

“That’s the thing: it’s as much the different groups that consider themselves opposition making the shortlist as anything, so this is what’s remarkable,” Quezon said. “For the minority identifying themselves as opposition these are the ones they collectively consider oppositionists.”

But what’s important is to “get the process going because change is impossible if our crab mentality won’t change,” he said.

“It will reveal a lot if the different groups can hold together long enough for the process to play out,’’ Quezon said.

Richard Heydarian, another political commentator and Inquirer columnist, said the people on the shortlist showed the opposition’s “flexible pragmatism” and a measure of its “discipline and unity” when it considered both “electoral strength” and broad base support.

“The list contains figures across the political spectrum in terms of social values, from liberal to religious conservative, but all share fundamental commitment to democratic values,” he said.

Even without Poe and the Manila mayor, “what we are seeing here is a semblance of discipline and unity on the part of the opposition, which has been rife with ideological divisions and petty rivalries through the years,” Heydarian said.

The “best chance” for an opposition victory in the presidential and vice presidential races is “if multiple allies of Duterte run in these elections,” he said.

But, a single opposition ticket could pressure the administration to also put up “a joint ticket with a formidable rival, including the Marcoses,” according to Heydarian.

He said that with Poe and Santos declining to run for higher office next year, “this is very much shaping up like a Leni-Trillanes or Leni-Diokno ticket.”

Read Next
Pinatubo Aetas still far from home
EDITORS' PICK
Another joke? Duterte mulls return of Balangiga bells to keep US away
Tips for a cheerful life
Duterte: When I said I will fight drugs in 6 months, I thought it was like in Davao
Connect to PH’s fastest network with new Signature Plan Lite at only P599 per month
Harnessing technology for quality education
Duterte’s SONAs: From wishing to resign to saying he’s inutile
MOST READ
Duterte acclaims Sotto: ‘He can become a good vice president’
Hidilyn shoots not only for gold but also for permanent place in PH sports history
Duterte’s SONAs: From wishing to resign to saying he’s inutile
Go to war with China over West PH Sea? It will be a ‘massacre’, says Duterte
Don't miss out on the latest news and information.