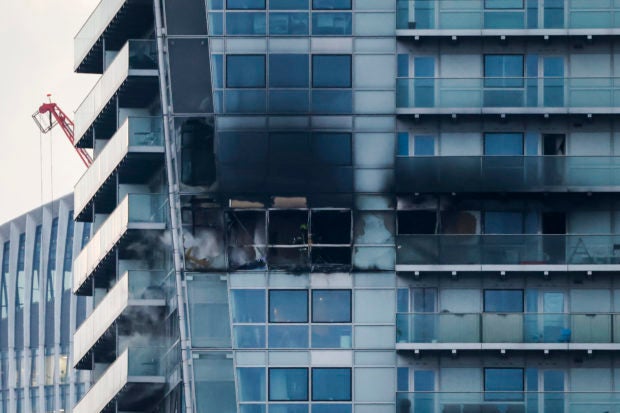 A photograph taken on March 7, 2022 shows the damages following a fire that broke out in the Relay Building, in Aldgate, east London. AFP

LONDON — More than 100 firefighters on Monday took over three hours to bring under control a blaze that broke out in a 21-story residential and commercial building in east London.

Some 60 people were forced to evacuate the building after the blaze broke out on the 17th floor and affected balconies on the 17th, 18th and 19th floors.

Station commander Chris Jenner, from the London Fire Brigade, called it a “dynamic and visible fire”, and said emergency line operators fielded more than 50 calls in the early stages.

“A woman was trapped by the nature of the fire on the 17th floor. She was given fire survival advice by control officers until firefighters located her,” he added.

“Fire crews used a fire escape hood to help lead the woman to safety via the internal staircase.”

Jenner said crews deployed a 64-meter (210-feet) turntable ladder — the tallest in Europe — to get water onto the fire from outside the building.

The blaze was eventually brought under control shortly after 7:00 pm.

“The professionalism, hard work and quick actions of control officers and firefighters limited the damage to the block and prevented serious injuries,” he added.

There was no immediate indication as to what caused the fire, which saw debris fall onto the road below, forcing it to be cordoned off.

In June 2017, a fire at the residential block of Grenfell Tower in west London killed 72 people. It was blamed on highly combustible cladding on the 24-storey block’s outside walls.

In January, the government said it would make developers contribute more to the cost of removing such cladding from all buildings in Britain, as a public inquiry continues into the Grenfell disaster.