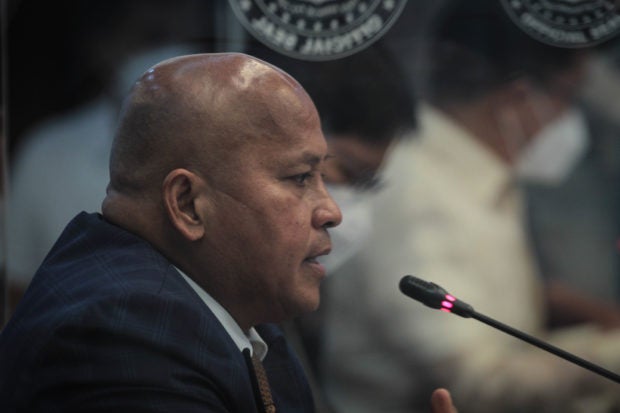 THE BALL IS IN PAGCOR’S HANDS: Sen. Ronald “Bato” Dela Rosa, chairman of the Committee on Public Order and Dangerous Drugs, presides over on March 4, 2022, the continuation of a public inquiry into the rising number of missing persons allegedly involved in “sabong” (cockfighting) and “e-sabong” and other related incidents. Senate PRIB file photo / Voltaire F. Domingo

“So  pagbigyan natin sya kung ano talaga ang officially ang stand nya  to this issue. I may be wrong  in my interpretation…” he added.

According to the senator, his reading of the President’s  remark on the issue was “pure speculation” and not Duterte’s official  statement.

He nevertheless assured that he would not change his stand against e-sabong or online cockfighting.

Dela Rosa, who previously headed the national police force, said he still considers himself a law enforcer, and not a traditional politician or trapo.

Dela Rosa  is leading the probe on missing cockfighting enthusiasts being the chairman of the Senate  committee on public order and dangerous drugs.

This was contrary to Dela Rosa’s earlier claim that the President gave his nod to the suspension as proposed by the Senate  through a resolution  signed by 23 of 24 senators.