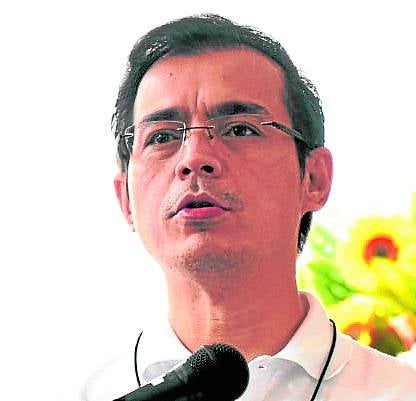 MANILA, Philippines — Aksyon Demokratiko standard bearer Isko Moreno Domagoso on Monday said if he is elected president, he will push for food self-sufficiency amid the uncertainties brought about by the ongoing political turmoil in Ukraine which is a major source of imported wheat, an important ingredient in making bread.

Moreno, along with Manila Vice Mayor Honey Lacuna, visited the fresh batch of food boxes which are scheduled for distribution this month of March to 700,000 families residing in the six districts of Manila. This is part of the city government’s Food Security Program (FSP), which Moreno launched at the height of Covid-19 pandemic in March 2020.

The political crisis between Russia and Ukraine is seen to threaten the food supply and livelihoods of people in Europe, Africa and Asia who rely on the vast, fertile farmlands of the Black Sea region known as the “breadbasket of the world.” Russia and Ukraine combine for nearly a third of the world’s wheat and barley exports. Ukraine also is a major supplier of corn and the global leader in sunflower oil, used in food processing.

While there have not yet been global disruptions to wheat supplies, prices have surged 55% since a week before the invasion of Ukraine amid concerns about what could happen next. If the war is prolonged, countries that rely on affordable wheat exports from Ukraine could face shortages starting in July, according to the International Grains Council.

Aside from the crisis in Ukraine, Moreno is not discounting the possibility of another flashpoint nearer the Philippines and this is the brewing conflict between China and Taiwan which is separated by a narrow sea lane called the Taiwan Strait.

“If food security is the number one threat to national security, then the country and the state must invest on our Filipino farmers. And if we can uplift our farmers’ lives, we will make a massive stride towards eradicating poverty,” the 47-year-old presidential candidate said.

Moreno had earlier vowed to prioritize the passage of a measure condoning the loans of agrarian reform beneficiaries (ARBs) from the Land Bank of the Philippines as part of his government’s efforts to support and protect Filipino farmers and ensure Philippine food security.

Agriculture is one of the main pillars of Team Isko’s 10-point Bilis Kilos Economic Agenda which is his administration’s blueprint to accelerate human and economic growth.

Besides giving agrarian reform beneficiaries (ARBs) the rightful ownership of the lands awarded to them, Moreno said among the first economic policies that his government will introduce is to cut the excise tax of petroleum products by 50 percent to bring down the prices basic commodities and raise the income of farmers and fisherfolks.

The Aksyon Demokratiko presidential bet had said his administration will buy the rice and vegetables of local farmers at the right price to assure them of their income and help them become competitive. He will also issue clear guidelines about the strict importation of agricultural products to make sure that local producers can sell their products first before importation is made.

Moreno said protecting the welfare and livelihood of farmers also calls for a review of the Rice Tariffication Law (RTL) which allowed an influx of cheap rice from abroad resulting to lower domestic prices and hurting farmers’ income.

President Rodrigo Duterte signed the RTL (Republic Act No. 11203) on Feb. 14, 2019, which ended the National Food Authority’s power to issue import permits, removed quantitative restrictions on rice imports and replaced them with a 35 percent import tariff. This allowed an influx of cheap rice from abroad to the detriment of Filipino farmers’ livelihood.

Moreno’s commitment to farmers also include bringing down the prices of fertilizers which have recently gone up as some unscrupulous businessmen are reportedly cornering the supply from small traders who are willing to sell them at a slightly higher price.

Speaking before Kalinga province farmers, Moreno also vowed to go hard against smugglers of rice, garlic, onion and vegetables as this is the primary reason why farmers cannot sell their produce on good prices.

Isko Moreno willing to give aid to OFWs returning from Ukraine