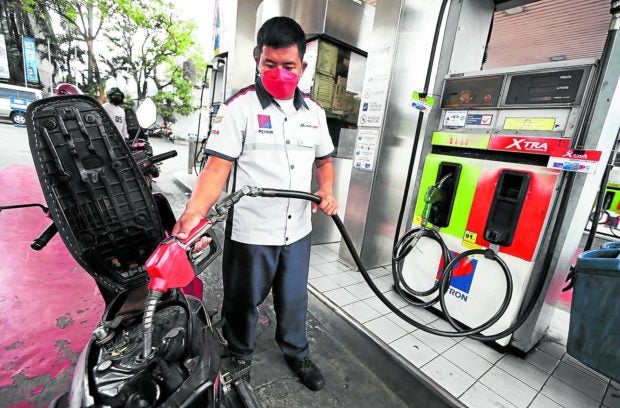 A man fills up a motorcycle gas tank at a gasoline station in East Avenue, Quezon City on Feb. 21, 2022. Another fuel price hike is expected in the coming days among main gasoline companies. (INQUIRER PHOTO / NINO JESUS ORBETA.)

“Maybe the government would no longer punish us and we only wish for them to release this kind of assistance already, since prices of all oil products have been increasing,” Modesto Floranda, national president of Pagkakaisa ng mga Samahan ng mga Tsuper at Operator Nationwide (Piston), said in a phone interview on Saturday.

“When you say ayuda (aid), it should not [take] weeks or months before [that aid is released],” he added.

A total of 377,443 beneficiaries are due to receive funds worth P6,500 per jeepney driver or operator, according to the Land Transportation Franchising and Regulatory Board (LTFRB).

The agency said last month that the subsidy program has been expanded to cover drivers of UV Express, public utility buses, minibuses, taxis, tricycles and vehicles under the Transport Network Vehicle Service and Tourist Transport Service.

Floranda lamented how red tape may delay the release of the money.

“After filing that, of course, we will have to wait days or even weeks before we can finally receive that fuel subsidy or wait if our application for the assistance was approved,” he said.

Among the requirements for applying for the subsidy are a driver’s license and the jeepney’s registration — or deed of sale if the vehicle was bought from another owner—as well as the customary forms to be filled out at the LTFRB.

The program was allocated P2.4 billion under the General Appropriations Act of 2022.

Economic managers will meet on Monday to tackle the impact of fuel costs on local commodities.

Rosemarie Edillon, undersecretary for policy and planning of the National Economic and Development Authority (Neda), said prices of domestic goods were not as affected, but that condition may change.

“We will exchange analyses with the Bangko Sentral ng Pilipinas, with the Department of Finance. The Neda is doing an analysis and then we will look at the estimates. We will also discuss what we should do about it,” she said at Saturday’s Laging Handa briefing.

Rino Abad, director of the Oil Industry Management Bureau of the Department of Energy, said in that presentation: “[D]efinitely, you will see a significant increase next week” in fuel prices.

Global crude prices continued to rise since Feb. 24 when Russia launched its full-scale invasion of Ukraine.

An official of Manila-based multilateral lender Asian Development Bank (ADB) said that apart from the effects of higher oil and gas prices, the conflict will have little consequence on Asian economies.

ADB chief economist Albert Park said in a tweet on Saturday that most of Asia would have limited exposure in terms of trade and investments.

“Developing Asia,” in particular, accounted for only 5 percent of foreign direct investments (FDI) in Russia, he said.

Meanwhile, 2020 data compiled by London-based think tank Capital Economics showed that Philippine exports to Russia were negligible or almost zero as a share of the gross domestic product (GDP). Imports from Russia and Ukraine accounted for 0.2 percent and nearly zero, respectively.

Also that year, Russia’s FDI in the Philippines was nearly zero as a percentage of GDP, just like the country’s FDI in Russia.