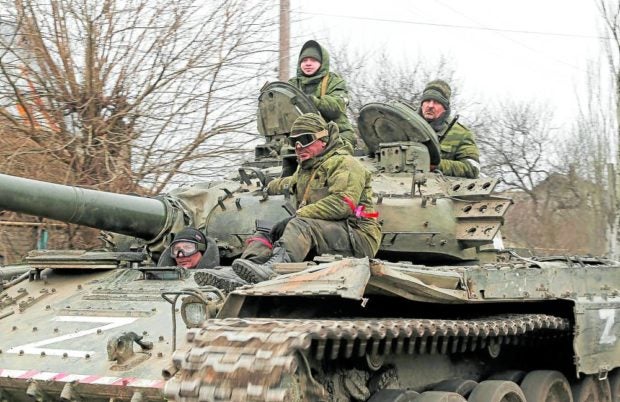 SEPARATIST CREW | Service members of pro-Russian troops in uniforms without insignia are seen atop a tank with the letter “Z” painted on its sides in the separatist-controlled settlement of Buhas (Bugas), as Russia’s invasion of Ukraine continues in the Donetsk region. (PHOTO BY REUTERS)

LONDON — Oil prices soared on Wednesday above $113 per barrel and natural gas spiked to a record peak, as investors fretted over key producer Russia’s intensifying assault on Ukraine.

Later on Wednesday, traders will digest a meeting of the Organization of the Petroleum Exporting Countries and other major producers, including Russia, who will discuss whether to ramp up output to temper spiking prices that fan inflation.

US President Joe Biden said that the United States would join a 30-country deal to release 60 million oil barrels to help temper the surge in crude prices, though analysts have warned such moves would have a limited impact.

“The war in Ukraine that Russia is waging with increasing severity is causing oil prices to skyrocket,” said Commerzbank analyst Carsten Fritsch.

Europe’s stock markets however rallied, despite earlier Asian losses, as energy majors won a shot in the arm from crude oil.

Added to the picture, Europe’s reference Dutch TTF gas price rocketed by around 50 percent to forge an all-time record 194.715 euros per megawatt-hour.

“The big fear is the prospect of (a) Western import ban on Russian oil and gas—or retaliation from Russia in cutting its energy exports to Europe.”

Russia is one of the world’s biggest producers of natural gas and oil and is a major exporter of other key commodities including aluminum.

The price of aluminum, used in a variety of items including drinks cans and aircraft components, hurtled to an all-time peak of $3,552 per tonne on Wednesday.

Ukraine and Russia are two of the world’s biggest producers of corn and wheat, which both soared to historic heights on Wednesday too.

Russian President Vladimir Putin’s invasion of its neighbor has sparked sharp swings across global markets over the past week, while Western sanctions prompted a dramatic collapse in the ruble.

The crisis has seen numerous countries hammer Moscow with a series of wide-ranging sanctions that have isolated Russia and threatened to crash its economy.

But the main source of unease on trading floors is crude, which has rocketed since Russia began preparing to invade.

The conflict in eastern Europe comes with oil prices already elevated owing to tight supplies and a strong recovery in global demand as economies reopen from pandemic-induced lockdowns, fueling inflation around the world.

Eurozone inflation soared in February to a new record high of 5.8 percent mainly on the back of surging energy prices, the European Union’s official statistics agency Eurostat said on Wednesday.

Ukrainians fighting on in biggest city yet claimed by Russia